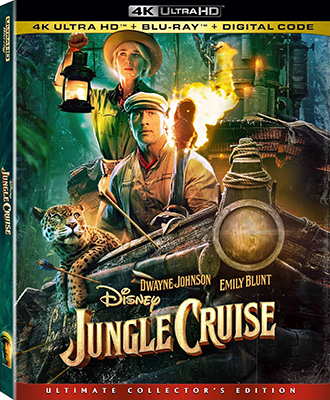 In the spirit of a classic ride known for its jokes, here’s another one: Have you heard Disney’s remaking the Pirates of the Caribbean movie? It’s called Jungle Cruise.

Based on one of the original rides at Disneyland, Jungle Cruise owes a lot to its theme park companion, and not just the idea of turning a Disney parks boat ride into a big-budget adventure movie. As with 2003’s Pirates of the Caribbean: Curse of the Black Pearl, Jungle Cruise features a legendary treasure of sorts, and a cadre of immortal warriors cursed by it.

In this case, the primary plot device is a mythical tree in the middle of the Amazon jungle whose pedals can cure any disease. An expedition of conquistadors disappeared searching for the tree hundreds of years earlier, but were claimed by the jungle. The story picks up in 1916, with explorers Lily Houghton and her brother, MacGregor, setting off to Brazil in search of the tree. To travel down the Amazon river, they charter a boat from Frank (Dwayne Johnson), a cruise skipper desperate for money to pay off local kingpin Nilo (Paul Giamatti).

Also after the treasure is a German prince named Joachim (Jesse Plemons), who is based on the actual son of Kaiser Wilhelm II. To spice things up he brings a submarine to sail down the river.

The slapstick action sequences also bring to mind films such as The Mummy (the campy 1999 version, not the awful 2017 remake). According to the bonus materials, the filmmakers themselves drew inspiration from The African Queen, Romancing the Stone and Raiders of the Lost Ark, and it shows (1951’s African Queen being a primary inspiration for the original ride as well).

Though derivative, Jungle Cruise manages to deliver a fun adventure that takes advantage of its charismatic leads. It also pays a lot of homage to the original ride that fans should appreciate, particularly in regards to the famous puns that ride skippers are known for reciting.

The primary bonus feature on the Blu-ray (also available with digital versions and on Disney+) is the film’s “Expedition Mode,” which is basically a pop-up trivia track that plays with the film. Aside from a few facts about the production, the original ride and some of the jungle animals encountered on the voyage, it’s a rather lackluster offering in terms of taking a deep dive into the material. Why not delve more into the biography into the character of Prince Joachim, a real person whose history the filmmakers have coopted in order to make him the mustache-twirling villain of the piece? Instead, the pop-up text just offers more bad Jungle Cruise-style puns.

The other extras are more-standard fare, highlighted by nearly 17 minutes of deleted scenes that fill in more aspects to the world of the film.

The general making of the film is covered in a 13-minute featurette, further supplemented by a five-minute video about the performances of Johnson and Blunt, and a 15-minute “Creating the Amazon” delves into the visual effects, production design and crafting the impressive set of the Brazilian port town.

Then there’s a 14-minute “Once a Skip, Always a Skip,” which profiles the ride and features actual ride skippers discussing their experiences with the attraction.

Rounding out the extras is a two-and-a-half-minute gag reel.