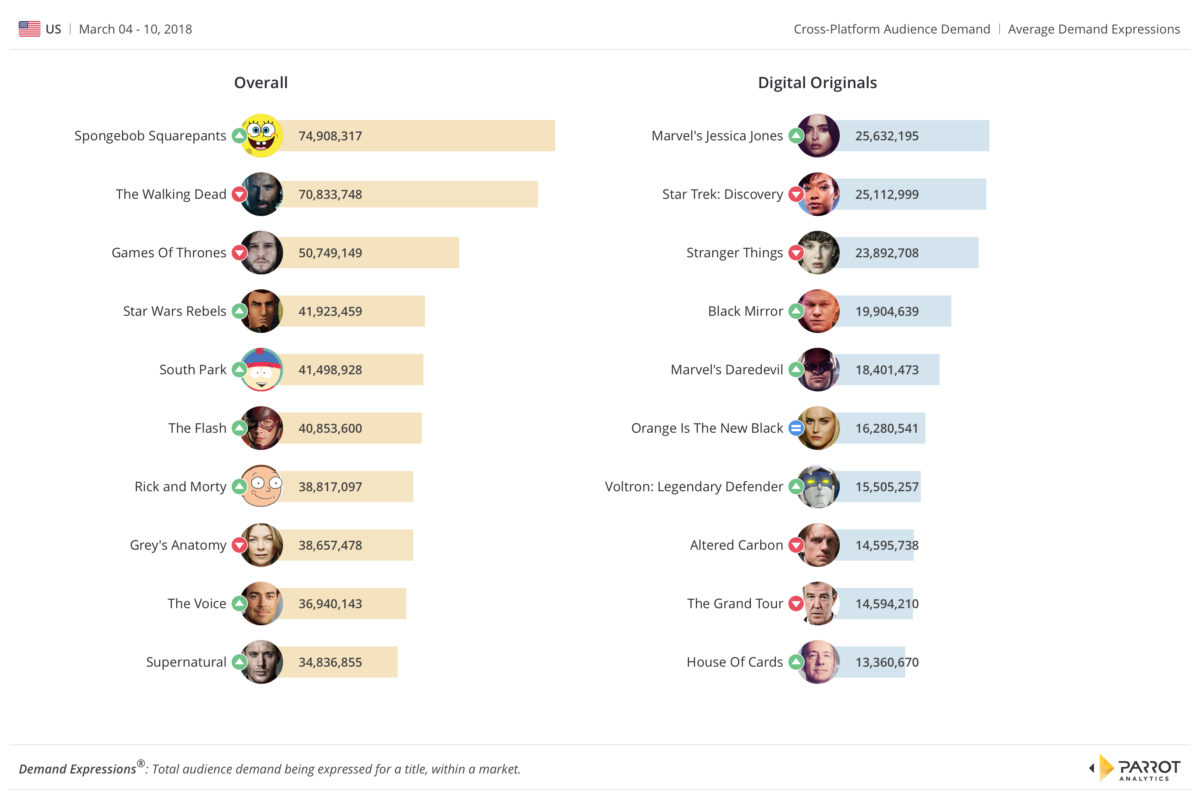 Marvel’s “Jessica Jones” was the most in-demand digital original title for the week that ended March 10, according to Parrot Analytics’ Demand Expressions data. With the launch of season two on March 8, the Netflix/Marvel superhero series shot up to No. 1 on the digital originals chart from No. 7 the prior week,  displacing the longtime chart-topper “Star Trek: Discovery,” from CBS All Access, which slipped to No. 2 after eight weeks in the top spot.

The new season of “Jessica Jones” is a change of pace for the once-action-heavy show, as it focuses on the personal struggles of being a superhero rather than on combat and bloodshed.

Marvel’s “Daredevil” saw its demand rise 30% from the previous week as new artwork for the upcoming season was made public, bumping it up the chart to No. 5 from No. 9 the prior week.

“Black Mirror” rose up a notch to No. 4 from No. 5 on word that a new season has been ordered. And “Voltron: Legendary Defender” debuted on the chart at No. 7 after the March 5 launch of its fifth season.

Three of the most prominent Netflix titles have been in the media spotlight: “Stranger Things”, whose creators have been accused of verbal abuse, slipped to No. 3 from No. 2 but saw its demand spike 10%.

“Orange Is the New Black,” which fell out of the top 10 after finishing the previous week at No. 6, was the subject of a Hollywood Reporter story that theorized creator Jenji Kohan might split the cast into two new prisons.

Finally, the trailer for the final season of “House of Cards” was released on March 4, showing Claire Underwood at the helm. This may have contributed to a demand uptick of 87% for the political drama, putting it back on the digital originals chart at No. 10.

On the overall TV shows chart, “SpongeBob SquarePants” rode a sharp increase in demand to move up to No. 1 from No. 3 the previous week, ahead of both “The Walking Dead” and “Game of Thrones.” This increase in demand was likely due to fictitious cancellation rumors.

Other animated titles — “Star Wars: Rebels” (ranked at No. 4) and “Rick and Morty” (No. 7) — also experienced a surge in demand. “Rebels” aired its final episode March 5.

Also on the overall TV shows chart, The CW’s “Supernatural” reappeared in the top 10 after news of a crossover with Scooby-Doo.