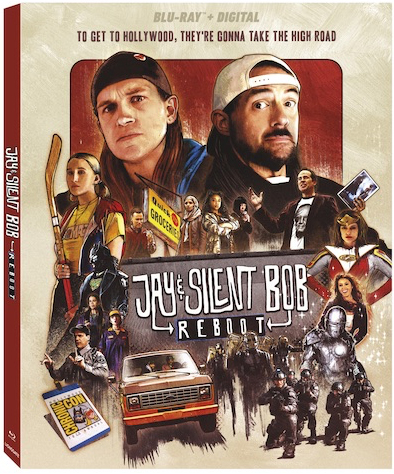 The latest addition to Kevin Smith’s View-Askewniverse is an unexpected treat for longtime fans of the filmmaker’s work. That it even exists is somewhat of a miracle.

Smith had been trying to make Clerks 3, but when one of the key actors dropped out, he shelved the project. With progress on a Mallrats sequel also stalled, Smith instead wrote another “Jay & Silent Bob” movie, with the urging of his long-time friend and co-star Jason Mewes, who plays the stoner Jay in the films alongside Smith’s Silent Bob. But before production began, Smith suffered a heart attack in early 2018, though he eventually recovered.

As a result, Jay & Silent Bob Reboot might be Smith’s most personal film since 1997’s Chasing Amy, though in a completely different way. Where that film, his third, was an introspective rumination on the fleeting nature of young love, his latest romp is a comedic reflection of his entire career, and more often than not a parody of it, while also taking aim at Hollywood’s penchant for remakes, reboots and an endless string of comic book movies.

Chasing Amy also happens to be an apropos starting point for dissecting Reboot, since that’s the film that gave birth to the idea of the Jay and Silent Bob drug dealer characters being the inspiration for the fictional “Bluntman and Chronic” comic book featured at the heart of that film’s story.

Reboot unabashedly tells the same story, albeit updated, as 2001’s Jay and Silent Bob Strike Back, in which the duo, fearing damage to their reputations, trekked from New Jersey to Hollywood in an attempt to stop a film version of “Bluntman and Chronic” from being made.

Jay and Silent Bob end up profiting from that film (see Clerks II), but after 18 years the studio wants to reboot it, and through some legal maneuvers manage gain copyright control over the duo’s actual identities, preventing them from using their own names. As a result, they scheme to return to Hollywood to disrupt production of the reboot, too. The twist now is that the reboot’s director is Kevin Smith, playing a fictional version of himself.

Along the way, Jay and Silent Bob join forces with a rebellious teen (played by Smith’s real-life daughter, Harley Quinn Smith) and her friends, as they make their way to “Chronic-Con,” a blatant spoof of Comic-Con. Smith manages to work references to nearly all his previous movies into the adventure, including updating the audience on what happened to a few of the main characters from the shared universe (and even answering a 25-year-old question that lingered back to his original film, 1994’s Clerks).

This is all catnip for Smith’s fans, who can easily forgive the juvenile humor and crude behavior surrounding the central antagonists, even as the story veers off the rails in its final act. Such are the trademark selling points of Smith’s works, not drawbacks, in a way only someone such as Smith could get away with. These are at their core stoner comedies, after all.

Sophistication isn’t the goal here, just the boundless energy and sense of fun of a pop-culture-obsessed filmmaker embracing what he loves. Smith even manages to sneak in a few heartfelt moments of character, paying off decades of the audience’s investment in their stories.

And, seemingly as a result of the goodwill generated by the film’s roadshow tour, the departed Clerks III cast member decided to sign up after all, and it looks like that film is now a go, too.

The film’s home video editions offer a few interesting, if somewhat unstructured, behind the scenes material. Primary among them is nearly an hour of cast interviews that have been cobbled together as some sort of ersatz making-of documentary. Presenting their thoughts without the framework of an interviewer, they mostly talk about their characters and the wackiness of the story.

Then, there’s a separate half hour of Smith and Mewes interviewing their co-stars.

Rounding out the extras are a 10-minute blooper reel and two minutes of Smith and Mewes fixing their Jay and Silent Bob hair.