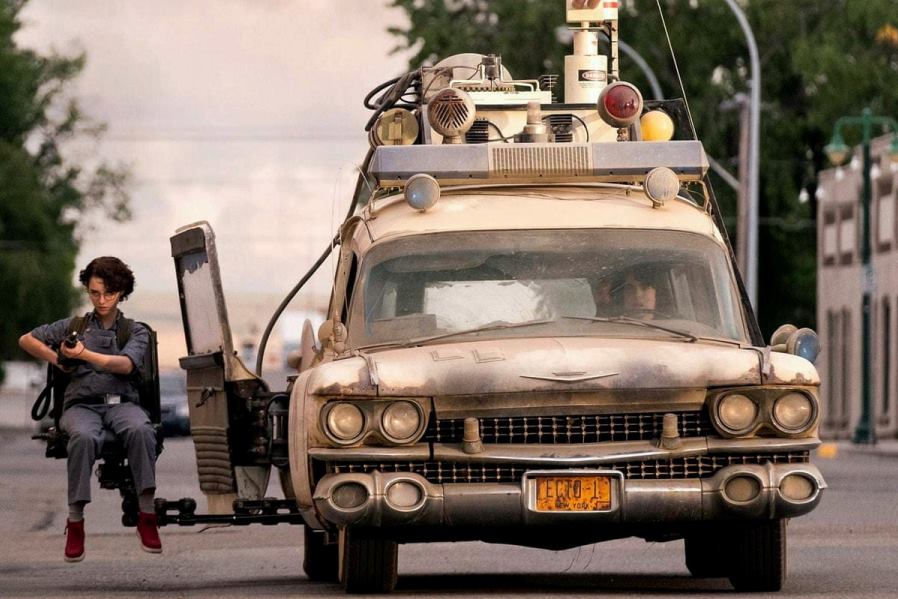 The most notable titles available for home viewing Jan. 4 arrive through digital retailers, including Ghostbusters: Afterlife, King Richard and Last Night in Soho, while the week’s top newcomer on Blu-ray and DVD is the horror film Antlers.

Ghostbusters: Afterlife becomes available for digital purchase Jan. 4 from Sony Pictures Home Entertainment. The sequel to the two 1980s “Ghostbusters” movies from director Jason Reitman and producer Ivan Reitman, it follows a single mom and her two kids who arrive in a small town and begin to discover their connection to the original Ghostbusters and the secret legacy their grandfather, an original Ghostbuster, left behind. It will be available on 4K Ultra HD, Blu-ray and DVD Feb. 1.

The biopic King Richard, starring Will Smith, arrives for premium digital purchase and rental Jan. 4 from Warner Bros. Home Entertainment. Based on the true story, the film follows the uplifting journey of a family whose unwavering resolve and unconditional belief ultimately delivers two of the world’s greatest sports legends. Armed with a clear vision and a 78-page plan, Richard Williams (Smith) is determined to write his daughters, Venus (Saniyya Sidney) and Serena (Demi Singleton), into history. Training in Compton, Calif., on abandoned tennis courts — rain or shine — the girls are shaped by their father’s unyielding commitment and their mother’s (Aunjanue Ellis) balanced perspective and keen intuition, defying the seemingly insurmountable odds and prevailing expectations laid before them. It will be available on 4K Ultra HD, Blu-ray and DVD Feb. 8.

The psychological thriller Last Night in Soho also arrives for digital purchase Jan. 4, from Universal Pictures Home Entertainment. Directed by Edgar Wright (Baby Driver, Shaun of the Dead, The World’s End), the film follows Eloise (Thomasin McKenzie, Jojo Rabbit, Old), an aspiring fashion designer who is mysteriously able to enter the 1960s. There, she encounters dazzling wannabe singer Sandie (Anya Taylor-Joy, Emma, “The Queen’s Gambit”). But the glamour is not all it appears to be, and the dreams of the past start to crack and splinter into something dark. It arrives on 4K Ultra HD, Blu-ray and DVD Jan. 18. 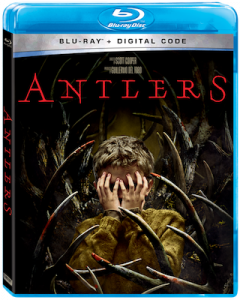 Disney-owned Searchlight Pictures’ horror thriller Antlers arrives on Blu-ray and DVD Jan. 4. Directed by Scott Cooper and produced by Guillermo del Toro, the film explores the myth of the dreaded “wendigo” as a small-town Oregon teacher (Keri Russell) and her brother (Jesse Plemons), the local sheriff, seek to help a troubled young boy who possesses a strange secret. It earned $10.6 million at the domestic box office.

The lockdown comic drama Together arrives on DVD Jan. 4 from Distribution Solutions and Bleecker Street’s Decal. The film, starring James McAvoy, Sharon Horgan and Samuel Logan, follows a husband and wife who are forced to re-evaluate themselves and their relationship through the reality of the COVID-19 lockdown. She is a coordinator for all of Europe at a refugee charity. He is a self-employed, self-made man who runs a boutique computing consultancy. Together is directed by Stephen Daldry and Justin Martin.

Paramount releases the crime thriller Ida Red on DVD Jan. 4. The film is already available for digital purchase and on demand. In the film, crime boss Ida “Red” Walker (Oscar winner Melissa Leo) turns to her son Wyatt (Josh Hartnett) to pull off one last heist to get out of prison. But with the FBI closing in, Wyatt must choose between family and freedom. In addition to Leo and Hartnett, the film also stars Sofia Hublitz, William Forsythe, Deborah Ann Woll, George Carroll, Mark Boone Junior, Beau Knapp and Frank Grillo.

Sony Pictures Home Entertainment releases the drama A Mouthful of Air for digital purchase and on VOD Jan. 4. Amanda Seyfried portrays Julie Davis, a best-selling children’s author and devoted wife and mother. While her books deal with unlocking childhood fears, she has yet to unlock the dark secret that has haunted her own life. But when her second child is born, events occur that bring that secret to the fore, and with it, a crushing, powerful battle to survive. Directed by Amy Koppelman and based on her novel, the film also stars Finn Wittrock, Jennifer Carpenter, Michael Gaston, Amy Irving and Paul Giamatti.

The action drama The Way will be available for digital purchase, on cable video, on demand and DVD Jan. 4 from Gravitas Ventures in North America. Directed, written and produced by Dastan Khalili of Alliance of Light Films, The Way debuted theatrically in November. The Way is the story of Jane Arcs (Eli Jane), who 13 years ago was condemned to death after brutally killing her opponent in an underground street fight. Now, in just 24 hours, Jane will be executed for her crime. During her years on death row, Jane has undergone a major evolution under the tutelage of a fellow inmate and Qi Gong Master Xin (Joan Wong/ the niece of Kung-Fu Master Wong Jack Man, who was best known for his controversial duel with Bruce Lee in 1964), learning the way of Qi Gong and ostensibly gaining supernatural abilities. As the day of her execution arrives, Jane embraces her punishment in the spirit of transformation. Max Stone (Kelcey Watson), Jane’s boyfriend as well as correctional officer and part of the execution tie down team, has very different ideas. He is willing to do anything to save Jane. 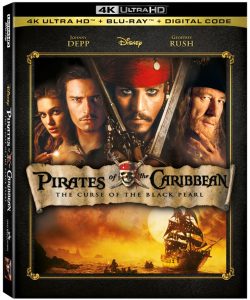 The Walt Disney Co.’s Pirates of the Caribbean: The Curse of the Black Pearl arrived on 4K Ultra HD Blu-ray Disc for the first time Jan. 2, with high dynamic range (HDR) picture quality and Dolby Atmos. The 2003 film, based on a popular Disney theme park ride, spawned one of the most successful live-action franchises in history, with a worldwide theatrical gross of over $4.5 billion. The “Pirates” series, consisting of five films, is also the first movie franchise in which two or more films grossed in excess of $1 billion. In the original “Pirates,” the roguish yet charming Captain Jack Sparrow’s (Johnny Depp) idyllic pirate life capsizes after his nemesis, the wily Captain Barbossa (Geoffrey Rush), steals his ship, the Black Pearl, and later attacks the town of Port Royal, kidnapping the governor’s beautiful daughter Elizabeth (Kiera Knightly). In a gallant attempt to rescue her and recapture the Black Pearl, Elizabeth’s childhood friend, Will Turner (Orlando Bloom) joins forces with Jack. What Will doesn’t know is that a cursed treasure has doomed Barbossa and his crew to live forever as the undead.

Shout! Factory and GKIDS are re-releasing the 2019 anime film Weathering With You 4K Ultra HD Blu-ray combo pack in standard packaging Jan. 4. The 4K disc was previously released in November 2020 as part of a limited-edition Blu-ray boxed set that included a CD soundtrack, booklet, mini-poster and additional swag. The film from director Makoto Shinkai and the creative team, including producer Genki Kawamura, behind the critically-acclaimed Your Name, features music from the hit band RADWIMPS, and is backed by an all-star voice cast including Lee Pace, Alison Brie and Riz Ahmed. The summer of his high school freshman year, Hodaka runs away from his remote island home to Tokyo, and quickly finds himself pushed to his financial and personal limits. The weather is unusually gloomy and rainy every day, as if to suggest his future. He lives his days in isolation, but finally finds work as a writer for a mysterious occult magazine. Then one day, Hodaka meets Hina on a busy street corner. This bright and strong-willed girl possesses a strange and wonderful ability: the power to stop the rain and clear the sky. 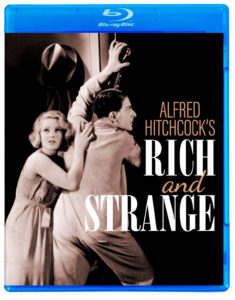 Kino Lorber on Jan. 4 releases Rich and Strange (1931), one of Alfred Hitchcock’s earliest films, on both DVD and Blu-ray Disc. Also known as East of Shanghai, the film is a product of Hitchcock’s early directorial endeavors in the pre-World War II British film industry. Fred Hill (Henry Kendall) and his wife Emily (Joan Barry) lead a boring existence in the London suburbs. When the Hills come into an inheritance from a wealthy uncle, Fred quits his mundane job and they embark on a world cruise to get a taste of the high life. But all does not go as planned as the couple’s voyage becomes fraught with treacherous romantic duplicities.

Crime of the Century (1933) gets a Blu-ray Disc-only release from Kino Lorber on Jan. 4. Directed by William Beaudine, this classic whodunit centers around Dr. Emil Brandt, a hypnotist who bursts into a police station and confesses to a murder. The only problem is, the murder he’s confessed to hasn’t happened yet — although stolen money and dead bodies soon turn up. The film’s star-studded cast includes Jean Hersholt (13 Washington Square, Heidi), Wynne Gibson (Night After Night, Her Bodyguard), Stuart Erwin (Before Dawn, Our Town) and Frances Dee (Little Women, I Walked with a Zombie). 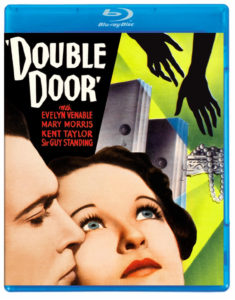 Kino Lorber Jan. 4 also releases another Blu-ray Disc exclusive, Double Door, from 1934. Directed by  Charles Vidor (Gilda, A Farewell to Arms), this gothic chiller has Mary Morris reprising her acclaimed Broadway role as one of the most dastardly villains of all time, Victoria Van Brett. In a spooky New York City mansion, the Van Brett matriarch rules her clan with an iron hand. The sinister spinster schemes to ruin any chance her siblings might have for happiness. Evil lurks around every corner of this old dark house, and especially in a secret room behind a certain double door. 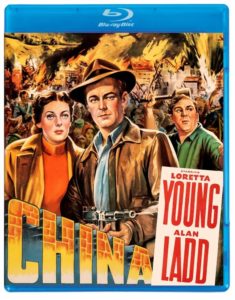 Another Jan. 4 Kino Lorber catalog release on Blu-ray is China, a 1943 wartime drama from director John Farrow that stars Alan Ladd as an American gasoline salesman in 1941 China who supplies his wares to the highest bidder — in this case, the enemy Japanese. His unbiased business philosophy is tested on a trip to Shanghai when he meets an American schoolteacher (Loretta Young) and her Chinese students, who tell him of Japanese cruelty. In a surprise show of allegiance, he joins a band of Chinese guerrillas on a daring heist. The film set a Hollywood record of using 70 pounds of precious, rationed gunpowder.

Kino Lorber Jan. 4 also releases on Blu-ray 1947’s Golden Earrings, an adventure film in which Marlene Dietrich plays a lusty gypsy. Escaping from the Nazis, British colonel Ralph Denistoun (Ray Milland) and his partner arrange to meet in Stuttgart to steal Hitler’s poison gas formula. On the journey, Denistoun meets Lydia (Dietrich), who keeps him out of harm’s way. Only with the help of the extraordinary gypsy woman can he finish the mission that will make him a hero in this tale of espionage and intrigue from Hollywood ace Mitchell Leisen, the director of Death Takes a Holiday, Hands Across the Table, Easy Living, Midnight, Arise, My Love and No Time for Love. 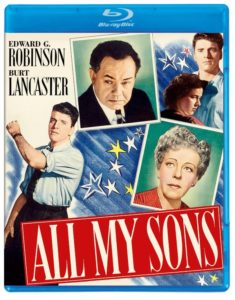 Another Jan. 4 Kino Lorber Blu-ray is 1948’s All My Sons, a drama based on the work of acclaimed playwright Arthur Miller and stars Edward G. Robinson and Burt Lancaster. The film is a wartime tragedy of a family torn apart and forced to come to terms with their inner demons. Chris Keller (Lancaster) returns home from war with news of his impending engagement to Ann Deever (Louisa Horton), the fiancée of his missing-in-action and presumed-dead brother. As the ghosts of the past creep back into the Keller home, Chris’s father (Robinson) makes a stunning and painful revelation that will change the family forever. Directed by Irving Reis and shot by Russell Metty (Touch of Evil, Spartacus), the film has been hailed as unforgettable tale of moral dilemmas.