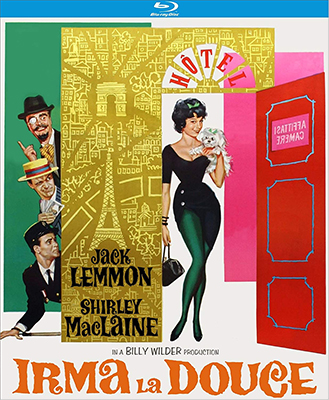 As both the most commercially successful movie Billy Wilder ever enjoyed and, paradoxically, the last box office hit of his career, Irma La Douce seems like something of a benchmark oddity when viewed from 55 years of perspective. This, of course, assumes that you can even employ such a diminutive term to describe a 143-minute comedy that just misses tying Avanti! as the longest the writer-director ever made. Irma doesn’t hold its length nearly as well as that later masterpiece, which has probably contributed to the decline in its reputation, though critics weren’t all that crazy about it at the time. But Kino Lorber’s new Blu-ray reminds us of how gorgeous the movie is despite its inherently squalid content — and how its recent lack of availability in a decent edition has helped is lose track of its compensations. Because there are lots of them.

By 1963, the Last Rites hadn’t yet been read for Hollywood’s Production Code, but the cemetery plot had been bought and the siblings were already arguing over the china. Even so, the sight of colorfully dressed prostitutes all lined up on a Parisian street courtesy of Alexandre Trauner’s magnificent production design — among the best I’ve ever seen — was something new in blockbuster Hollywood entertainment. On one of two excellent bonus Blu-ray commentaries here, ‘A’-team film historian Joseph McBride recalls the Catholic guilt that resulted in his taking three incremental viewings to complete the picture once Shirley MacLaine’s scanty costumes and bare shoulders started getting to his teenaged self in Wisconsin the way they did to mine in Ohio, even if we lapsed Presbyterians never had to deal with such hypocritical nonsense. (Martin Scorsese once told a similar story to me on the stage of the AFI Theater, recalling his own out-of-the-theater-and-back-in wrestling with John Farrow’s 1957 The Unholy Wife.) Oddly enough, there are no actual sex scenes or even off-color language beyond Wilder and Diamond’s — that would be longtime co-writer I.A.L Diamond’s — penchant for double entendres. There’s also a second commentary by Brit film historian Kat Ellinger that’s also good as well and also compatible — which like McBride’s cares little about being scene-specific. It devotes a lot of time to subjects that obviously intrigue — like MacLaine’s career and the varied historical approaches to treating prostitution as a subject.

Irma was based on a stage musical, but Wilder didn’t like musicals, and during production he kept jettisoning songs until none were left. Instead, he had Andre Previn adapt portions of its melodies with extraordinary romance and passion into a) an Oscar for himself; and b) a fabulous soundtrack album I literally wore out on vinyl in ’63. A rose-colored rendering, Irma certainly never poses as realism and almost has the jaunty spirit of a musical — though it does devote a lot of well-utilized screen time to the economics of prostitution and how a lot of the monetary compensations (which aren’t much to speak of, anyway) go to pimps and bribes for corrupt policemen. This said, the plot turns on the introduction of an honest cop (Jack Lemmon, reuniting with MacLaine and Wilder-Diamond after their all-timer The Apartment from 1960). Or at least he starts out as one until he unknowingly and almost immediately arrests his superior for easing his work day in the neighborhood’s professional love-nest hotel and gets bounced from the force — launching him on his own career in pimp-dom.

Though Lemmon and MacLaine are about as French as Ezio Pinza, they emit the kind of casting goodwill for which Wilder was famous — that is, likable actors plunked into a seamy milieu so that audiences can more easily identify with the characters. MacLaine got a deserved Oscar nomination in an Irma role once mentioned for Marilyn Monroe, whose 1962 death just by itself made the idea of her casting a non-starter. But even though Lemmon ends up having to don Brit disguise in a plot turn that eventually grinds down the pace, he’s pretty close to his best here and surprisingly deft with physical comedy. A further delight is Lou Jacobi as proprietor of the saloon across the street from the hotel of sin — a role originally intended for Charles Laughton, who’d gone so far as to grow the character’s mustache before his own 1962 death. Given Laughton’s brilliance (or brilliant ham) in Wilder’s movie of Witness for the Prosecution, one’s what-might-have-been imagination goes to town.

There are several popups from Wilder’s ’60s stock company to pepper the action: Joan Shawlee, Cliff Osmond, Howard McNear and Hope Holiday, just to rattle off a few names from the top of my head. McBride’s voiceover devotes a lot of time to tracing Wilder’s career trajectory during this period (and beyond) when audiences once receptive to his liberation of rigid American screens eventually came to regard him as being old-fashioned. After helping promote Irma with a tie-in Playboy Interview in ’63 where he (affectionately) termed the now classic onetime flop Ace in the Hole “the runt of my litter,” Wilder suffered a more serious blow with his next picture from which his career never recovered.

It was the critical/commercial bludgeoning of Kiss Me, Stupid — a corrosive satire on blind careerism and small-town sexual hypocrisy that now has a monster cult (then reviewer Joan Didion “got it” even at the time) and which McBride notes here that he “adores.” KMS is much superior to both Irma and the comedy that followed (The Fortune Cookie), ranking with the editorially butchered The Private Life of Sherlock Holmes and then Avanti! as significant Wilder achievements. But neither critics nor the public bit — or at least the American contingent didn’t — though matters fared better in Europe, where screen taste is less myopic and more historically informed.

None of this is to suggest that Irma doesn’t have a slew of seductive features and moments — a much better career choice for Lemmon at the time than, say, a stage-bound leer like Under the Yum Yum Tree, which came out later the same year. Along with Sherlock Holmes and (though no one would ever think of it) The Emperor Waltz, it’s a contender for the best-looking movie Wilder ever made, and the first 75 minutes are pretty close to a consistent breeze, with the design, costumes, cinematography and scoring in flawless sync. This is a major production that really needed 4K scanning — and gets it, to very most visual results. The sound, though, is tinny, which is a rude surprise, given Previn’s achievement.