Discovery Channel’s new Discovery+ streaming service, which launched Jan. 4 in the United States, is filling a strong niche, according to Interpret research.

Available for $5 per month with a commercial-free version at $7 per month, the platform not only offers shows from Discovery Channel, with more than 55,000 episodes at launch, but also content from Discovery-owned HGTV, TLC, Food Network, Animal Planet, OWN and more. Discovery also has partnerships with BBC, A&E, Group Nine and others to provide additional content.

“Discovery’s portfolio of channels offers an array of science, reality and non-fiction programming, providing it with a unique niche of content that is differentiated from Disney+, HBO Max, Peacock or other broadcast and cable TV network-oriented streaming services,” according to Interpret.

Interpret’s New Media Measure found that this type of content is popular, with viewership of Discovery’s portfolio of channels ranging from 7% to 20% of pay-TV subscribers.

“Discovery is betting that those same people will happily pay $5 per month, particularly if they leave traditional pay-TV,” according to Interpret. 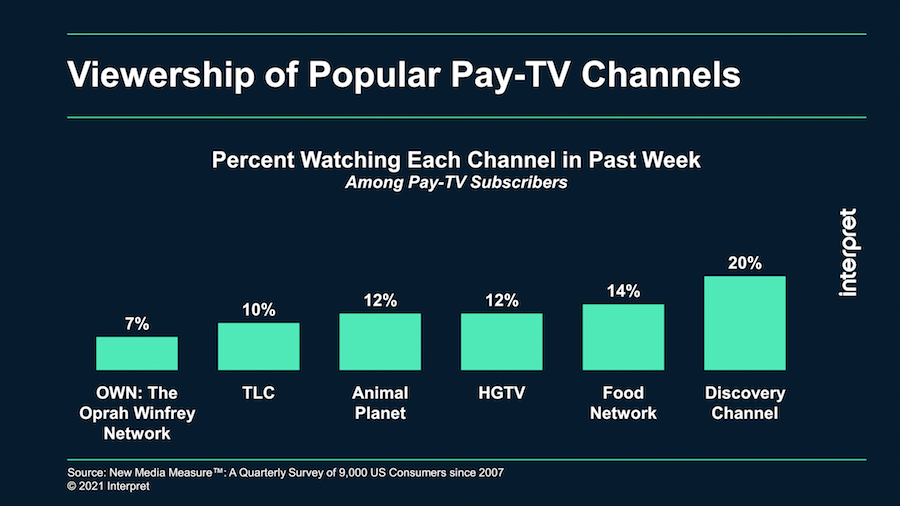 Discovery+ is already available in the United Kingdom and Ireland and intends to roll out to 25 international markets this year. A promotion from Verizon provides as much as one year free of Discovery+ to its wireless customers.