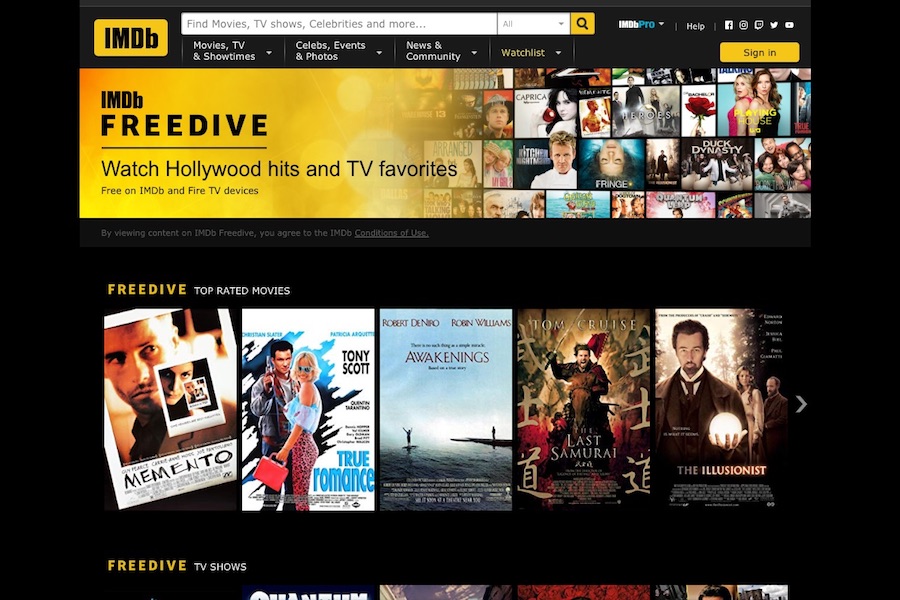 The channel is available in the United States on the IMDb website (www.imdb.com/freedive) via laptop, personal computer and on all Amazon Fire TV devices, according to the company, which is a subsidiary of Amazon.com.

IMDb Freedive enables customers to watch TV shows, including “Fringe,” “Heroes,” “The Bachelor” and “Without a Trace,” as well as movies, such as Awakenings, Foxcatcher, Memento, Monster, Run Lola Run, The Illusionist, The Last Samurai and True Romance, without purchasing a subscription, the company announced.

In launching the site, IMDb is expanding its video offering beyond short-form original series, trailers and celebrity interviews. Customers also can use “X-Ray,”  powered by the information on IMDb, to get information about cast, crew, trivia, soundtracks and more.

IMDb original video series, including “The IMDb Show,” “Casting Calls” and “No Small Parts,” are also available to stream on IMDb Freedive.

“Customers already rely on IMDb to discover movies and TV shows and decide what to watch,” said Col Needham, founder and CEO of IMDb, in a statement. “With the launch of IMDb Freedive, they can now also watch full-length movies and TV shows on IMDb and all Amazon Fire TV devices for free. We will continue to enhance IMDb Freedive based on customer feedback and will soon make it available more widely, including on IMDb’s leading mobile apps.”

Fire TV customers will see the IMDb Freedive icon in the “Your Apps & Channels” row. On Fire TV, consumers can say “Alexa, go to Freedive,” to access the site.

The IMDb Freedive catalog will continue to evolve, with new titles added regularly, according to the company.