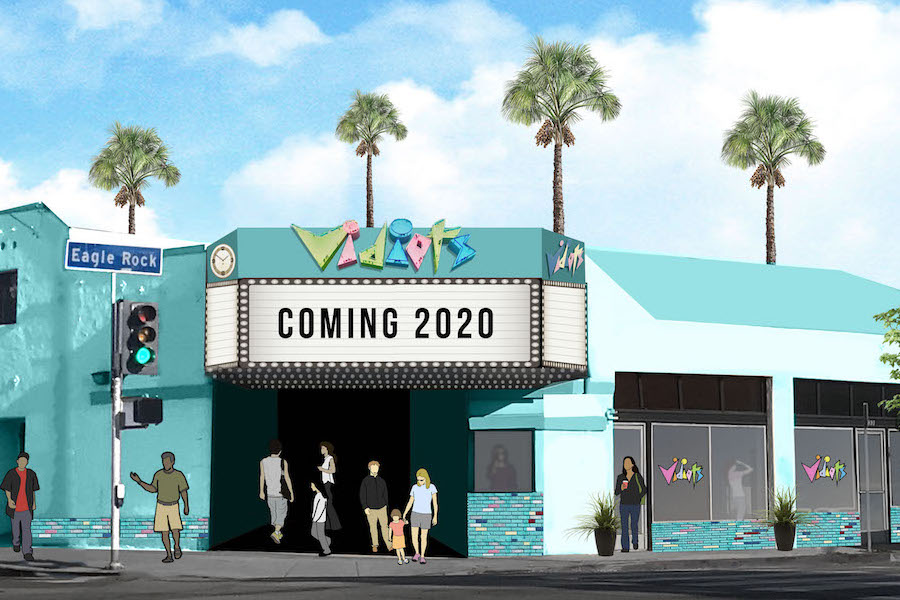 A mockup of the new Vidiots, opening this fall.

Vidiots, the iconic L.A. video store-turned-film nonprofit, will relaunch in fall of 2020 as an expanded entertainment, social and community space with an adjacent video store in a new home at the historic Eagle Theatre in Los Angeles, according to the Vidiots Foundation.

Restoring the 90-year-old, 200-seat Eagle Theatre as an independent theater with state-of-the-art sound and projection (35mm and DCP), Vidiots will offer a program of repertory titles, new independents, hard-to-find gems, classics and community-driven programs. An adjacent storefront will house Vidiots’ 50,000-plus DVD, Blu-ray and rare VHS collection for rental. The location will also have a multi-purpose, second screening room for film programs, educational workshops, and special events.

“Vidiots relaunching on the cusp of our 35th birthday is a triumph for Los Angeles film history and cements the legacy of Vidiots founders Patty Polinger and Cathy Tauber as innovators in L.A. film culture,” said Vidiots executive director Maggie Mackay in a statement. “Bringing the Eagle Theatre back and providing L.A. with a long-needed new film space is thrilling. We’re deeply grateful for our valued programming partners present and future, our expert advisors, and especially our First-In Founding Members whose generosity and passionate belief in our mission have made this relaunch possible. Vidiots at the Eagle is a community space created by and for film lovers and filmmakers. We welcome and encourage everyone who believes in our mission to join us as we work towards opening in fall 2020.”

“Los Angeles should have more movie theaters, not fewer, and Vidiots has come to give all us punch drunk film lovers another place to call home where we can roam the racks. Thank you! So grateful to be a small part of this evolving institution,” said Reitman in a statement.

“We’re thrilled that Vidiots is moving into this next chapter and that our unique library of films will once again be made available to the public, especially in this era of streaming where choices are increasingly limited,” said Vidiots founders Polinger and Tauber in a statement. “Vidiots at the Eagle Theatre is a truly exciting and ambitious plan that revolves around our commitment to archival preservation, education, and accessibility, while maintaining and growing our passionate community of film lovers.”

“When we first moved in together and merged our belongings, we became a two-VCR family — and this was in 2013,” said Longworth and Johnson in a statement. “VHS and video stores were integral to both of us becoming who we are, and we couldn’t be happier to support the evolution of Vidiots and its media library. In a world remade by streaming, it’s never been more important to preserve access to physical media for all.”

“Their efforts towards creating community and preservation made Vidiots legendary in L.A. and I’m so excited to see their philosophy and energy reincarnated in a brick-and-mortar film space on the East Side. I can’t wait to spend all my time there,” said Davis in a statement.

Recently, Vidiots launched a programming partnership with Alamo Drafthouse L.A. with the series “Tales From the Video Store.” Vidiots is currently presenting a monthly 16mm series with Projections at the Bootleg Theater. New programming partnerships with The Black List, The Bob Baker Marionette Theater, and Cinema Eye Honors will launch in late in 2019/early 2020.

Vidiots was opened as an alternative video store in 1985 by L.A. natives Polinger and Tauber. For 32 years Vidiots served its community via the iconic Santa Monica storefront, which shuttered in 2017 in the wake of rising costs. With the support of Megan Ellison’s Annapurna Pictures (which became a major donor in 2015, along with Vidiots customer Dr. Leonard Lipman), Vidiots was able to store its collection and devise an extensive plan for sustainable relaunch in a new home.

Vidiots’ new home, originally conceived as a vaudeville stage, first opened in May 1929 as The Yosemite Theatre. After a few short days, the Yosemite re-opened as an independent silent movie theater, and a year later it transitioned to sound. In 1940, The Yosemite became The Eagle Theatre. From 1976 to 1979, the theater ran as a Pussycat, part of the adult cinema chain. In 1983, The Eagle once again became a traditional independent cinema, and operated into the 1990s before becoming a series of churches.

With almost-10,000 square feet of entertainment and educational space, Vidiots will operate seven days a week and offer daily screenings and special programs, the full video store with DVD and Blu-ray rentals, concessions, and a light menu with beer and wine. The main theater (200+ seats, a stage, 35mm, DCP, and state-of-the-art sound) will host screenings and tastemaker events. A second, smaller screening and event space (approximately 50 seats with DCP projection) will host screenings, workshops, and receptions.

To make a donation and sign up for email updates, visit vidiotsfoundation.org.