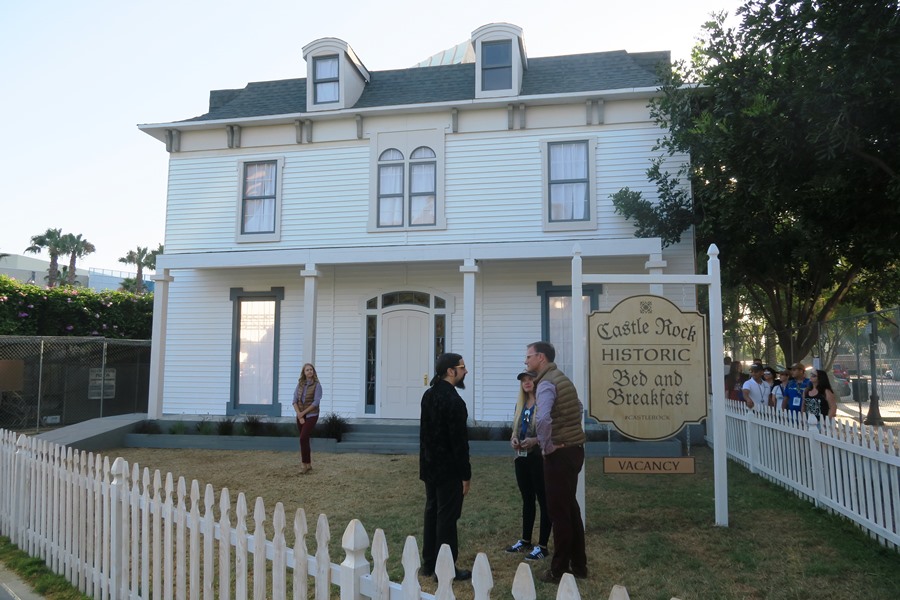 A scene from the fictional town of Castle Rock.

Hulu, the No. 3 subscription streaming service, had an increased presence at San Diego Comic-Con this year, taking over city parkland across the street from the Convention Center to promote “Castle Rock,” a new digital original series based on the horror stories of Stephen King.

Castle Rock, of course, is the fictional town in Maine where some of King’s most notorious stories were set, including Cujo, Needful Things, The Dead Zone and The Dark Half.

And to promote the new J.J. Abrams-produced series, which will debut on July 25, Hulu set up an installation on city parkland across Harbor Drive from the San Diego Convention Center.

There was a car nose-first in a lake on the southwest corner of Children’s Park.

A short distance away, at the corner of Front Street and Island Avenue, was a Victorian building with a sign out front that identified it as the “Castle Rock Historic Bed and Breakfast.”

Milling about the front yard were a creepy couple, identically dressed, the woman sweeping a broom and the man greeting guests (convention attendees who waited in a long line to get in).

Walking through the building was like visiting an elaborate haunted house attraction for Halloween. The tour began as guests were ushered into the lobby, with a somber-looking desk clerk and an old manual typewriter with a single sheet of paper loaded into it, with the sentence “All work and no play makes Jack a dull boy” written repeatedly (straight out of the King classic The Shining).

The tour then turned into a mash-up of horror scenes: a bathtub filled with body parts, a prison death chamber, a room filled with bald, nude mannequins; another room in which guests felt as though they were underwater, looking up at a sunken car.

And throughout the tour, actors kept jumping out of the dark, yelling things like “Get out, now!” and “Help me.”

The disparate scenes are supposed to make sense once viewers watch the show.

Hulu also screened the first episode of the show just before a panel featuring the cast, which includes Sissy Spacek, the star of one of the most celebrated Stephen King movies, 1976’s Carrie, and Bill Skarsgard, who played Pennywise the clown in the theatrical It.

The episode finds Henry Deaver (Andre Holland), a death row attorney with a twisted history in Castle Rock, returning to his home town.  The impetus for his return: a stranger (Skarsgard) is found in a cage beneath Shawshank prison, and all he will say to corrections officers is Deaver’s name.

Spacek said she likes King because “he combines horror with humor.”

“So that was an interesting challenge, figuring out how to balance the demands of two different types of stories. So we tried to chart a course that in some ways is driven by mysteries … and then also to answer some questions perhaps earlier than the audience expects.”