Online TV sources — including subscription video-on-demand services such as Netflix, free services such as Pluto TV, and Virtual MVPDs such as YouTube TV — are now the TV “home base” for half of all U.S. TV consumers, according to Hub’s annual “Decoding the Default” study.

The study since 2015 has tracked the TV source that consumers consider their TV “home base” — the source they turn on first when they’re ready to watch.

“We’ve seen a significant boost in streaming TV service subscriptions since the start of the pandemic in March of this year,” Peter Fondulas, principal at Hub and co-author of the study, said in a statement. “But perhaps more significant than the simple increase in online subscriptions is the profound shift in consumers’ viewing behaviors generally. Instead of reaching first for the cable remote when it comes time to watch TV, more and more consumers are defining TV viewing, first and foremost, as viewing on streaming services. Whether that shift persists once the pandemic crisis has passed is, of course, the billion-dollar question.”

According to the study, 50% of respondents say an online service is the first source they turn on, up from 47% last year. Meanwhile, 42% say their first choice is viewing from the traditional TV set-top box (live viewing, DVR or VOD), down from 47%. (The remaining percentages each year default to viewing over-the-air, from an antenna.) 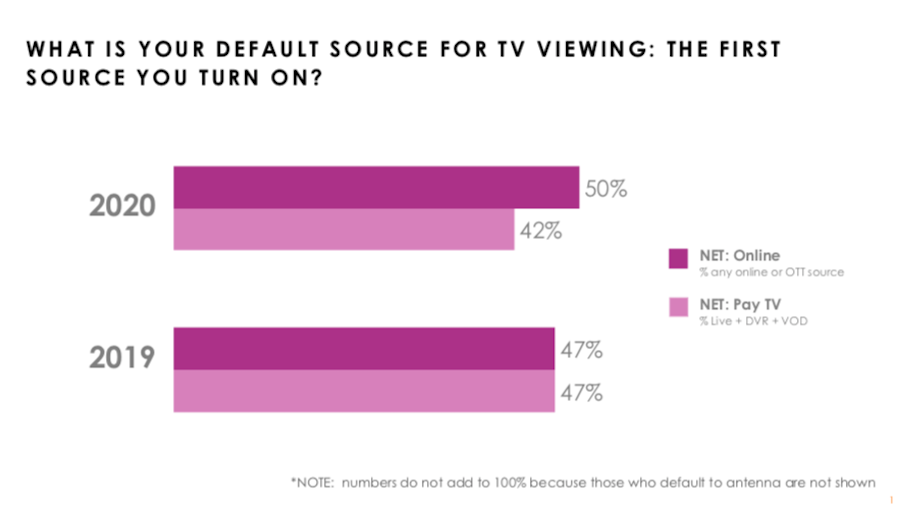 For those who default to an online source, nearly half (23% of the 50%) say that online source is Netflix. In fact, Netflix, by itself, is now nearly as likely to be consumers’ TV home base as all live TV channels accessed through pay TV combined. In 2016, live TV from a pay TV service was three times as likely as Netflix to be viewers’ TV default. Netflix trails live viewing by only 7 percentage points. 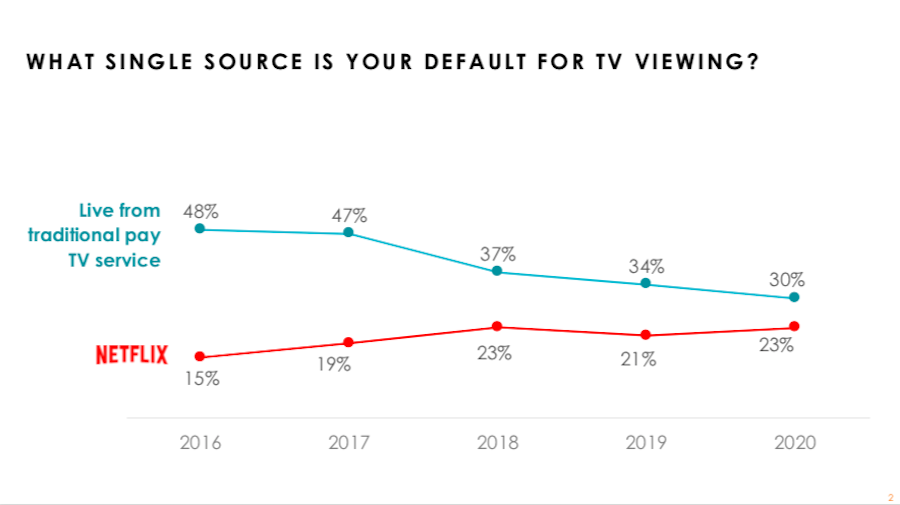 Fewer than one in five young consumers default to live TV, down 7 percentage points from last year. But more ominously, even among live TV’s strongest adherents — those age 55 or older — the proportion defaulting to live has dropped significantly since just last year. Only 14% of 18-34 year olds turn to live TV before any other source, vs. 21% in 2019. The study found an equal 7-point drop among 55-plus year olds; fewer than half now say live TV is their viewing home base. 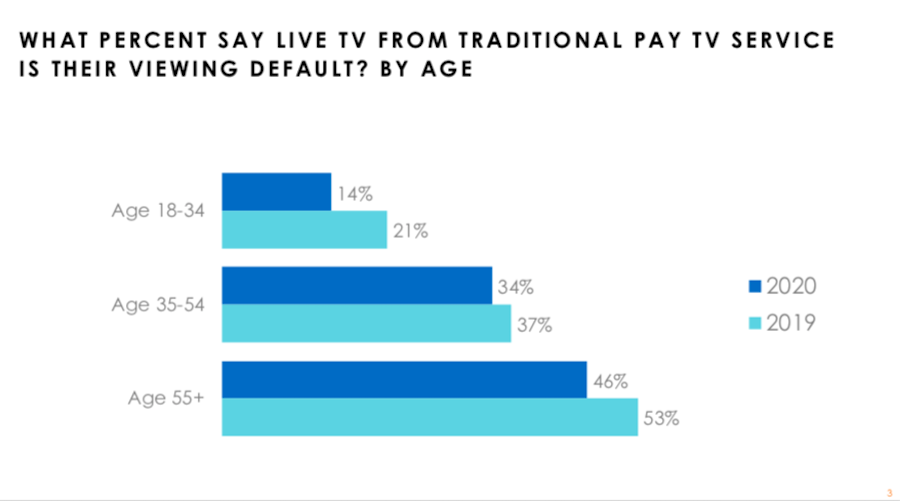 The choice of default is driven primarily by two factors — content and ease of show discovery — according to the study. The top reason for making a source one’s default is because it offers access to one’s favorite shows. But a more general content consideration is a top driver as well: wide variety of shows and movies to choose from. Interface simplicity is also a top driver of default, in particular because the service makes it easy to find something to watch. 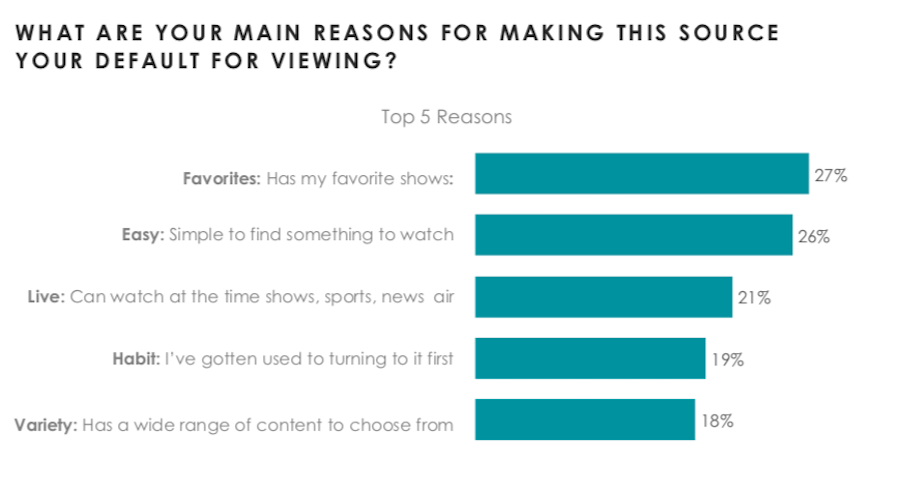 When consumers decide it’s time to cut back on TV services, they’re much more likely to remain loyal to their TV service default, Hub reports. Hub asked consumers which one TV service they’d keep if they had to drop all others. Among users of each, pay TV service and Netflix were the two most likely to make the cut. 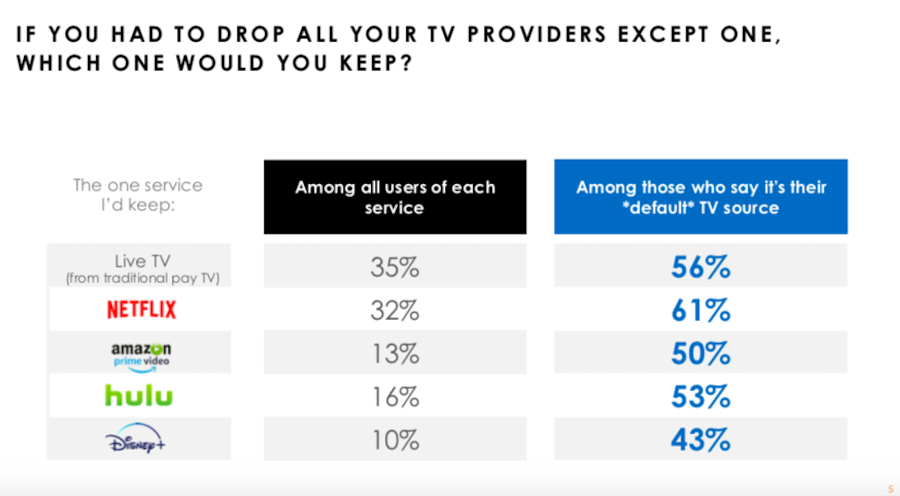 Hub’s “Decoding the Default” study was conducted among 1,600 U.S. consumers with broadband, age 16-74, who watch at least one hour of TV per week. The data was collected in August 2020.