Use of internet-connected televisions continues to rise. New data from Hub Entertainment Research found that 62% of homes with a television use a smart-TV. That compares with less than half (47%) of homes with a smart-TV two years ago. This surge is driven by increases in both smart-TV homes and in the share of those homes using smart-TVs to stream.

Hub’s fourth annual “Evolution of the TV Set” study shows how the biggest screen in the home is evolving, affecting not just viewer habits and expectations but the business plans of content providers and advertisers. Streaming, voice control, and non-viewing uses of TV sets show how sets — and viewers — are evolving.

The most popular non-TV activities on smart-TVs are streaming music, mirroring or casting another screen to the set, checking news or weather apps, or using an on-set browser. 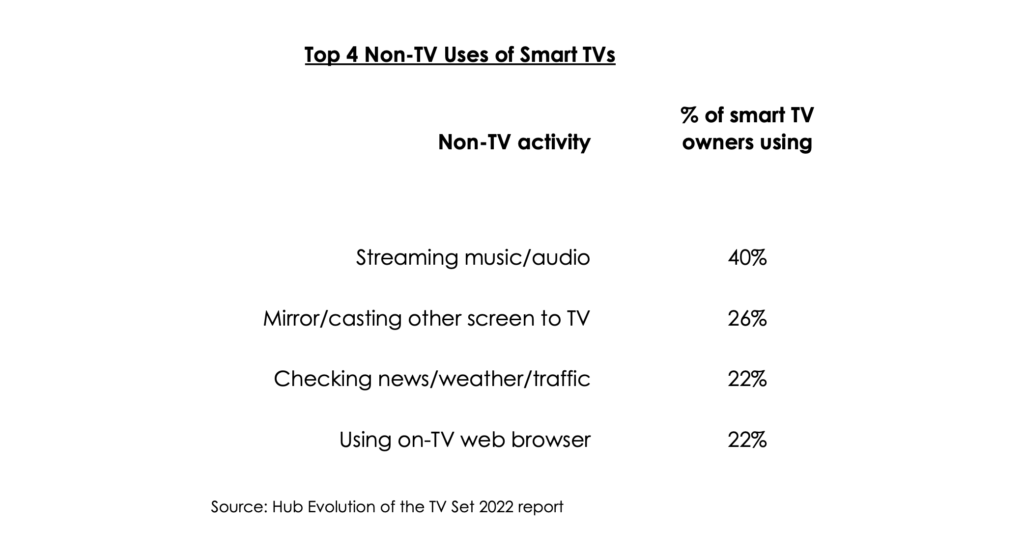 “Streaming on smart-TV sets has grabbed the spotlight, but don’t forget other ways TVs have evolved,” David Tice, senior consultant to Hub and co-author of the study, said in a statement. “With the TV itself becoming an advertising platform, changes in user behaviors from set evolution can impact marketing opportunities, exposure and effectiveness.”