Viewers in the U.S. increased their consumption of live TV content in 2022, while streaming video remained unchanged from 2021, according to market data from Hub Entertainment Research.

The survey was conducted in October among 1,602 U.S. consumers with broadband, age 16-74, who watch at least 1 hour of TV per week.

“The steady, year-by-year increase we’ve seen since 2016 for online sources as the home base for favorite shows has plateaued in 2022,” read the report. “On the flip side, the proportion watching their new favorite from an MVPD set-top box has increased.”

At the same time, perennial streaming behemoth Netflix’s status as the go-to source for online content continues to decline. The percentage of respondents who sourced Netflix for new content dropped to 29% this year from 35% in 2021, and 38% in 2020 during the height of the pandemic. Live TV content preference increased to 21% from 15% in 2021. Hub found that when excluding Netflix, viewership of Prime Video, Hulu, Disney+ and HBO Max increased 4% collectively to 25%.

Driving pay-TV viewership is the fact that four of the Top 10 shows cited by respondents are available on pay-TV, including “Yellowstone,” “House of the Dragon,” “Ghosts,” and “NCIS”.

“Content is king. Cliché or not, it’s clear from these results that viewers will happily go to whatever platform has exclusive rights to the most popular TV shows and movies du jour,” Peter Fondulas, principal at Hub and co-author of the report, said in a statement. “Over the past few years, those shows have been increasingly offered by streaming services. But as franchises like ‘Yellowstone’ and ‘Game of Thrones’ demonstrate, streaming does not have a necessary monopoly on buzz-worthy content.” 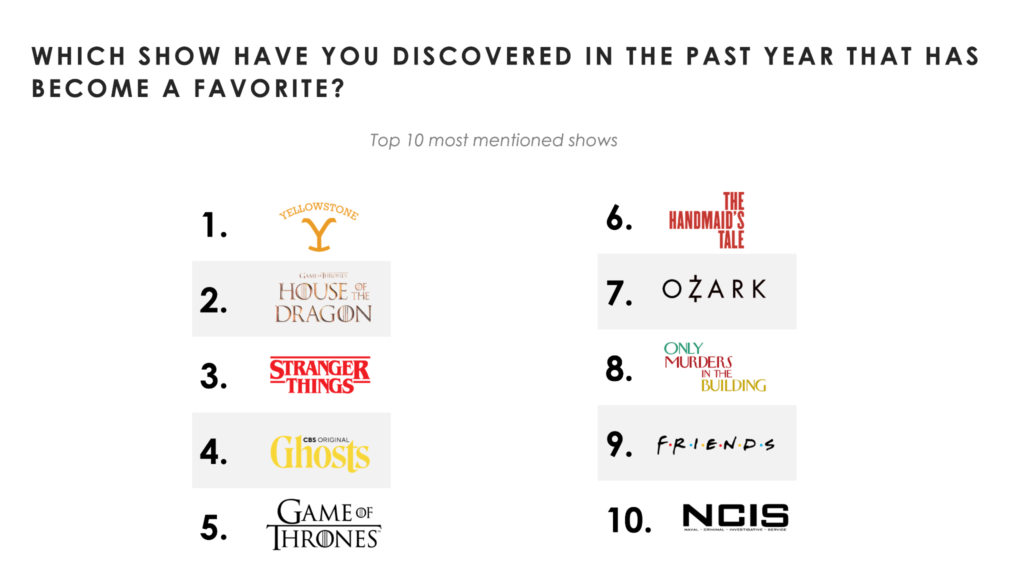