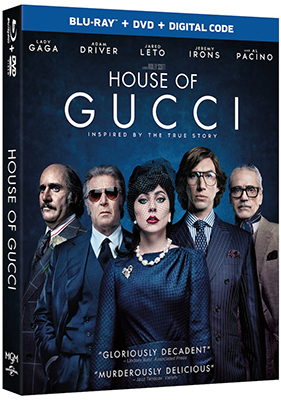 Based on the true story of the rise of the Gucci fashion empire and the fall of the family behind it, House of Gucci is presented by director Ridley Scott as a bit of a Shakespearean crime drama with a touch of farce.

Lady Gaga gives a commanding performance as Patrizia, who essentially seduces and marries Adam Driver’s Maurizio Gucci in the 1970s. Marizio is one of several heirs to the growing Gucci fashion house. Encouraged by Patrizia to maneuver to take control of the family business, Marizio finds himself alienating his uncle (Al Pacino) and buffoonish cousin (Jared Leto). Much to her chagrin, however, Marizio tires of her antics, and rather than risk losing her stake in the company to divorce, she decides to hire a hitman to kill him.

The Blu-ray includes three short but solid featurettes about the making of the film. The 10-minute “The Rise of the House of Gucci” is a standard making-of featurette in which the various filmmakers and cast involved discuss how much they enjoyed the material and working with each other. The five-and-a-half-minute “The Lady of the House” examines Lady Gaga’s performance, while the five-and-a-half-minute “Styling House of Gucci” looks at the film’s elaborate costumes and production design.