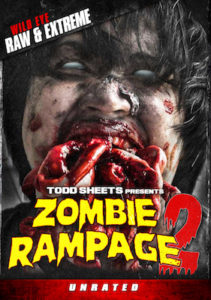 This is the long-awaited followup to Todd Sheets’ 1989 shot-on-video, direct-to-video splatterfest Zombie Rampage. Using newly unearthed footage from his aborted sequel to the VHS hit, Sheets has overseen the completion of the gore-soaked second installment in his zombie filmography that was thought lost forever.

In the film, two warring factions live side by side during the Zombie Rampage apocalypse.