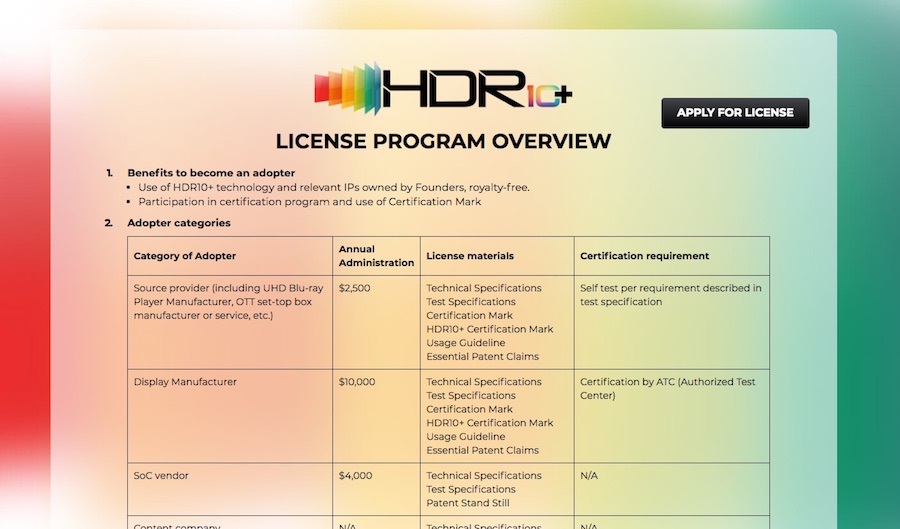 Panasonic and Samsung are also among the first to announce firmware has been deployed to select 2018 television models enabling support of HDR10+ for consumers.

HDR10+ advances High Dynamic Range (HDR) and HDR10 TV formats by adding dynamic metadata to each frame. It enables advanced chipsets to create a true-to-life picture across a wider range of displays.

The HDR10+ license program and logo ensure that HDR10+ compliant products meet high standards for picture quality and that the true intent of filmmakers is preserved within these key parameters:

Depending on the category of adopter, certification can be obtained by self-certification or through an Authorized Testing Center (ATC) such as Allion and TTA — the first centers verified for HDR10+ certification. Adopter categories include UHD Blu-ray player manufacturers, OTT set-top box manufacturers or services, display manufacturers, SoC vendors, content companies and tool vendors.

More than 80 companies have already applied or completed the license program.

“A standardized licensing process has allowed partners, including content creators, television and device manufacturers, to easily incorporate HDR10+ technology,” said Danny Kaye, EVP of 20th Century Fox and managing director of the Fox Innovation Lab, in a statement. “We’re encouraged by the interest of early adopters and an expanded HDR10+ ecosystem that will improve the viewing experiences for all audiences.”

“Panasonic is happy to announce that through the deployment of a firmware update, the majority of our 2018 4K models are now HDR10+ certified meaning that our viewers will be able to enjoy content even closer to the intentions of the filmmakers,” said Toshiharu Tsutsui, director of Panasonic’s TV Business Division, in a statement.

“We are thrilled that the majority of our 2018 lineup will be fully certified for HDR10+,” said Bill Mandel, VP of Industry Relations at Samsung Research America, in a statement. “We are collaborating with other HDR10+ adopters globally who are making tools, developing their own SoCs and/or TV line-ups to be HDR10+ compliant to provide consumers broad access to a great HDR experience.”

“We are so excited to be a part of this promising new technology standard that is HDR10+,” said Denver Mishima, head of Standards & Compliance Division of Allion Japan Inc, in a statement. “As a third-party Authorized Test Center, Allion always strives to provide value proposition to prestigious organizations such as HDR10+ Technologies and its adopters. Providing adopters a better testing and certification experience is our mission and commitment in this venture.”

“TTA is pleased again to be working with the display and media industries to launch the newest HDR technology with HDR10+ LLC adopters,” said Park Yongbum, VP of TTA. “We are looking forward to providing testing and certification services for this latest logo program.”

More on the certification requirements and application process can be found here.

Companies can learn more about the HDR10+ license and logo program, including final specifications and adopter agreements here.