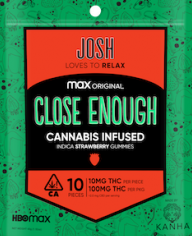 “Close Enough” is an animated comedy about a married couple, their 5-year-old daughter, and their two divorced best friends/roommates all living together on the east side of Los Angeles. They’re navigating that transitional time in your 30s when life is about growing up, but not growing old. It’s about juggling work, kids, and pursuing your dreams, while avoiding time-traveling snails, stripper clowns, and murderous mannequins. Their life may not be ideal but for now, it’s close enough.

“When crafting any campaign, our aim is always to create an experience for the audience that feels genuine and exciting,” Peter Sherman, SVP of program marketing at HBO Max, said in a statement.

“[Our] partnership with HBO Max is an exciting opportunity to showcase our delicious gummies to a brand new audience,” said Cameron Clarke, CEO of Sunderstorm, the parent company of Kanha.

Through the end of July, while supplies last, “Close Enough” Cannabis-Infused Gummies are available at select, licensed retailers in California. They will also be available for purchase and delivery via Eaze in Los Angeles, San Francisco, and San Diego.