Upstart SVOD service HBO Max is partnering with sister company DC Comics for three new original digital comic book series promotions titled “To the Max.” The series features animated stories about ordinary people achieving their maximum potential when they transform into extraordinary superheroes with the help of another new character, Max the dog.

The free comics launched June 15, cross-promote the recent launch of Max and are full of Easter Eggs and nods to much of the 10,000 hours of content currently available on the streaming platform, including “Friends,” “Game of Thrones,” “The Big Bang Theory,” “Sex and the City” and “Scooby-Doo,” among others.

The initial launch of the digital comic includes three eight-page chapters featuring “Hector,” “Brian” and “Olivia” (HBO), who meet Max the dog, gain access to different superpowers and become able to teleport, shape shift, fly and save lives around the world. 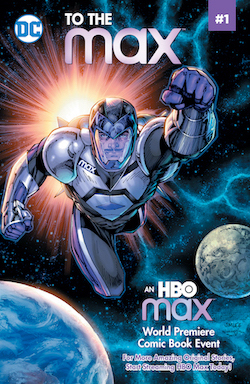 “These fun, original stories depict a diverse range of ordinary individuals who are symbolic of the depth and breadth of programming that is available on the platform, driving home the message that HBO Max has something for everyone,” Robert Greenblatt, chairman, Warner Media Entertainment and Direct-To-Consumer, said in a statement.

To the Max: Hector features a schoolteacher finding a mysterious device that sends him flying into an incredible outer-space rescue mission. The issue is written by Ivan Cohen, with cover art by Jim Lee and pencils by Scot Eaton.

To the Max: Brian is about a scuba instructor who is transformed into a superhero who must save innocent people from a deadly storm in Singapore. The issue is written by Ivan Cohen, with cover art by Jorge Jimenez and pencils by Hendry Prasetya.

To the Max: Olivia presents a down-on-her-luck stand-up comic who is all that stands between her audience and gun-toting criminals who plan to rob a Las Vegas casino. The issue is written by Ivan Cohen, with cover art by Amanda Conner and pencils by Laura Braga.