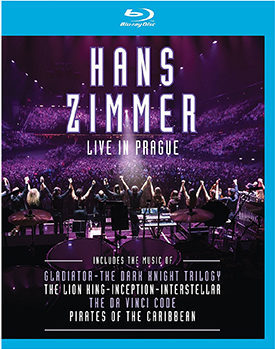 Concerts of film music conjure visions of orchestras performing a variety of pieces not unlike classical music. Indeed, the maestro John Williams often fills the Hollywood Bowl with performances of his classic movie themes.

A Hans Zimmer concert, on the other hand, is an entirely different experience. Zimmer’s touring show offers an eclectic blend of symphony and rock concert, befitting a composer whose sensibilities often eschew the traditional in favor of experimental sounds that often define his scores.

The concert featured on this Blu-ray, recorded May 7, 2016 in Prague during Zimmer’s European tour last year, offers a set list that is pretty typical for his live shows the past few years.

Zimmer offers a fair mix of his greatest hits, from a medley from his Oscar-winning The Lion King score, to selections from his collaborations with Christopher Nolan, including The Dark Knight, Interstellar and Inception.

He also offers his Superman theme from Man of Steel, though this performance predates when he started including his Wonder Woman theme alongside it, as he did during his 2017 American performances.

Many of his pieces are designed to showcase the talents of particular vocalists or musicians, with pieces such as a Gladiator medley providing an emotional respite in the build-up to a rocking the stage with an all-out performance of upbeat music from the “Pirates of the Caribbean” films.

Of course, just as he is often criticized for in his film scores, Zimmer wouldn’t be Zimmer without taking his personal indulgences a bit too far in some cases. Here, it’s the bizarre decision to present his atonal Electro theme from The Amazing Spider-Man 2, which was designed to emulate a cacophony of madness in the film, and certainly plays like it on stage. While Zimmer has earned his fair share of fans who admire his willingness to push the boundaries of his art, and a number of whom no doubt enjoy this track for its eccentricities, this is a piece that simply doesn’t hold its own against the majesty of his “Da Vinci Code” music or the whimsy of a Driving Miss Daisy.

Still, this is a concert that provides a great showcase for Zimmer’s talents as a musician and is highly recommended to anyone who appreciates the modern age of film scoring.