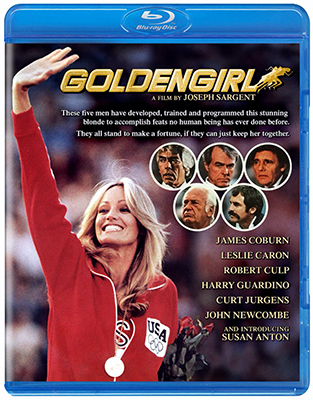 Goldengirl skipped my radar the week it opened in 1979. If one were to judge a film by its hype, my verdict on the Goldengirl one-sheet was guilty of promising a standard issue Olympian biopic, something along the lines of NBC’s The Wilma Rudolph Story, this time told in toothsome whiteface. A group of seasoned veterans — James Coburn, Curt Jürgens, Robert Culp, Harry Guardino, Michael Lerner, Leslie Caron, and tennis great John Newcombe giving it his near mute best — bolstering Miss America runner-up Susan Anton’s big screen bow held zero appeal. My introduction to Miss Anton would have to wait for her inevitable appearance on a Bob Hope special.

But wait. Preliminary research unearthed this banger synopsis on IMDb: “A neo-Nazi doctor tries to make a superwoman of his daughter who has been specially fed, exercised and conditioned since she was a child in preparation of the Olympics.” Nazis? Olympics? Holy Leni Riefenstahl! Why didn’t somebody tell me there were goose-stepping fascists afoot? Nazis make the best enemies. I’d have been first in line on opening day.

Other than Goldine Serafin (Ms. Anton) clothed in a red warmup suit and the cut-out heads of the five male co-stars (arranged in the shape of the Olympic rings) who form her on-screen consortium of investors, the poster failed to mention a word about the step-daughter of a Nazi who’s been eugenically generated 30 to 40 years ahead of time, to transform an uncanny flair for running in circles into a multi-million-dollar marketing goldmine. Why wasn’t the Nazi angle played up? Goldengirl wasn’t intended as a mere theatrical release. It was a trick-deal with pixels in the mix! According to the Blu-ray’s special features interview with Susan Anton, AVCO Embassy Pictures was in cahoots with NBC. The finished product would run a little over three hours. A shortened version would play theatrically at a truncated running time of 104 minutes with the long version spread out over two nights as a four-hour miniseries. Some things aren’t meant to be.

It’s hard to believe that the long version wouldn’t have shed more light on the Nazi backstory. In its edited form, what should have been a main plot-motivator is but a throwaway mention. Other than that, the only thing even remotely interesting about this statuesque blonde wearing running suits that are so tight they appear to have been spray-painted on is her Aryan ancestry. By all accounts, the 184-minute cut is lost to the ages. The manner in which Howard S. Berger and Nathaniel Thompson’s wackily affectionate audio commentary gets off on the mere thought of unearthing the uncut version you’d think they were on the trail of the missing reels of Greed.

What follows details Goldine’s training for and subsequent winning of (SPOILER ALERT) the three medals. Coburn’s smile outperformed all, and Culp actually gets around to doing some acting. Jürgens had played this type of character so often, he could have done it in his sleep. This would be his farewell performance. Director Joseph Sargent had at least one unqualified masterwork to his credit. The Taking of Pelham One Two Three is a veritable textbook on how to hijack a New York subway car c.1974 with a curtain line you’ll never forget. Coburn and Culp were pretty much capable of directing themselves. Guardino comes off worst, his performance calling for little more than talking with his mouth full and sexist slobbering. Anton’s beauty is eternal and under-cranking the camera just a little bit gave her runner the illusion of speed. It’s when the test tube athlete took her frustration out on a television tube that the unintentional howls reached their zenith.

The bonus features also boast a lengthy career overview by composer Bill Conti and a few minutes with character actor Nicholas Coster. You may not be familiar with the latter’s name, but you’ll recognize him the instant you see him. Listening to Coster go on about his job, you’d think he was the luckiest guy on the planet. So infectious is he, the segment will end leaving you with a permanent grin that’ll be tough to shake.