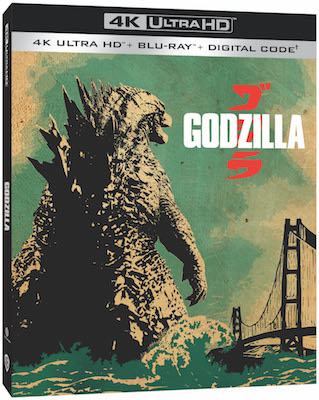 Warner Bros. Pictures’ and Legendary Pictures’ Godzilla (2014) marked a big-screen reboot of the King of the Monsters and the start of Legendary’s MonsterVerse, which would come to include Kong: Skull Island (2017), Godzilla: King of the Monsters (2019) and the upcoming Godzilla vs. Kong, hitting theaters and HBO Max March 31. The 4K release of Godzilla is nicely timed to prepare for the latest installment in the series.

Directed by Gareth Edwards (Rogue One: A Star Wars Story), the film is based on the character Godzilla, owned and created by Toho Co. The adventure reimagines the lizard-like giant in contemporary times and is set 15 years after a nuclear meltdown in Japan which was caused by giant MUTOs (Massive Unidentified Terrestrial Organisms). Years later, as two MUTOs terrorize the countryside in order to reproduce, they awaken the ancient alpha predator, known as Godzilla, whose existence has been kept secret by the U.S. government since 1954.

Godzilla starts with a strong dramatic sequence featuring Bryan Cranston and Juliette Binoche at the nuclear plant 15 years previous; then it flashes forward to follow their son (Aaron Taylor-Johnson), a U.S. Navy officer who has just returned home to his son and wife (Elizabeth Olsen, in a pairing of the two before the Marvel series). He reluctantly leaves them once again because his father, obsessed by what caused the nuclear disaster, has been detained in the plant’s quarantine zone. Eventually, both get caught up in the chaos caused by giant monsters that feed on radiation.

As do many first movies in a series, this film takes its time introducing the true star of the show, Godzilla, and the action slows a bit before he emerges. Still, he’s quite impressive when he does. The disc features a Dolby Atmos soundtrack, which is used to full effect when the bellowing, truly enormous Godzilla enters. In addition to the monster sequences, another impressive action scene features a HALO jump that is as beautiful as it is nerve-wracking. These scenes are the kind of visuals that are really shown to their best advantage in 4K.

There are no extras on the 4K disc, but the Blu-ray in the combo pack contains the previously released special features “MONARCH: Declassified,” offering new evidence not contained in the film that unravels the massive cover-up to keep Godzilla’s existence a secret, and “The Legendary Godzilla,” a behind the scenes look at the monsters in the film.