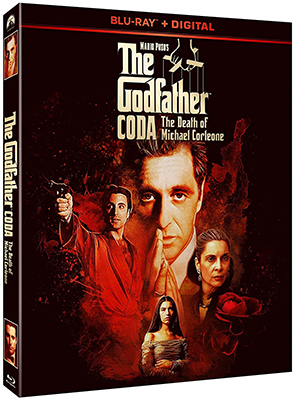 For his latest trick, director Francis Ford Coppola has taken on the challenge of re-editing the oft-maligned The Godfather Part III into something a bit more palatable for fans of the first two “Godfather” films.

The legendary filmmaker has been busy lately quite literally reimagining his career. Last year saw new edits of Apocalypse Now and Cotton Club hit Blu-ray (in the form of Apocalypse Now: Final Cut and Cotton Club Encore, respectively). Those efforts may have given him the nerve to revisit the concluding film of the “Godfather” saga for its 30th anniversary.

Coppola has trimmed the film by 13 minutes (from 170 minutes to a tighter 157), rearranged a few scenes to improve the main story’s pacing, and reworked the film’s opening and closing scenes. He also reverted the title to what he preferred it to be when he was making it with original “Godfather” novelist and screenwriter Mario Puzo. In calling it a Coda with the subtitle “The Death of Michael Corleone,” Coppola sees the film more along the lines of his original intentions — as an epilogue to the story of the original films.

In the third movie, set in 1979 and 1980, the aging Michael Corleone (Al Pacino) reflects on his decades in charge of one of America’s most notorious crime families, and continues to strive for the legitimacy he claimed to be pursuing in the first two films, which took place in the 1940s and 1950s. He embarks on a scheme to buy out a European conglomerate partly owned by the Vatican, but runs headlong into church corruption and rivals unwilling to give up the old ways.

The story quite cleverly plays into a few real-life events from the late 1970s and early 1980s, namely the death of Pope John Paul I after just a month after his ascendency, and a church banking scandal — though the script has to massage the actual timeline in order to fit the fictional Corleones into the proceedings.

Coppola’s new vision of the third “Godfather” comes complete with a sumptuous new digital restoration. The Blu-ray presentation of the new version comes devoid of extras save for a minute-and-a-half introduction from Coppola, who basically recounts his reasons for the new edit that were already quoted in Paramount’s press release announcing it.

In terms of the film’s new structure, however, some of the cosmetic changes and the shorter running time make the film a bit easier to handle as a standalone movie, but many of the problems that plagued the film upon its original release aren’t so easy to erase.

The first two “Godfather” films on their own tell an almost perfect circular narrative — the contrast in the rise of power between Vito Corleone and his son, Michael, 30 or so years apart. That they were made within two years of each other — 1972 and 1974 — only deepens the connection between the two films as broader, singular work.

It’s no coincidence, then, that supercuts of the first two films in chronological order were already being broadcast on TV by 1977.

Thus, when the third film, released 16 years after the second, by design focuses solely on Michael’s older years and his attempts to transition the family away from crime, it is only natural to compare it with the original, in which the older Vito also hinted at wanting to go legit after tiring of bloodshed. It is not a comparison that works favorably to Part III, despite its many positive traits.

That inevitable comparison may have been why Coppola was reluctant to make a third film to begin with, and when he finally agreed to do it (after reportedly encountering financial problems due to some of his films underperforming in the 1980s), his instincts told him to make it more of an epilogue to the saga rather than a continuation of it. It was the studio that saddled the film with the Part III moniker, and likely the pressure to make it an epic on the scale of the first two (both of which won Best Picture Oscars).

Interestingly, in recutting the film, Coppola discards the leisurely pacing of the original edit, and the entire ceremony of Michael being honored by the Vatican, by moving the scene of Vatican’s banking representative asking Michael for help to be the new opening scene. This new structure is similar enough to how the first film opens, with the mortician asking Don Vito for help, that the obvious intention is to further explore the parallels between the father and son crime lords. If there’s no way to rework the foundations of the film as a whole to get it to measure up, at least its ambitions as a character study give it weight.

It’s an interesting contrast. Vito’s eldest son, Sonny, is so eager to replace his father as a criminal mastermind that his shortsightedness gets him killed, putting Michael in line to take over the family business, a path Vito never intended. The only ambitions of Michael’s eldest son, Anthony, lead him to becoming an opera singer. With Michael’s daughter, Mary, the lynchpin of his attempts to legitimize, Michael has nowhere to turn but his nephew, Vincent, Sonny’s illegitimate son, to serve as the new Don.

Coppola’s new ending seems to tread on the subtitle as more of a symbolic notion of the main character’s death, rather than the literal one that seemed tacked onto the original theatrical cut.

The further examination of Michael and his ill-fated attempts to scrub his sins are still the film’s greatest asset, even if Pacino’s portrayal seems more akin to his prototypical ’90s persona than his earlier performances as the character. The film’s most-glaring weakness, however, remains the casting of Sofia Coppola in the key role of Mary. The part had originally been intended for Julia Roberts, who dropped out due to scheduling conflicts, and then Winona Ryder, who left just before production due to nervous exhaustion, leaving the director to cast his own daughter in the role.

On paper, Mary’s pivotal place in Michael’s final arc is clear: She’s the shining beacon who will salvage the family’s legacy, much in the same way Vito originally envisioned Michael, but those expectations are threatened when she literally flirts with the criminal underpinnings of the family business, in the form of her cousin, Vincent (Andy Garcia). A more talented performer would have imbued Mary with a life and vibrance that forces the audience to care about her in a way that elevates the film’s reliance on her character. As much as she evolved into a talented director and screenwriter in her own right, Sofia is just not an actress, and her flat performance serves mostly to distract from the strong inter-generational dynamics between Pacino and Garcia — a criticism leveled as much at the film in 1990 as it is today. Given Mary’s foundational position to the story’s emotional underpinnings, no amount of re-editing can minimize that impact.

However, at least Mary’s arc is there for viewers to interpret. A more fundamental problem for the film is the complete absence of Tom Hagen, Robert Duvall’s character from the first two films who was practically another son to Vito and served as the family’s lawyer. Duvall opted out of the project due to a pay dispute, so Hagen was said to have died offscreen and George Hamilton was brought in to play a new family lawyer in a perfunctory role. Without Duvall, the screenplay was forced to put more emphasis on Vincent and especially Mary.

There’s no telling how much an expanded role for Duvall, with Hagen at the heart of the Corleone moral quandaries, would have elevated the film’s potential to stand alongside its predecessors.