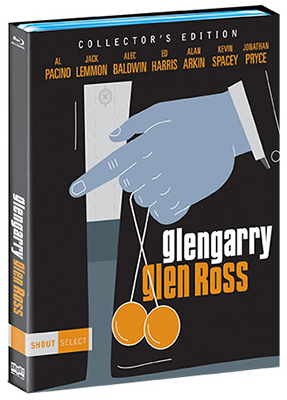 Some movies just have a way of getting in your head and wrapping themselves around your brain. Glengarry Glen Ross, based on David Mamet’s stage play, is such a film. With a powerhouse cast (including four Academy Award winners) delivering juicy dialogue, how could it not be? Don’t be surprised if you find yourself quoting the film with regularity after a viewing.

In the 1992 film, as with the play, we meet four real-estate salesmen who will do anything to sell worthless property to customers who don’t want it.

Mamet has found a way to cram so many worthwhile themes, from transition to desperation, into such a simple framework. Jack Lemmon plays Shelley “The Machine” Levine, an elderly salesman who has fallen on hard times. Al Pacino plays smooth-talker Ricky Roma, who is in the midst of a winning streak. Alec Baldwin plays a hotshot from downtown who shows up in a classic cameo written specifically for the actor for the screen version. All are pitch perfect.

Baldwin puts the fear of God into the salesmen by telling them to close a deal or they’re fired. The next day, the office has been ransacked. Sensitive documents have been stolen. The subsequent investigation quickly gives way to one of the classic verbal beatdowns in cinema history, when Pacino berates the inept office manager, played by Kevin Spacey, after he costs Roma a big sale.

These are scenes you could watch again and again with continued fascination at the skill with which these performers give life to the words on the page. Mamet’s screenplay, which he adapted himself, is often hailed as being better than the stage version due to the inclusion of the Baldwin scene, which crystalizes the stakes of the story in a way the stage production only hints at.

Surprisingly, despite its legacy and acclaim, the film earned just one Academy Award nomination, Pacino for Best Supporting Actor. Pacino would lose that race to Gene Hackman in Unforgiven, but got the last laugh the same year when he took home Best Actor for Scent of a Woman. For some people it’s just in the cards. (When the movie came out, Lemmon had been the only Oscar winner in the cast. After Pacino, Spacey and Alan Arkin would later win Oscars, with Baldwin, Ed Harris and Jonathan Pryce earning Oscar nominations).

The new Shout Select Blu-ray presents the film with a gorgeous new 4K digital transfer from the original camera negative that offers a crisp, vivid image. Being sourced from a loquacious stage play, the film’s visual splendors are secondary concerns, though director James Foley and cinematographer Juan Ruiz Anchía do their best to enhance the dreary ambiance of the piece with moody shadows and reflections of rain while bathing the characters in various shades of neon.

In terms of bonus material, the new Blu-ray offers a healthy mix of old and new extras.

The first of the new additions is a 30-minute interview with Foley as he reflects on the development of the film version and the relative ease of the production since he was working with such a talented cast and a tight screenplay. The other is “God Bless Ricky Roma,” a 24-minute interview with actor Joe Mantegna, who won a Tony playing Roma on Broadway in the 1980s.

The Shout Blu-ray also includes two half-hour documentaries from the old 10th anniversary DVD from 1992 that were subsequently included on Lionsgate’s 2016 Blu-ray edition: the “ABC: Always Be Closing” documentary about the psychological intersection of fictional and real-life salesmen, and the “Magic Time: A Tribute to Jack Lemmon” documentary.

The disc also includes two commentary tracks. One comes from Foley that originated on the 10th anniversary DVD and was included on the Blu-ray as well. He offers some good stories about the production, some of which he also recounts in the new interview, but there are lengthy gaps where he just lets the film run without saying a word.

The other commentary is by Jack Lemmon, originally recorded for the 1992 Laserdisc of the film but missing from subsequent disc releases, so it makes a welcome return here. Lemmon is effusive in his praise for his fellow cast members, whom he calls the most talented bunch he ever worked with. His commentary is a fantastic intermingling of stories from the set with tales of old Hollywood from the 1950s and ’60s.

As to what didn’t make it from previous releases, the new Blu-ray jettisons a 10-minute clip of Lemmon on the Charlie Rose show talking about the movie in 1992, and a two-minute bit of Kevin Spacey reciting his “Go to lunch” scene with an audience member on “Inside the Actors Studio.” Both were featured on both the previous DVD and Blu-ray releases, but their absence here is understandable given the problematic revelations regarding both Rose and Spacey that have popped up in recent years. It’s a shame to lose the reflections from Lemmon in the Rose piece, though.

In addition, a couple of extras from the old DVD that didn’t carry over to the 2016 Blu-ray also aren’t resurrected here. These include a scene-specific commentary from the cast and crew, and filmmaker Tony Buba’s short documentary “J. Roy: New and Used Furniture.” So completist collectors who have that 10th anniversary DVD might want to pair this new Blu-ray with the second disc from that set (which offers the pan-and-scan version of the movie along with the extras missing from the later Blu-rays).