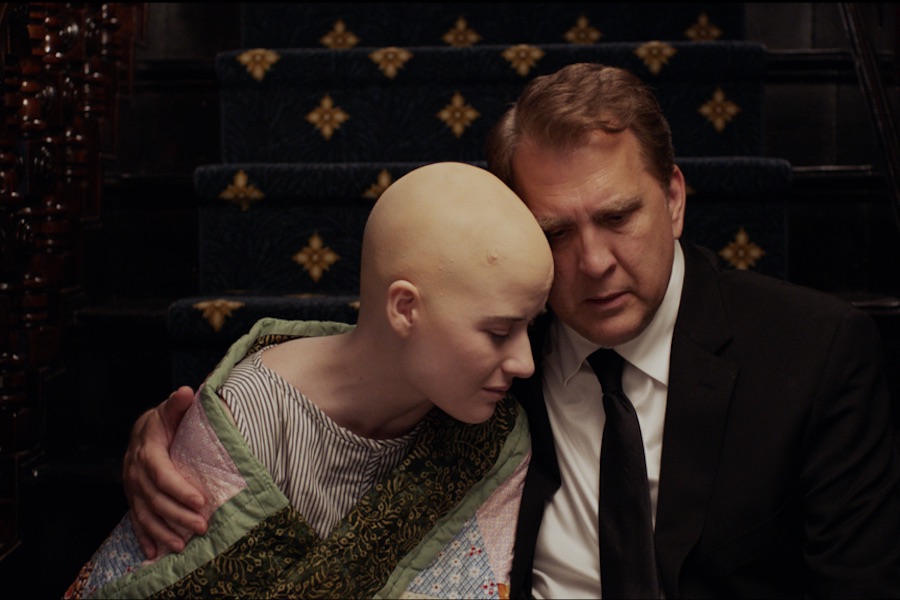 Madelyn Dundon and Daniel Roebuck in Getting Grace

Getting Grace is not only a family film, but for director Daniel Roebuck (who also stars) it’s also a family affair — starting with the title character.

The film, due on DVD Nov. 6 from Random Media, follows Grace, a teenage girl dying of cancer who crashes a funeral home to find out what will happen to her after she dies. Along the way, Grace ends up teaching the awkward funeral director, Bill (Roebuck), how to celebrate life. Not only did Roebuck star in and direct the movie — his feature film directorial debut — but he helped rewrite the script by Jeff Lewis, infusing it with his own experience.

“Grace, as written, is my daughter Grace, who’s never been sick, thank God, but the personality of the kid is my daughter,” said Roebuck, whose face will be familiar to audiences from his long acting career. “My daughter, I watch how she interacts with the world. Sometimes people are a little bit afraid of her, but she always wins them over.”

He lifted an actual incident about his daughter for some dialog in the film about parent teacher conferences and how some teachers found her a pleasure and some hard to teach.

“My actual ex-wife said, ‘Some people get Grace and others never will,’” Roebuck says, noting the same line is recited by Grace’s mother Venus in the film. “That’s how it became Getting Grace.”

Roebuck’s daughter, who wants to be a filmmaker, was a production assistant on the film. But she’s not the only family member involved in the project. Roebuck’s son Buster plays him in a flashback in the film, his wife is one of the producers, his father appears in the movie, his mother’s voice is in the movie, and his brother in law, Cory Geryak, an experienced director of photography, shot the film.

Roebuck also angled his way into shooting Getting Grace in his hometown of Bethlehem, Pa. Bethlehem, founded in the colonial era, took a hit after the collapse of the steel industry, but the city has been able to remake itself as an art hub with such events as Musikfest.

“I just liked that Bill, the character that I played, was old-fashioned in the story and he had to change,” Roebuck said. “I thought that Bethlehem would be the perfect backdrop.”

One scene in the film was shot in “the oldest continually operating book shop in America” located in the city, Roebuck noted.

Roebuck also looked outside Hollywood for his cast.

That includes the titular character played by newcomer Madelyn Dundon.

“She’s terrific,” he said. “She’s a force of nature. She’s something else that kid.”

The film has been well-received by audiences, including those in his hometown, Roebuck said, noting that it elicits big laughs (it’s a comedy after all) and has also inspired people, with at least one viewer saying it helped him handle a cancer diagnosis.

The film, of course, is about getting grace in more than one sense.

“It’s an allegory for God’s grace. That’s what it is to me,” Roebuck said. “I wanted it to represent something greater, which is that God’s grace is available to all of us whether we recognize it or not.”

Special features on the DVD include “Making Grace,” a behind the scenes featurette in which Roebuck looks back on the casting and filming of Getting Grace in his hometown, including interviews with the cast and select cast auditions; Getting Grace Lehigh Valley charity premieres, featuring the cast at three premieres benefitting local charities; commentary from Roebuck; a deleted scene; and the theatrical trailer.