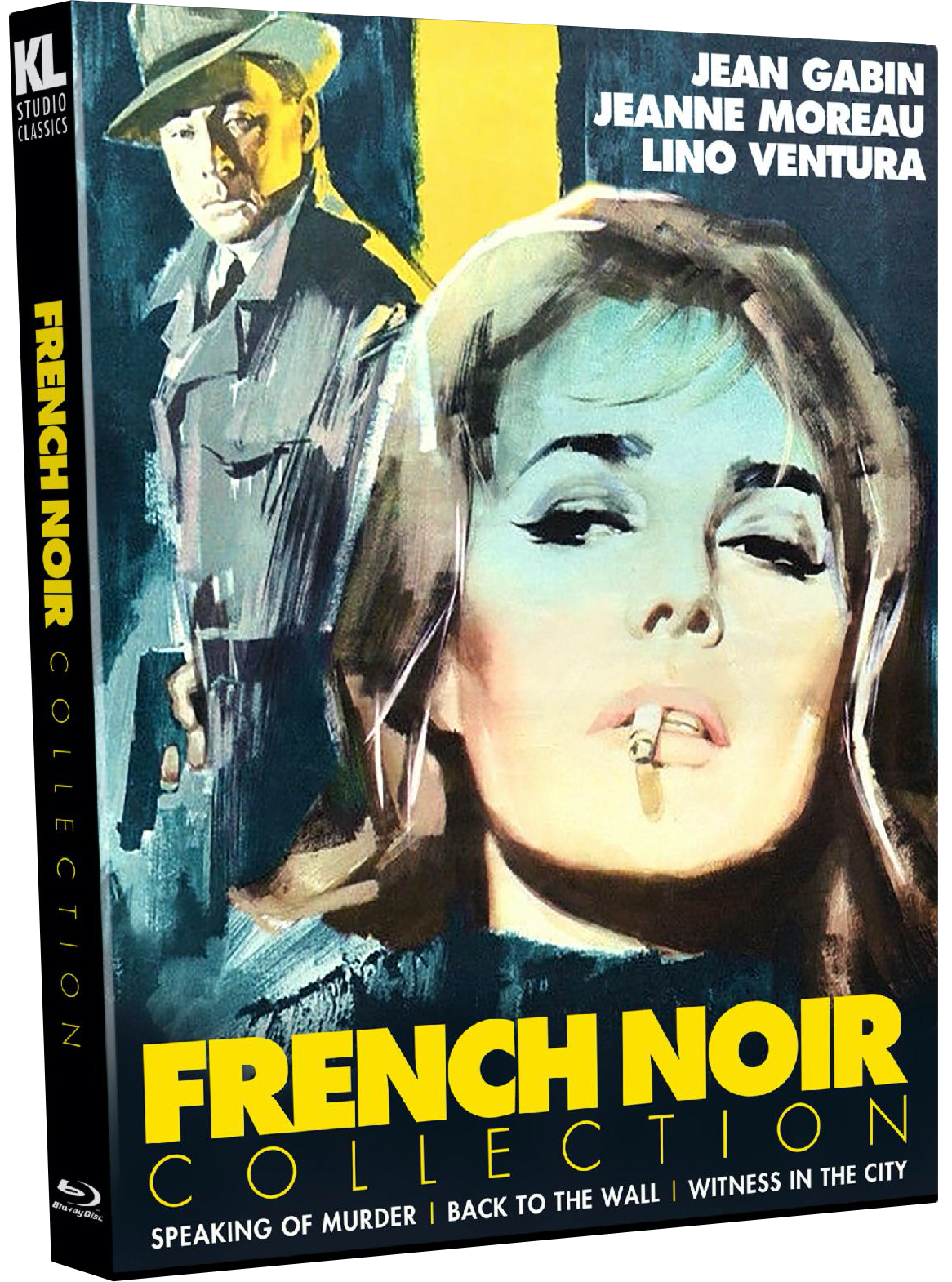 During the Depression, Hollywood’s tack was to dress chorines as pocket change and have them belt “We’re in the Money” to an audience that didn’t have a proverbial pot to piss in. The Dream Factory made a similarly nightmarish blunder at the outset of World War II by depicting Nazis as stock comic buffoons. Lest we forget, it was Moe Howard of the 3 Stooges, not Sir Charles Chaplin, who was the first to lampoon Hitler on film. True to form, the studios adopted a more illusory approach immediately following the war’s end, but after the havoc wreaked on American families, moviegoers wanted their realism served stark and dark. Swapping out studio re-creations for actual locations was a giant step forward in the emergence of film noir. Director Gilles Grangier’s Speaking of Murder takes great pleasure in carrying on this essential tenet of noir.

We’re greeted by a downhearted saxophone infused with regret, but the melody doesn’t linger. The importance of silence is key to our crooks’ communication. After all, if the planning is right, there’s no room for small talk during the course of an armed robbery. Bookended by heists, the broad daylight stickup that opens the show goes off without a hitch, give or take a gun butt kissing a victim’s cheek. Mob boss Louis Bertain (Jean Gabin) uses his garage as a front for his criminal concerns. It’s the first place the gang heads after the robbery. Loose floorboards conceal a mini-ammo dump. Black paint camouflages whitewall tires. Money is divided evenly with everyone getting their fair cut. And it’s all done with nary a word uttered. It’s only when they begin to talk and emotions start to unravel that things go haywire. No one is surprised when after the robbery elder statesman Frédo (Paul Frankeur) pulls a gun on his compatriots. Just another day at the office and a decision Frédo may live to regret.

The first thing you’ll notice about Grangier’s gangsters is their manner of dress. The same trench coats and fedoras worn by their scruffy American counterparts take on a businesslike demeanor when tailored for a Frenchman. And with all due respect to dark glasses, is there anything cooler than a European goomba made even more sinister when viewing the world through slightly tinted specs? To their credit, the filmmakers think like criminals, but not out loud. Why kibitz when there’s work to be done?

Lino Ventura co-stars as Pepito, a cub criminal working for Louis the lion. When combined, their filmographies spawned dozens of gangsters. Ventura had appeared in a handful of crime films starting with Touchez Pas au Grisbi in 1954, compared to the dozens starring Gabin whose career, beginning at the dawn of sound, spanned almost fifty years. In strictly American terms, watching the two share a frame is reminiscent of De Niro’s combustible Johnny Boy in Mean Streets butting heads with Robert Mitchum in his later, more sensible Eddie Coyle period.

To celebrate their success, the boys meet for dinner with their wives and girlfriends in tow. The skirts may not be afforded equal screen time, but there’s more to them than elbow dressing and a pneumatic silhouette. It’s through their taste in men that we begin to dislike the group all the more. As is frequently the custom with pictures of this kind, it’s the women who ultimately bring the world crashing around their vulgar, pistol-packing paramours. Le Catcheur (Thomy Bourdelle), quick to call out Frédo’s honesty, was also the first to play grabass with Pepito’s date.

Hélène (Annie Girardot), a gun moll looking to trade in pajama tops for a golden sheepskin coat, is the Yoko Ono in this band. She’s involved with Bertain’s younger brother Pierre (Marcel Bozzuffi, the actor who will cause you to point at the screen and exclaim, “Isn’t that the guy from The French Connection?). As a test of loyalty, Bertrain flirts with what could have been his future sister-in-law. The moment she begins to show the slightest sign of interest, his slap across her face is punctuated by Bertain yelling, “Whore!” If you’re wondering where he picked up the habit of slapping people, ask his mother. That’s the same punishment meted out when she caught him slapping Pierre.

The climactic caper entails more than a couple of conks to the head. The crisp location work and an insistence that dialog and silence carry the same weight act as glorious reminders of the lost art of storytelling.

Fans of double-edged titles won’t want to miss this highborn, cogently designated melodrama. Jacques Decrey (Gérard Oury), a solitary figure clad in regulation trench coat and wide brim fedora, exits an estate heading in the direction of the camera and through the gate. Is he a killer or a cop? The murder took place at the precise moment the groundskeeper was distracted. All we know about the victim is he was shaving at the time of his demise, hence the electric razor dangling by its cord from the wall socket. The icing in this sordid setup is an overall paucity of substantive dialogue during the first 17 minutes or so of the movie. Without words to guide them, viewers have no choice but to focus on images. That leaves them ample time to draw their own conclusions as to who these mute creatures are and what motivates them. Just don’t trust your hunches. It’s fun to be fooled.

With the stiff coiled in a carpet cinched by a necktie and deposited in the trunk, Decrey entombs his victim in a new wall being added to his industrial plant. We flashback to a few months earlier with Decrey returning home early from a hunting trip to find Gloria (Jeanne Moreau), his wife of eight years, planting a goodnight kiss on the lips of another man. Rather than kick Gloria to the curb, he hires the services of a transom-peeper with a candy ribbon bowtie named Mauvin (Jean Lefebvre), who is surprised to learn his client in not only in possession of the two-timer’s name and address, but that divorce is not the objective. His plan is to adopt a pseudonym and, with the aid of a stack of newspapers, cut and paste blackmail letters. He effectively pays his own ransom by giving his wife $200,000 on the pretext that she’s going to spend it on clothes.

Director Édouard Molinaro’s debut feature has its share of efficacious touches. Decrey’s secretary blowing the dust off his passport before handing it to him is a good indication of how long it’s been since he’s used it. When Gloria presents her lover Yves (Philippe Nicaud) with photographic evidence of their affair, she places the dirty pictures on the music desk of a piano. One can’t help but admire Decrey’s commitment to detail. He anticipated everything, right down to the last foregone conclusion. The only thing he couldn’t predict was how it would end. Neither will you.

It was a perfect crime. Not pillaging from Hitchcock’s Shadow of a Doubt, but a judge forced to acquit Pierre Verdier (Jacques Berthier) of tossing his mistress from a moving train even though it made the cockles of his heart curdle. Hitch would have been proud. He hated whodunits, another trait director Eduardo Molinaro (A Pain in the Ass, Dracula and Son, La Cage Aux Folles) “borrows’” from the Master to set his story in motion. Even before the credits hit the screen, we were made aware of the killer’s identity. Make that killers. Verdier has the distinction of not only being Witness in the City’s inaugural murderer, but its second victim as well. And what better way is there to throw an audience off kilter than leading them to believe Verdier will be the main character, only to have him bumped off 10 minutes into the picture. At least Hitchcock gave Janet Leigh 47 minutes worth of screen time before sending her to the shower.

Verdier arrives home in the middle of what appears to be a robbery that isn’t. What kind of a home invader would purposely ignore the gun he found in a desk drawer or go through the trouble of cutting the electricity while leaving the phone connected? It’s Ancelin (Lino Ventura), the killer cuckold rummaging through the contents of the apartment belonging to the man who an hour or so earlier left him a widower. It’s another chilling reminder of how to keep an audience in suspense without making so much as a peep. When Ancelin finally spoke, it was to inform Verdier that the jury may have dropped the charges, but he hasn’t. While making a last pass through the shadows to make sure he hasn’t forgotten anything, the audience is reminded that the body hanging in the sitting room belongs to Verdier.

A cabbie that Verdier phoned for is there to greet Ancelin as he exits. Assuming the latter was the one in need of a lift, unwitting witness Lambert (Franco Fabrizi) demands that he make good on the 400 francs he’s out. Ancelin soon learned that murders are like potato chips; you can’t finish off just one. By now, Ventura was more than capable of what has since come to be referred to as opening a picture. His deep-set badass eyes and razor sharp profile are tough to tune out. Borrowing a page from Jean-Pierre Melville (Bob le Flambeur, Le Silence de la Mer, Le Doulos), Molinaro relies on Ancelin’s outsider status, an innocent man who, when called for, was capable of getting in touch with his dark side quicker than you can say “Robert Ryan.”

Of the three films in the collection, Witness in the City offers the most strikingly complex tour of Paris’s underbelly thanks to hard-edged lenswork of France’s King of the Night, cinematographer Henri Decaë (Elevator to the Gallows, A Double Tour, Le Samourai). Decaë broke his bones as a cameraman in the French army. After the war he worked on documentary shorts and industrial films, the combination of which helped to infuse his films with a sense of reality. The tension is shattered just long enough to introduce unwelcome comic relief in the guise of a wrestling bartender. Thankfully, it doesn’t take long for the film to remember what genre it is before concluding with a foot chase through a neighborhood aviary.

Those looking for bonus features are out of luck. The only perks this package has to offer is a trio of trailers.