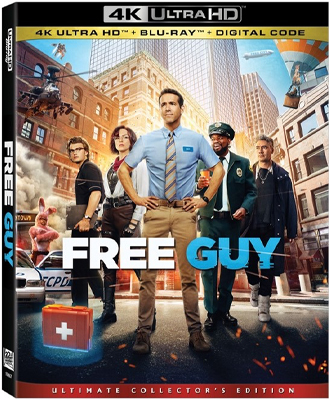 The initial marketing campaigns for Free Guy suggested it would be another film attempting to present the story from the point of view of characters otherwise not considered alive. In this case, a non-player character (NPC) in a video game, making the film essentially a live-action spin on Wreck-It Ralph.

However, what appears at first to be another derivative story about video games is instead a smartly written, sharply funny sci-fi action comedy.

That isn’t to say the film is wholly original, but it blends recognizable elements from a number of sources in a way that works to give the film its own flavor.

Ryan Reynolds plays Guy, an NPC in a video game called Free City, which is also the name of the city that serves as the game’s primary location where players engage in all sorts of action-adventure missions such as car chases and bank heists. Guy works as a bank teller at the city’s bank that is always being robbed, but he dreams of a life of more than just needless repetition, and notes that the people having all the fun are wearing sunglasses.

So, one day, he confronts a bank robber and steals their glasses, and when he puts them on he discovers a whole new world that exists on top of his own, as he can now access the heads up display of the gamer, allowing him to engage them on their terms.

So, off the bat we get elements of The Lego Movie, with the conformist character’s desire to expand his horizons; The Matrix, with the simulated world where outsiders can manipulate time and space; and They Live, with the sunglasses unveiling the true nature of the world.

Guy then meets Molotovgirl (Jodie Comer), who fits all the parameters of Guy’s ideal woman, so he instantly falls in love with her. She’s a player who seems to be on a different mission than everyone else, and at first believes Guy is a another player like herself, so she gives him tips on how to level-up in the game in order to be able to help her.

In the real world she’s actually a programmer named Millie who once helped design an open world gaming code that was purchased by a larger company but then scrapped, though she believes it was used as the base code for Free City, so she’s trying to infiltrate the game to find proof (shades of Tron).

She and other gamers soon come to realize that Guy is in fact an NPC, which astonishes them, while alarming the owner (Taika Waititi) of the company that makes Free City, who is trying to stop Millie from uncovering the truth about the game.

It turns out there’s an actual story reason why Guy seems to be an NPC come to life, which not only plays into the larger narrative of what Millie is seeking, but also makes the film a legitimate piece of sci-fi with a message about pushing past the constraints that sometimes seem built into existence. But the film also pokes fun at gaming culture, including live-streaming game play.

The 4K Ultra HD combo pack includes the film on a 4K disc with no extras, and a regular Blu-ray with the film and all the extras, consisting of several behind-the-scenes featurettes, a five-minute gag reel and some deleted scenes.

The featurettes, which run about 45 minutes total, are pretty extensive and showcase how director Shawn Levy and his talented cast crafted them film using some unique visual effects techniques. There’s a 15-minute general making-of, a seven-minute piece on Comer, an eight-minute piece on Waititi, and a 15-minute examination of a key action sequence with Reynolds. There’s also a two-minute video about the visual effects contraption used to record some of the actors’ faces.

There are two minor deleted scenes — one runs about a minute and features Guy musing about the nature of the world, the other is a 30-second action gag — and a four-minute extended sequence.

The disc also includes three of the film’s trailers.

Unfortunately, the disc doesn’t include any kind of commentary track, which could have been a fun one given the cast involved, especially if Reynolds and Waititi did one in character as their Marvel characters Deadpool and Korg, like they did for a YouTube reaction video to one of the trailers.