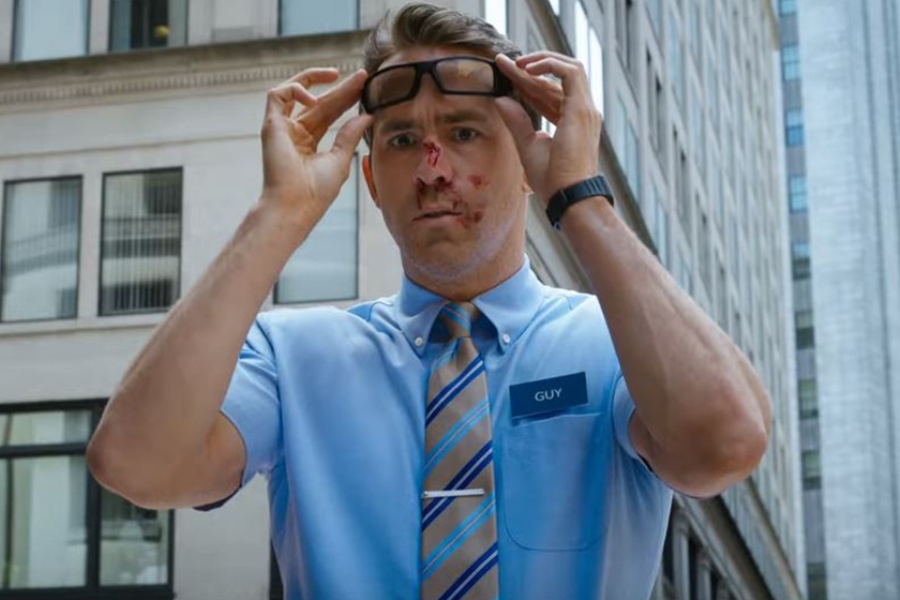 The action comedy Free Guy stars Ryan Reynolds as a bank teller who discovers he is actually a background player in an open-world video game and decides to become the hero of his own story — one he rewrites himself. Now, in a world where there are no limits, he is determined to be the guy who saves his world his way, before it’s too late. The film has earned more than $114 million at the domestic box office and $317.5 million worldwide. It arrives on Blu-ray Disc, DVD and 4K Ultra HD Blu-ray Oct. 12. 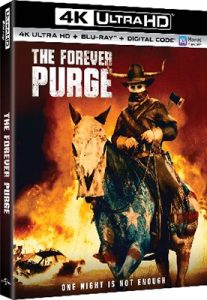 Universal Pictures Home Entertainment releases The Forever Purge on Blu-ray Disc, DVD and 4K Ultra HD Blu-ray Sept. 28. Produced by Blumhouse, The Forever Purge is the fifth film in the “Purge” franchise that chronicles a dystopian future where society cleanses itself by abandoning all laws for one night. In the new installment an underground movement no longer satisfied with the annual night of anarchy and murder decides to overtake America through an unending campaign of mayhem and massacre. On the morning after the Purge, a masked gang of killers attacks a wealthy Texas ranching family and their workers. Exposed by daylight, the two groups are forced to band together and fight back as the country spirals into chaos and the United States begins to disintegrate around them. The cast includes Ana de la Reguera, Tenoch Huerta, Cassidy Freeman, Leven Rambin, Josh Lucas and Will Patton. 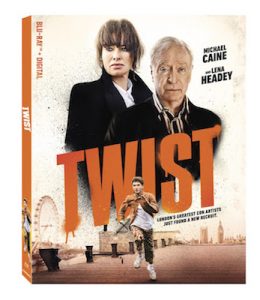 The crime thriller Twist arrives on Blu-ray (plus digital) and DVD Sept. 28 from Lionsgate. Inspired by Charles Dickens’s iconic novel Oliver Twist, the film set in contemporary London follows the journey of Twist (Raff Law), a gifted graffiti artist trying to find his way after the loss of his mother. Lured into a street gang headed by the paternal Fagin (Michael Caine), Twist is attracted to the lifestyle — and to Red (Sophie Simnett), an alluring member of Fagin’s crew. But when an art theft goes wrong, Twist’s moral code is tested as he’s caught between Fagin, the police and a loose-cannon enforcer (Lena Headey). 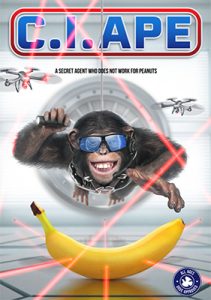 Lionsgate releases the family friendly comedy C.I.Ape on DVD and digitally Sept. 28. In the world of espionage, some missions require an agent with a unique set of skills, possessing not just bravery but an ability to melt even the most villainous heart. This is a job for Sam, aka C.I.Ape, the first-ever chimpanzee to join the CIA. When a criminal plot is discovered, the CIA turns to the talking chimp — their most unique operative — to foil the plot from the inside. The cast includes Sophia Alongi, Skip Schwink and Madelyn Kientz.

The documentary Roadrunner: A Film About Anthony Bourdain will be released via digital sellthrough Sept. 28 from Universal Pictures Home Entertainment. The documentary is an intimate, behind-the-scenes look at how an anonymous chef became a world-renowned cultural icon. From Academy Award-winning filmmaker Morgan Neville, the film is unflinching look at Bourdain, who published several books, appeared on the Bravo series “Top Chef” and had his own series “No Reservations.” He also appeared in the film The Big Short. Bourdain died of an apparent suicide in 2018. It arrives on DVD Oct. 12.

Horror and thriller titles A Day of Judgment, Midnight and The Fourth Victim arrive Sept. 28 from Severin Films and MVD Entertainment Group. 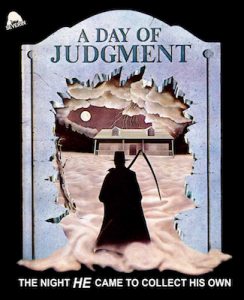 A Day of Judgment (1981), available on Blu-ray and DVD, comes from Earl Owensby Studios, the South’s biggest producer/distributor of ’70s and ’80s regional horror and exploitation hits. In this obscure and bizarre slasher movie in a 1930s small town rife with lust, corruption and sin, a mysterious figure wielding a scythe arrives to cut an unholy swath of murder, madness and moralizing that may lead straight to Hell. William T. Hicks (Death Screams), Brownlee Davis (Wolfman), Jerry Rushing (Final Exam) and Harris Bloodworth star in this film now scanned in 2K from the IP for the first time ever. Extras include “The Atheist’s Sins,” an interview with author of Nightmare USA Stephen Thrower and “Tales Of Judgment,” an interview with filmmaker Worth Keeter and writer Thom McIntyre. 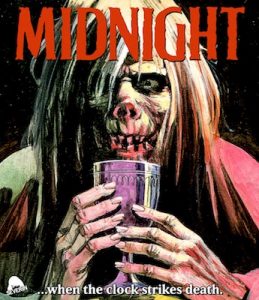 Midnight (1982) is also available on DVD and Blu-ray. A decade after co-writing Night of the Living Dead, writer/director John Russo gathered members of George Romero’s Pittsburgh crews to film a new shocker fueled by equal parts grisly grindhouse jolts and ’80s satanic panic. Fleeing her pervy alcoholic stepfather (Lawrence Tierney of Reservoir Dogs), a hitchhiking teen (Melanie Verlin) is abducted by a family of crazed homicidal rednecks for an ordeal of graphic butchery, shag carpet and devil worship. The film is scanned in 4K from the negative of the long-rumored uncut version with all-new special features. Extras include an interview with writer-director John A. Russo, an interview with producer Samuel M. Sherman, an interview with actor John Amplas, an interview with SFX artist Tom Savini, and the trailer. 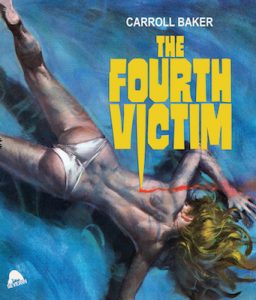 The Fourth Victim (1971), a mystery thriller arriving on DVD and Blu-ray, is a rarely seen giallo. Golden Globe winning/Academy Award nominated Hollywood exile Carroll Baker (Baby Doll, Something Wild) stars as the new bride of a wealthy British playboy (Michael Craig) whose three previous wives met with suspiciously accidental deaths. The Italian/Spanish co-production is scanned in 2K from the original negative. Extras include “Eugenio Martín, Auteur,” an interview with Eugenio Martín biographer Carlos Aguilar, a deleted scene, and the trailer.

Arriving on Blu-ray Disc and DVD Sept. 28  from Kino Lorber is 1960’s Seven Days … Seven Nights (aka Moderato Cantabile), starring Jeanne Moreau, Jean-Paul Belmondo, Pascale de Boysson, Jean Deschamps, Didier Haudepin and Colette Regis. The black-and-white French film from director Peter Brook stars Moreau, who won the award for Best Actress at the 1960 Cannes Film Festival, as Anne Desbarèdes, a wealthy, bored housewife who believes she has witnessed a murder in a quayside bistro. Rushing to the scene of the crime, she strikes up a conversation with Chauvin (Belmondo), an employee of her husband who also saw the crime. The troubled woman continues to return to the café, increasingly identifying herself with the murder victim and becoming obsessed with Chauvin. Includes trailers and a new audio commentary by filmmaker/historian Daniel Kremer.

Also due Sept. 28 on DVD and Blu-ray Disc from Kino Lorber is 1978’s The Hunter Will Get You (aka L’Alpagueur), starring Jean-Paul Belmondo, Bruno Cremer, Laura Antonelli, Jean Negroni, Jean-Pierre Jorris and Patrick Fierry. The French film from writer-director Phillippe Labro sees Belmondo play “L’Alpagueur,” a tough-as-nails mercenary named Roger Pilard who does what the police are unable to do — for a price, of course. After busting a drug-trafficking ring in Rotterdam, Pilard is put on the trail of “L’Épervier” (“The Hawk”), a ruthless thief who employs petty criminals to help him rob banks and then murders them. One of these criminals narrowly escapes death, but is captured and put in prison. Pilard, adopting a false identity, arranges to be placed in the same cell. There he learns how to track down “The Hawk,” who, in the meantime, has carried out a final act of vengeance. Will the hunter get his hawk? Includes the theatrical trailer, an interview with Labro, and new audio commentary by film historians Howard S. Berger, Steve Mitchell and Nathaniel Thompson.

Also due Sept. 28 on Blu-ray Disc and DVD from Kino Lorber is 1973’s Lucky Luciano, starring Gian Maria Volonte, Rod Steiger, Edmond O’Brien, Vincent Gardenia, Charles Cioffi and Larry Gates. The Italian film from director Francesco Rosi paints an epic portrait of notorious Mafia boss Charles “Lucky” Luciano. In 1946, after serving time for the murder of his colleagues in crime, Luciano was pardoned and sent back to his homeland of Sicilia. Rather than changing his life around, it was here that he became one of the most powerful leaders of crime the world has ever known. Includes a 4K restoration from the original camera negative, trailers, and a new audio commentary by film critic and author Simon Abrams.

Another Sept. 28 Kino release will be 1973’s A Full Day’s Work (aka Une journee bien remplie) on DVD and Blu-ray Disc. In this French-Italian comedy, Jacques Dufilho plays a father who has carefully planned the execution of the nine jurors who sent his son to the gallows. Dressed in black, on a black motorcycle with his elderly mother (Luce Marquand) in the sidecar, the vengeful man calmly and methodically does away with each of the nine in the span of a single day — before the police or anyone else can stop him. Includes a 4K restoration from the original camera negative, trailers, and a new audio commentary by film critic and author Simon Abrams.

Code Red Sept. 28 releases 1979’s Story of a Woman on Blu-ray, starring Robert Stack, Bibi Andersson, James Farentino, Annie Girardot, Frank Sundstrom and Birgitta Valberg. From Leonardo Bercovici, the co-writer of The Bishop’s Wife, Kiss the Blood Off My Hands and Portrait of Jennie, comes this passionate love story starring Ingmar Bergman regular Bibi Andersson. While studying to be a concert pianist in Rome, a Swedish girl named Karin (Andersson) falls in love with a handsome medical student named Bruno (James Farentino). When she discovers that Bruno is married to an older woman, she heads home to Sweden and marries an American diplomat (Robert Stack). The diplomat is then assigned to Rome, where Karin becomes torn between the two men. Includes a musical score by the legendary John Williams.