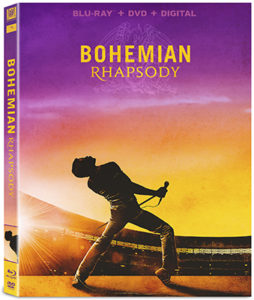 Twentieth Century Fox Home Entertainment is preparing for the upcoming home release of the hit music biopic Bohemian Rhapsody with a series of promotions celebrating the film and the music of Queen.

Fans in New York City (Jan. 25), Austin (Jan. 30), Las Vegas (Feb. 5) and Los Angeles (Feb. 12, the day the disc becomes available in stores) will have a chance to hop on board the double-decker Rock Like Queen Tour Bus and sing along to their favorite Queen songs. Fans can sign up for a spot on the Rock Like Queen Tour registration site (click here to access).

The Rock Like Queen Tour will culminate in Los Angeles with a celebration at the legendary Whiskey A-Go-Go on the famed Sunset Strip. The celebration will include musical tributes to Queen and the late lead singer Freddie Mercury, a performance by the Queen Extravaganza tribute band, and more. Free tickets are available online by clicking here.

Fans who can’t make the Rock Like Queen Tour  can join the fun at home via a new Amazon Alexa skill that allows fans to sing “Ay-Oh” with Freddie Mercury when they call out “Alexa, play Ay-Oh live!” It’s a recreation of the band’s celebrated 1985 Live Aid 1985, which is prominently featured in the film. Fans can activate the skill via Amazon Alexa devices Jan. 22 through March 31.

Fox is mounting a social media promotion, inviting fans to “Stomp, Stomp, Clap.”  To join #StompforQueen fans can re-share the just-released video found on Bohemian Rhapsody official channels (Facebook/Instagram @bohemianrhapsodymovie and Twitter @BoRhapMovie) or post their very own “Stomp, Stomp, Clap” on any social platform. Fox may include some of the videos in a tribute video to Mercury, launching in February. A worldwide $100,000 donation will be made to the Mercury Phoenix Trust founded by Queen founding members Brian May and Roger Taylor in memory of Mercury.