The 1990 science-fiction thriller Flatliners and the “Running Out of Time Collection” of Hong Kong action are being released on Blu-ray in August from Arrow Video and MVD Entertainment Group. Known for his eclectic filmography and for helping to launch the careers of several young Hollywood stars of the ’80s and ’90s, Joel Schumacher (The Lost Boys, St. Elmo’s Fire) tackles the question of what happens after death in Flatliners, due Aug. 2 on both 4K Ultra HD and Blu-ray Disc. The film, which stars Kiefer Sutherland, Julia Roberts, Kevin Bacon, William Baldwin and Oliver Platt, follows five ambitious medical students who subject themselves to a daring experiment, temporarily inducing their own deaths, hoping to glimpse the afterlife before being brought back to life. As competition within the group intensifies and their visions of the world beyond increasingly bleed into their waking lives, they learn that the greatest threat comes not from the spirit world but from the long-suppressed secrets of their own pasts. Each release features a new 4K restoration from the original negative, approved by the director of photography Jan de Bont (Basic Instinct). First pressings will include an illustrated collector’s booklet featuring new writing on the film by Amanda Reyes and Peter Tonguette. 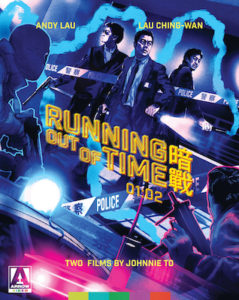 Next, on Aug.30, Arrow will bow the “Running Out of Time Collection” on Blu-ray. The two-disc set includes two Hong Kong action thrillers from director Johnnie To. In 1999’s Running Out of Time, Andy Lau stars as a cancer-ridden criminal who challenges a police negotiator (Lau Ching-wan) to a 72-hour battle of wits and courage. The film earned six nominations at the 19th Hong Kong Film Awards including Best Film and Best Director. For his performance as the complicated criminal, Lau took home the award for Best Actor. Two years later, Ching-wan returned to the role of Inspector Ho Sheung Sang in the 2001 sequel Running Out of Time 2. In this go-around, Ching-wan battles wits with a clever criminal (Ekin Cheng) that has plans to extort money from a wealthy businesswoman (Kelly Lin). Running Out of Time 2 earned five Golden Horse Awards nominations, including wins for Best Action Choreography and Best Film Editing. Special features include new audio commentary tracks for each film with Hong Kong film expert Frank Djeng and the 2003 documentary Hong Kong Stories.