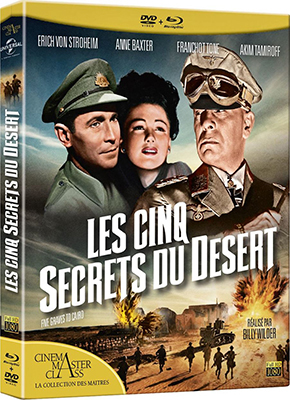 Given Kino Classics’ laudable current endeavor to bring the cream of the 1929-49 Paramount library out on Blu-ray, it will will likely get around to releasing what remains one of Billy Wilder’s least-seen films (and an early collaboration with producer/co-writer Charles Brackett as well), maybe even sooner rather than later. But one of my ubiquitous “twilight” life projects is to go through Wilder’s output chronologically (as well as that of other filmmakers of his stature) in their best available renderings, and All-Region Elephant Films from France has done standout work with vintage Paramounts-that-matter almost straight down the line. So, here we go.

Set in slight flashback for in the time it was made against what looks to be one of the most geographically granular parts of Egypt, 1943’s Five Graves to Cairo was just the second Hollywood movie that Wilder directed, sandwiched between the still charmingly hilarious The Major and the Minor and all-timer Double Indemnity, whose sordidness apparently so offended Brackett’s outward Southern gentleman to such a degree that he took a pass on contributing to it. In World War II terms, Cairo’s geographical backdrop is here located in what at least for now is German Gen. Erwin Rommel territory, with Franchot Tone playing the one surviving member of a British Eighth Army tank crew who’s been whipped along with his other  colleagues during the recent conflict. The picture’s opening visual is a British tank full of corpses and an unconscious Tone — which means that no one is actually piloting the currently aimless vehicle that keeps rolling up and then down one sand dune after another. I first saw Cairo when I was about 12 in 1960 and have never forgotten this shot. Movies are funny that way, just as brief real-life remembrances are.

After what seems like a long hike during which he has to be seriously dehydrated, the barely alert Tone stumbles upon a town and its “Empress of Britain Hotel” — which is about free of Brits as you’d expect at this time. Actually, it’s pretty well free of everyone, though there is a proprietor played by Akim Tamiroff, an actor whose ham Wilder can’t always control here. (Speaking just for myself, my perception of Tamiroff only occasionally overcame J.D. Salinger’s characterization of him in one of the author’s anthologized Nine Stories — whichever one it is that describes Tamiroff as the actor who always says, “You make beeg joke — hah?”) There’s also a French chambermaid (Anne Baxter), who’d like to find some way to get help for her permanently injured brother who’s been captured by Germans. The role needs someone more exciting and alluring, and I wish Simone Simon, who apparently tested for it, had been cast instead.

Fortunately, Tone is pretty good here, and there are a couple supporting gems with future echoes of the Brackett-Wilder Sunset Blvd. One is the appearance of that masterpiece’s Erich von Stroheim himself, who cuts an imposing monocled figure as Rommel — a performance whose tone differs a lot from James Mason’s in Henry Hathaway’s The Desert Fox, an intelligent Rommel wartime biopic that I’ve always liked (it was one of the first films ever aired on NBC’s “Saturday Night at the Movies”). The other is an Italian general played by Fortunio Bonanova, who shortly thereafter would have a funny bit in Wilder’s Double Indemnity as a trucker/insurance scammer who fails miserably trying to pull a fast one on Edward G. Robinson, cast as the firm’s near-infallible cheat-sniffer. Wilder goes to town with these characterizations and the fun he pokes at the Italian general — with Rommel always making certain that the latter gets the hotel room where the bathroom doesn’t work when these members of the Axis powers take over the hotel for powwows from time to time.

This officer invasion demands some quick thinking on the part of Tone, who is neither German nor Italian. Conveniently, he takes over the identity of a clubfooted waiter who’s just been killed in a blast — a guy who never previously met Rommel met eye to eye but whom the general knows to have been a Nazi spy, which adds to Tone’s good fortune (at least for a while). Meanwhile, amid all this in-house intrigue, Baxter is reluctantly playing up sexually to Rommel/Stroheim’s favorite staffer lieutenant (it probably helps that she holds no love for the Brits) in an attempt to pull strings for her brother. The young officer’s role is a predictably comfy fit for Peter Van Eyck, who was in the early stages of career of playing German officers that lasted all the way up to swan song The Bridge at Remagen in 1969.

Things get more complicated after this, and how could they not? This is definitely lesser Wilder, but it’s still a movie for grown-ups, which a lot of old Paramounts were. I’m constantly amazed at the level of assumed intelligence on the part of the audience that this old romantic cynic always worked on, and it’s impossible to imagine any Cairo ever having come from MGM — or if so, not unless Louis B. Mayer could shoehorn in a production number or two by Virginia O’Brien or Ginny Simms. (Ironically, the best by far of the era’s Hollywood-produced WWII dramas ended up coming from MGM right at the end of the war with They Were Expendable. Even L.B. wasn’t going to tell the future Rear Adm. John Ford how to go about his business.) I remember reading an interview with Wilder sometime in the early ’60s, when he’d recently caught Cairo on the late show and thought it too preachy. There’s a little of this, but not that much of it for the day, and it comes late in the film.

As old Variety reviews used to say, “Technical credits are ‘pro’” — and the picture got Oscar nominations for cinematography, black-and-white art/set decoration and plus editing by longtime Wilder teammate Doane Harrison, whose association lasted until Sabrina. The cinematographer was John Seitz, who would shoot several of Paramount’s best movies (early Wilders included), and the score is by Miklos Rozsa, whose allegiance stretched, with long layoffs, from Double Indemnity and The Lost Weekend to Fedora). As a result, there’s an “old home week” feel to the movie, which I personally find appealing enough to elevate material that, to an extent, probably cramped Wilder’s style out of a need and necessity to support the troops. As expected, it looks very good on Blu-ray as well.