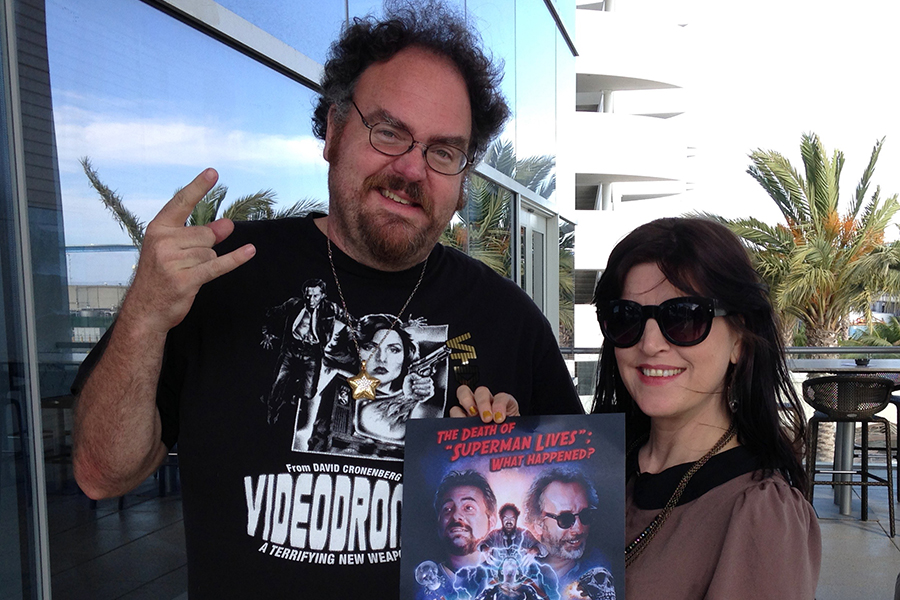 Jon Schnepp with his fiancée, Holly Payne, promoting The Death of "Superman Lives": What Happened? at the 2015 San Diego Comic-Con International.

Filmmaker, writer, animator and larger-than-life YouTube personality Jon Schnepp passed away July 19 from the effects of a massive stroke suffered a week earlier, according to a statement from his fiancée and partner of 16 years, Holly Payne. He was 51.

Schnepp was a longtime editor and director in television, particularly in animation, and was a major creative force behind the 2006-13 Adult Swim series “Metalocalypse,” a parody of the culture of heavy metal music.

In 2015, Schnepp debuted the documentary The Death of “Superman Lives”: What Happened?, in which he chronicles the production history of a Superman film that was supposed to be made in the 1990s by Tim Burton and starring Nicolas Cage, and why it was ultimately scrapped. The film was produced by Schnepp and Payne and received major funding through crowdsourcing.

He was often seen at conventions around the country greeting fans, selling Blu-rays of the documentary and promoting his other endeavors. Schnepp also wrote comic books, and in 2017 authored a comic book based on the band Slayer.

An ardent proponent of geek culture, Schnepp would often refer to himself and his fellow enthusiasts of genre entertainment as “Sweaties,” a reminder of his creed that it was OK to sweat over something you love (and also perhaps a reference to the perspiration such fans would often endure as a result of waiting in long lines during the hot days of Comic-Con to see their favorite actors and creators in panels and autograph sessions). This earned him the moniker “King of the Sweaties.”

In recent years, Schnepp was a major presence online, frequently seen on the Collider YouTube channel’s daily “Movie Talk” show and as host of the channel’s “Heroes” show, which was devoted to movies and TV shows based on comic books. He also made several appearances on the “Movie Fights” show on the Screen Junkies YouTube channel.

On July 9 Schnepp tweeted that he had been “super sick” the previous week, but felt good enough to host the July 9 and 11 editions of “Heroes,” though his voice was noticeably raspy.

Schnepp tweeted July 12 that he had checked into the hospital, apparently to combat the lingering effects of his illness. Scheduled appearances at the July 13-15 Wizard World convention in Boise, Idaho, and at San Diego Comic-Con International were subsequently canceled.

Payne July 13 tweeted that he was in critical condition, and in a statement released July 18 she revealed he had suffered a stroke on July 12, was unconscious and on life support.

In the July 20 statement announcing Schnepp’s passing, Payne stated that he had a blood clot removed from his left carotid artery, but doctors couldn’t stop the bleeding, causing him to experience irreparable brain damage. He died shortly after being taken off life support.

In addition to Payne, Schnepp is survived by his sister, Deborah, and his parents, David and Miriam.

The announcement of his death triggered a wave of condolences from celebrities and fans alike. Collider devoted its YouTube channel to a 24-hour live feed of Schnepp highlights, and Comic-Con’s Trailer Park exhibition July 20 in Hall H showed the trailer to The Death of “Superman Lives”: What Happened? to tremendous applause.

Payne also tweeted that she will be working to complete some of Schnepp’s unfinished projects.