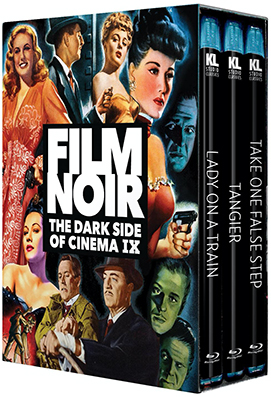 The credits roll over a string of freeze-frame spot gags, all involving people on the verge of taking a wrong step, reminiscent of Warner’s popular Joe McDokes “Behind the 8 Ball” shorts. (There’s a high-wire walker, the groom carrying his bride across the threshold, a young woman hopping a ride with a stranger, and so on.) The last legs we follow carry Prof. Andrew Gentling (William Powell), who pauses for a moment before entering a hotel bar. Gentling arrived in Los Angeles from New York the day before looking to raise the investment capital needed to open a new University. What are the chances of finding a former student cum love interest parked on a barstool awaiting his arrival? Pretty damn good when one considers that Cathryn Sykes (Shelley Winters) caught wind of Gentling’s arrival and planned the impromptu rendezvous. (It was released in 1949 B.P. [Before Poseidon] a time when Universal-International was touting blonde bombshell Winters as the next Jean Harlow.) Both are spoken for — he, happily, she, not so — and Cathryn makes it clear that she’s open to “marrying” Gentling, if only for a few hours.

T.K. Arnspier (Paul Harvey) is a paragon of moral turpitude, a philanthropist known for spreading miles of green, providing the cause is right and the beneficiary void of scandal. Joining Gentling on his fundraising mission are academic colleagues Henry Pritchard (Art Baker, Shinola-white shingling and an immaculate disposition) and Professor Morris Avrum (Felix Bressart, once again answering Central Casting’s call for a crumpled, but cuddly, middle-European philosopher type). No rumpus will be raised on their altruistic watch. Gentling ends their meeting by wryly asking, “If either of you was contemplating anything scandalous between now and tomorrow morning, let me know.” No sooner than Gentling can say, “Foreshadowing!” do we find him accepting Cathryn’s phone invite to a party in her Westwood digs. Even after that happily married educator learned that he was the party’s one and only invitee, he agrees to Cathryn’s request to hit the road in search of a good time.

To the credit of director Chester Erskine and screenwriter Irwin Shaw, Gentling’s devotion to his wife and family remains constant. The first thing he does after accepting Cathryn’s invitation is place a guilt-clearing call to New York asking Helen (Dorothy Hart) to join him in L.A. for a spontaneous vacation. One enduring image shines a fixed spotlight on his familial devotion. He travels with a photo that rests on the telephone table. It’s a picture of Helen with a snapshot of their daughter tucked into the lower left-hand corner of the frame. The upper-right corner is reserved for Getling’s reflection, lovingly beholding what matters most to him. The image is the saltpeter needed to get him through the night.

Gentling and Cathryn never make it to a night spot. Her drunken blubbering becomes too much to bear leaving him with no recourse but to deposit Cathryn on her doorstep. Even then, he finds it impossible to get her out of the car. His only recourse was to abandon the auto and its contents a few doors from home. A bump on Cathryn’s head was an essential touch of character shading necessary to further underscore her groggy state at the time of her disappearance. Andy brakes suddenly and with enough force for Cathryn’s noggin to graze the windshield, her blood staining the scarf of his she borrowed to ward off the evening chill. The reason behind the abrupt halt is never revealed. Returning a few moments later, Gentling spots her groggily inching towards the foot of her home. Assuming all to be well, he drives away.

The next morning during their meeting, Gentling spies Cathryn’s picture splashed across the front page just below the headline, “Housewife Feared Murdered.” For the most part, Powell is playing The Thin Man’s Nick Charles in reverse, a sober-minded, by-the-books professor loved by all. Cathryn’s not the only one crushing on her old professor, as evidenced by friend and former schoolmate/student Martha (the beguiling Marsha Hunt). She’s a crackerjack amateur sleuth in her own right, possessed by the spirit of, if not the spirits in, Nora Charles. It was she who talked him out of reporting the crime to give them time to find the evidence needed to establish his innocence. She also convinced him to trade in the rental car, making it difficult to track, as well as breaking into Cathryn’s home to get to her tell-all diary — it included juicy passages about Gentling — before the cops did. Her crime-solving contributions are far more successful than anything the screenwriters cooked up for the two cops assigned the case, played by the generally dependable Sheldon Leonard and James Gleason.

There is one other character trait that separates Gentling from Powell’s besotted detective in the “Thin Man” series. Asta, his loyal and obedient Wire Fox Terrier, made Nick Charles the envy of dog lovers across the globe. Curiously enough, the guard dog owned by Cathryn’s husband Arnold (Jess Barker) is kind to the two cops entering the house unannounced. When it comes to Gentling, the rabid hound goes full-Cujo on the egghead, ripping into his hand and leaving him in urgent need of a life-saving vaccination. In a scene that to this day remains difficult to watch, Gentling has no recourse but to beat the dog with a candelabra.

The uneven division of comedy and crime eventually gives way to a gripping mystery with more than a few surprises up its sleeve. Special features include the theatrical trailer and commentary by noir maven Eddy Von Mueller.

A very enjoyable serving of World War II propaganda, with a side order of mystery, that begs the musical question, “Who’s That Nazi at My Door?” Shamed war correspondent Paul Kenyon (Robert Paige, an eminently forgettable plank that walks itself) won’t rest until he cracks a big-enough case to land him in the good graces of his publisher. In Kenyon’s mind, all roads lead to Balazar, Madrid’s No. 1 man in the Fifth Column. When not out trying to squash a Nazi ringleader, Kenyon procures the services of Pepe (Sabu), a local crooner who picks up a little scratch on the side trying to pimp the American to Rita (Maria Montez), the star dancer at the hotel cafe. (Her porcupine-quill hat and matching shoulder accessory is enough to keep many a suitor at bay.) Rita’s father and two brothers died at the hands of Balazar. Slowly. No one knew what Balazar looked like, making everyone a suspect. Fernandez (Reginald Denny), a mystery man in a white suit fittingly enough in possession of a mysterious attaché case checks into the mystical confines of Tangier’s Hotel Ritz much to the suspicion of a couple of official-looking house dicks skirting the front desk.

I must confess to loving the closed-captioning option on the remote, the one that offers English subtitles in spite of my sound hearing and relative fluency in the language. It comes in handy when trying to sift through the vernacular of yesteryear — CC allowed me to fully appreciate every chorus of Groucho’s “Lydia, the Tattooed Lady” — as well as deciphering the films of Guy Ritchie. And were it not for CC, I never would have realized that the parrot on “The Abbott and Costello Show” cawed, “F**k You!” Though not as delightful as a foul-mouthed Polly, the biggest laugh in this boxed set can be found at the head of Tangier. One can’t pin all the blame on the confused subtitler. After all, Pepe’s “Excuse me sir, you’re new in Tangier, aren’t you?” could be mistaken for a pick-up line. The closed-captioner could have sworn to have heard Pepe (Sabu) propositioning Denny for a night of rough trade, when in truth he was asking if he’d like to employ the services of a “guide,” not a “guy.”

The film is notable for Sabu’s crooning a spirited round of “Polly Wolly Doodle” topped by a mournful rendition of “She’ll Be Coming ‘Round the Mountain,” as well as a nifty plot twist. Long before Marni Nixon made a name for herself “ghost singing” for Deborah Kerr in The King and I, Natalie Wood in West Side Story and Audrey Hepburn in My Fair Lady, leggy Louise Allbritton “ghost gammed” for Maria Montez. At one point in the show, Rita stealthily danced offstage to be quickly replaced by Dolores (Albritton). This affords Rita enough time to ransack Fernandez’s room in search of the diamond to be used as payment for the release of a Nazi war criminal.

At 74 minutes, the film barely has time to catch its breath. Directed by Universal Horror Miester George Waggner (The Wolf Man, The Climax), the film was adapted from Alice D.G. Miller’s original story by M.M. Musselman and Monte Collins. If the name of the latter sounds familiar, Collins appeared in over 100 shorts during the studio era, including an unforgettable cameo as the mother of The Three Stooges in “Cactus Makes Perfect.”

Special features include the theatrical trailer and commentary by Felicia Feaster.

In his landmark essay “Notes on Film Noir,” Paul Schrader argues that every film made between The Maltese Falcon and Touch of Evil were visually impacted by the style that emerged from Hollywood during the war years. Style, not genre, as film noir was a movement similar to Italian neorealism that existed during a specific moment in history, not through time. Only in the loosest terms can dandelion fluff like Lady on a Train be mistaken for film noir, particularly when Deanna Durbin’s one unequivocally everlasting noir, Robert Siodmak’s dark delicacy Christmas Holiday,  has yet to find a home on home video. Not even on DVD!

Durbin stars as Nikki Collins, a ditzy dime-novel junkie hooked on mayhem, who witnesses a murder occur outside the window of her train. It’s a good premise that dead ends even before the train reaches Grand Central Station. She tries to report the crime to the police, but it’s Christmas Eve and Officer William Frawley is too busy decorating the precinct Christmas tree to be bothered by a homicide. Nikki tells the Pullman Porter about the killing but when it comes time to talking to her father, there’s no mention of murder. In this harebrained outing, the law is shown to be so ineffectual that Nikki would rather rely on the services of her favorite mystery writer, Wayne Morgan (David Bruce) to help solve the murder. Nothing’s funnier than Durbin’s rear-screen stroll among the elevated tracks. As for dartboard plotting, she stumbles into a movie theater just in time to spot a newsreel featuring the murder victim.

Directed by Charles David, who rose the ranks as producer for Alexander and Zoltan Korda before tackling this, his penultimate feature. (He only signed two pictures.) Five years later, David and Durbin married, moved to France, and effectively put an end to both their movie careers. They remained together until his death in 1999.

This was one of many attempts by the studio to overhaul Durbin’s career. Dying her hair blonde only resulted in a blonde Durbin. When it came to squeaky-clean images, Doris Day was Stormy Daniels compared to Durbin. Dan Duryea plays a nice guy for a change while Ralph Bellamy once again co-stars as the designated loser. And in a brilliant display of casting against type, Elizabeth Patterson, the kindly neighbor who babysat Little Ricky on I Love Lucy, pimp slaps Durbin in the middle of a funeral. This moment single-handedly made up for One-Hundred Men and a Girl.