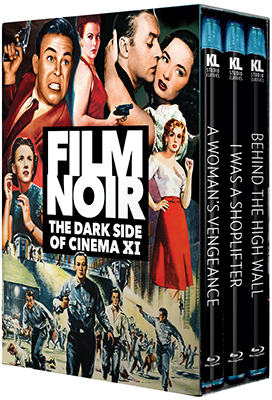 Hollywood in the ’50s saw a brief vogue of genre-spanning releases that merged documentary realism with biography and a specialized subject matter within which to focus their efforts. From topical American spies and communists for the FBI to a blood-curdling teenage werewolf, Frankenstein, and zombie, Hollywood was an “I Was A” kinda town. I was aware of previous qualifying titles (I Was a Spy, I Was an Adventuress, I Was a Male War Bride), but the film that officially christened the “I Was A” cycle was I Was a Shoplifter.

What better way to slather a veneer of authenticity than with monotone narration delivered in a manner frequently associated with classroom films? ​​Before getting down to specifics, our stern narrator rattled off a series of statistics — how much money is spent every Christmas, what percentage goes to in-store purchases, credit (or the installment plan, as it was once called), and how much is lost due to shoplifting. It turns out that in 1950, nine out of 10 shoplifters were women. Boosters ranged from kleptomaniacs, mental defectives, or career dope addicts trying to support their habit. Not looking to fill viewers’ heads with tawdry characters, our titular sneak thief is Faye Burton (Mona Freeman), a perky, poor little rich girl looking to draw attention from her father, a celebrated judge. Jeff Andrews (Scott Brady) is a dick working undercover to crack a shoplifting ring. Andrews not only has the makings of an ace shoplifter, he can light a cigarette in a convertible going 30 miles an hour with the top down. Andrews is stuffing a booster box with furs when he first spots newbie Burton working the cosmetics counter. Director Charles Lamont was Abbott & Costello’s auteur du jour, so it’s no surprise he opens with a touch of humor. When the shop girl asked Andrews if she could be of any assistance, he wryly replied, “We’re helping ourselves.”

A gang of professional shoplifters was on the make for first-time offenders to blackmail into lifting items for their team. The bad guys train Burton while the cops use her as bait to lure them to the big boss man who in this case was a skirt named Ina Perdue (an electrifying Andrea King). Audiences were no doubt fascinated by the technological advancements made in the scientific study of crime on display. Rear license plates with a built-in camera turret made undercover video surveillance work much easier while cops on rooftops conversed with walkie talkies as big as a refrigerator.

It’s Labor Day weekend and Burton was going to spend it in San Diego learning the tricks of the trade. She winds up at the non-existent but real sounding Casa de Manana in La Jolla where she’s about to stage her first professional job, until fate sticks out its foot and trips her up. With Burton trapped inside a moving storage van, we kick off a third act chase sequence through San Diego that extends from La Jolla to National City and all points South of the Border, last stop: backlot Tijuana. The aerial coverage is nothing short of sensational, with tremulous camerawork produced added tension, not Bourne-again shaky-cam head trauma.

For a minute it looked like the curtain was going to wring down in Charlie Chan fashion, with all the characters trapped in one space waiting for the cops to make their big reveal. Luckily, Lamont and company had one last chase left in them that ended with a thrilling shootout through a department store.

The acting is uniformly superb and the production values are strictly top shelf. The direction is by Mamma Korda’s socialist son, and Alexander’s brother, Zoltan (The Macomber Affair, Cry, the Beloved Country), the score by Miklos Rozsa, and cinematography by deep focus shadow sculpture Russell Metty. So where’s the rub? After working on a trio of literary classics — 2 for MGM (Pride and Prejudice, Madame Curie), one for 20th Century Fox (Jane Eyre) — best-selling novelist Aldous Huxley tried his hand at an original screenplay with this adaptation of his short story, The Gioconda Smile. The dialog crackles like a splash of hydrogen peroxide in the ear, but those looking for the author to conquer brave new worlds of cinema will be a bit disappointed by this mashup of Gaslight (which also starred Charles Boyer) and Rebecca (the name of Boyer’s character is “Henry Maurier”) with a splash of The Big Sleep.

In Henry’s estimation, wife Emily (Rachel Kempson) is nothing more than a simpering invalid who places such an enormous burden on her husband that at one point he wished her dead. Turnabout is fair play. Emily admits the only reason she fights to stay alive is that it would make Henry so happy if she died. Henry may have ripped the head off a doll in a fit of anger and the traces of arsenic found in the weed killer he purchased the day before Emily’s death were identified in his late wife’s system. Henry even has Doris (Ann Blythe), an 18-year-old bride-to-be waiting in the wings for the first Mrs. Maurier to croak. But all of these insinuations combined doesn’t make him a murderer. Whodunit? Well, the title doesn’t refer to a man’s payback. Was it baby mademoiselle Doris, man-hating Nurse Braddock (Mildred Natwick), or lifelong friend Janet Spence (Jessica Tandy)?

The real star of the show is Prince of Darkness, Russell Metty. Metty excelled in shadows that bind and constrict, making it impossible for a character to speak with any form of authority. When Maurier reaches for a match to light a candle during a thunderstorm, Janet says, “Don’t! You’re spoiling it.” She’s right. Metty’s hard-edged silhouette cinematography doesn’t look half as good with the lights on.

Special features include a commentary by Professor Jason A. Ney, and the theatrical trailer.

The credits follow a cigarette marked “Lunch Today” as it’s passed around the exercise yard from convict to convict. The butt landed in Kiley’s (John Larch) hand just long enough for him to read the two-word message before sparking a blue tip with his thumbnail and smoking the evidence. Warden Carmichael (Tom Tully) has been assigned head screw in the six months since his predecessor died. If that day’s interview was any indication, the board appears set to turn down his request for a permanent position. The prison break and subsequent kidnapping of Carmichael ended in a car wreck that claimed the lives of all on board, save the warden and convict/hostage, Johnny Hutchins (John Gavin). There’s also a matter of a suitcase filled with stolen loot that Carmichael conveniently buried just in time for Hutchins to regain consciousness.

Before moving behind the camera and ultimately making a permanent switch to television, director Abner Bieberman was a familiar face in many memorable pictures (Gunga Din, The Roaring Twenties. The Leopard Man). As a director, Bieberman was clearly more concerned with his actors than he was with visual storytelling. Alas, even Hitchcock couldn’t wring a performance out of John Gavin, but Tully posed a different problem. The personable supporting player formed a career enlivening soldiers, upstanding lawmen, concerned fathers, and clergymen. So likable was he, that when it came time to take the lead as a double-dealing warden, Tully lacked the dark side needed to motivate such actions. (To see how well a similar character was more convincingly performed, and with much less screen time, check out his work in The Turning Point.)  Other than the cash, and a wheelchair-bound wife (Sylvia Sidney) who at one point assures her husband that their savings could see them through hard times, it’s hard to find the rationale behind framing an innocent kid for the death of a cop, intentionally torching a crucial piece of evidence, and walking off with a suitcase filled with green.