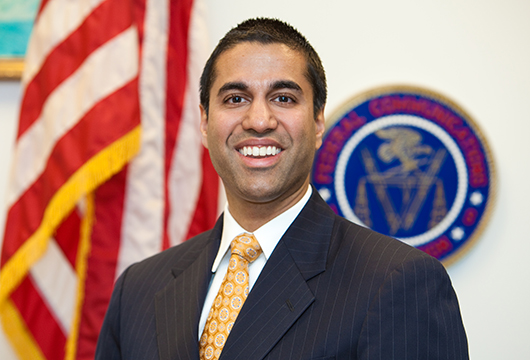 Federal Communications Commission chairman Ajit Pai has cancelled a planned Jan. 10 appearance at CES 2018 in Las Vegas. The agency gave no official reason for Pai’s decision, which was disclosed Jan. 3 by the Consumer Trade Association, which owns and operates CES.

The chairman was slated to participate in a panel discussion with Federal Trade Association acting chairwoman Maureen Ohlhausen, and moderated by CTA CEO Gary Shapiro.

The annual CE trade show would have been Pai’s first as FCC chairman, following his appointment to the position by President Trump.

Pai has come under pressure following his orchestrated (in a 3-2 commission vote along partisan lines) push to repeal net neutrality guidelines regulating the Internet as a utility.

The repeal has been criticized by civil liberty groups contending the decision gives Internet Service Providers too much control of the Web.

In a statement, Shapiro said he looked forward to “our next opportunity to host a technology policy discussion with [Pai] before a public audience.”