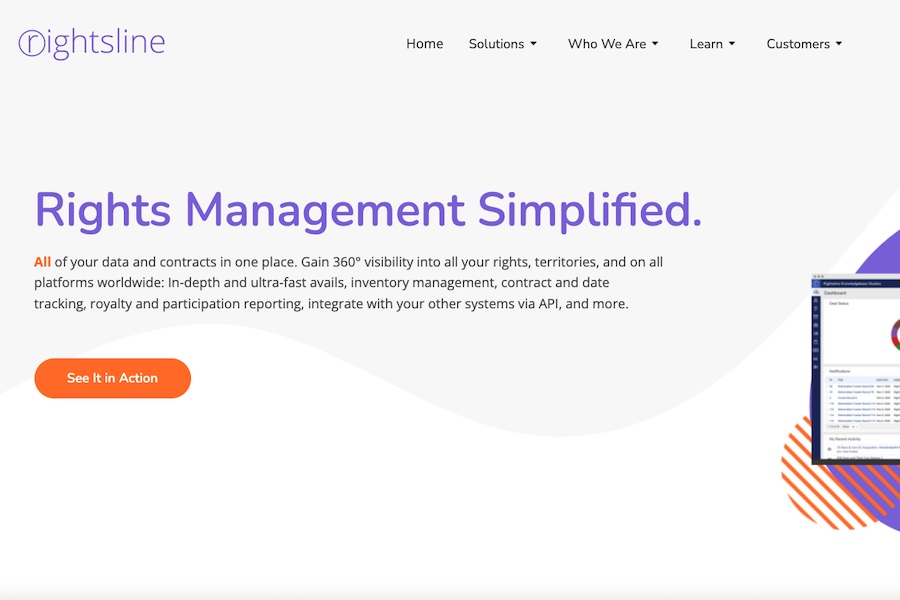 Rightsline, a rights and finance management platform for the media and entertainment industry, has acquired Real Software Systems.

The move extends Rightsline’s core IP rights management services to fully support end-to-end financial and royalties workflows while simultaneously expanding its market from media and entertainment into gaming, publishing, consumer products, life sciences and high tech, among other global industries, according to the company.

“Before this acquisition, Rightsline was already the established leader for managing Hollywood’s global IP rights,” Patrick Arkeveld, CEO of Rightsline, said in a statement. “With this acquisition, we’ve assembled a product suite designed to manage the entire lifecycle of IP monetization for nearly any company, in any industry, anywhere in the world.”

Rightline’s entertainment customers include nearly every major studio and streaming platform, according to the company.

Since its founding in 1993, Real Software Systems has grown to become a leading provider of IP commerce software globally, with its Alliant platform managing more than $12 billion in royalties annually across multiple industries. Alliant automates the contractual rights, royalties accounting, revenue-sharing and profit sharing of more than 70 companies with a wide range of underlying IP.

“We’re incredibly proud of Real’s success as software engine builders and pioneers in the IP Commerce space,” Real CEO Kent Sahin said in a statement. “We’re equally proud to be teaming up with Rightsline to fulfill a longstanding goal of providing a comprehensive, unified, and flexible platform for IP commerce businesses. We’re confident that our combined team and product offerings will do just that.”

Real’s clients span pharmaceutical and life science firms including Gilead and Merck; tech leaders including Dell and Infor; game creators such as EA and Ubisoft; publishers such as Getty Images and Thomson Reuters; media and entertainment leaders such as Legendary and MGM; and consumer-focused companies such as Hallmark and American Greetings.

The integration of Rightsline’s and Real’s systems will provide expanded capabilities for existing customers, including BBC Studios, AMC and the Public Broadcasting Service, according to a press release. Seamless data exchange and complementary feature build-outs will provide operational efficiencies to teams already using both Rightsline and Alliant, allowing them to replace time-consuming, multi-system workflows with higher value strategic activities, according to the press release.

“Combining Rightsline and Alliant from a product standpoint allows us to bring to market the first truly horizontally-integrated IP Commerce platform supporting robust Contract Lifecycle Management functions, availability and library maximization algorithms, as well as the myriad complexities of IP-based financial calculations on a scale never before achieved,” Rightsline chief technology officer Matt Bricker said in a statement. “We have been signaling our commitment to unify the IP supply chain by focusing on increasing our financial capabilities. This transaction demonstrates the reality and scope of that commitment.”

In November 2020, Rightsline was acquired by Klass Capital, a Toronto-based investment firm, in a majority transaction.

The terms of Rightsline’s acquisition of Real were not disclosed. Real’s employees will join Rightsline.