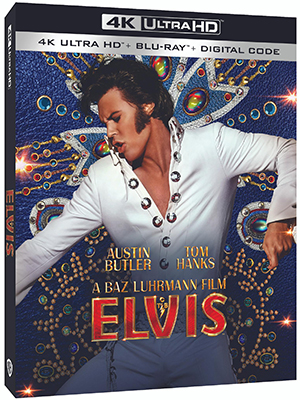 Director Baz Luhrmann spotlights the career of Elvis Presley with his usual visual flair and penchant for musical embellishment. In this case, the King of Rock and Roll’s unique rockabilly blend of country, gospel and R&B would nominally make the subject matter a nice fit for him.

Narratively, however, Luhrmann decides to examine Presley’s life through the perspective of his manager, Colonel Tom Parker (Tom Hanks), who was widely considered one of the most disreputable men in the entertainment industry, and likely fleeced Elvis out of millions of dollars of potential earnings.

Austin Butler gives an energetic performance as Elvis, pouring his heart out in the musical numbers to re-create the King’s signature stylings that made the ladies swoon.

The key role of Parker, however, doesn’t quite fit in tonally with the proceedings, as seems less like a real person and more like it’s just Hanks with some over-the-top make-up and a bad accent. Famously, this is the role that Hanks was filming in early 2020 when he was among the first celebrities to become infected with COVID-19.

The film is presented mostly as a contrast between Elvis’ desire to have a memorable and significant life, and Parker’s efforts to control him like a figurative puppet master (coincidentally, Elvis is hitting Blu-ray not long after the release of Disney’s live-action Pinocchio, in which Hanks plays a literal puppet master). As presented in the film, Elvis grows to resent Parker for what he sees as hampering his fame.

Luhrmann covers the touchstones of Elvis’ career, from his fascination and incorporation of African-American musical styles, to his 1968 comeback special and his multiyear residency in Las Vegas at the International Hotel. The film’s central thesis is that Parker’s financial needs led him to push Elvis to perform to the point of burning out the superstar that he turned to drugs to cope, facilitating his early death at the age of 42.

The tug-of-war between these two aspects of the film: Elvis biopic and Colonel Tom Parker character study, don’t always make for a smooth presentation, though it’s certainly fun to watch. In addition to a steady supply of Elvis music, Luhrmann as he is prone to do mixes in some anachronistic selections such as hip-hop to really set the mood.

The film is colorful and glitzy and offers a dazzling HD presentation with such detail that viewers can practically feel the sweat dripping from Elvis’ face.

The Blu-ray includes a number of featurettes that delve into the making of the film. The centerpiece is the 22-minute “Bigger Than Life: The Story of Elvis,” which covers the production in general. More specific topes are covered in the seven-and-a-half-minute “Rock ‘N Roll Royalty: The Music and Artists Behind Elvis”; the eight-minute “Fit for a King: The Style of Elvis,” about the costumes; and the seven-and-a-half-minute “Viva Australia: Re-creating Iconic Locations for Elvis,” about the challenges of building several decades worth of historical settings in the land down under.

Also included are a lyric video for the song “Trouble,” and a “Musical Moments” mode that allows viewers to jump to specific songs as they’re performed in the movie.