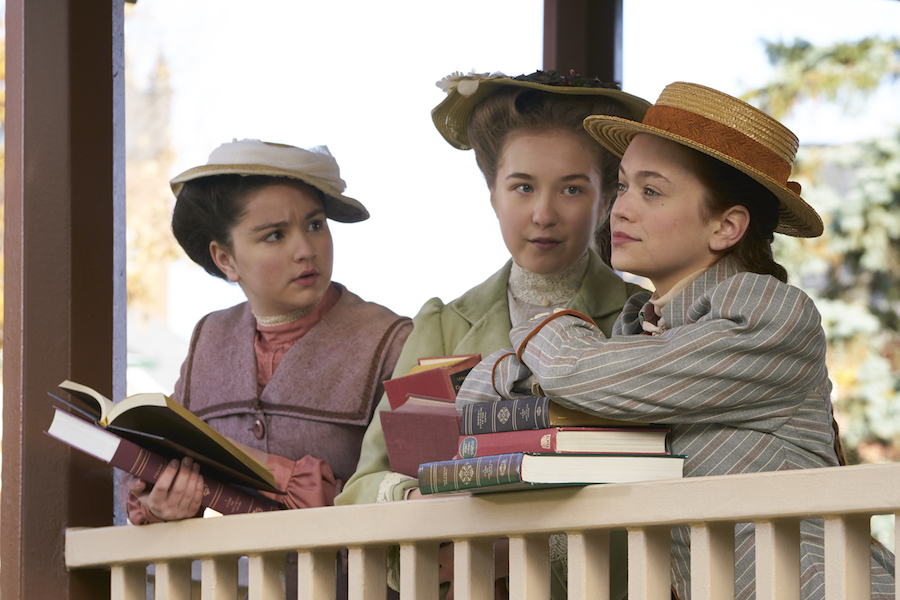 Anne of Green Gables — Fire and Dew, the third installment in the series based on Lucy Maud Montgomery’s classic story about a precocious orphan in the late-19th century, is available now on DVD and digital from PBS Distribution.

The first two installments are also available in a two-set DVD collection. 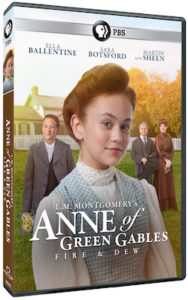 Fire and Dew (with an airing on PBS Sept. 23) follows Anne Shirley (Ella Ballentine) as she moves to Charlottetown from the Prince Edward Island hamlet of Avonlea and is overwhelmed by her new surroundings, difficult classes at the teacher’s college and a deepening romance with Gilbert. At the same time, her adoptive parents, siblings Matthew (Martin Sheen) and Marilla (Sara Botsford), deal with health and financial difficulties that jeopardize their lives at Green Gables. After Anne graduates, she must make an important decision, whether to move back home or continue on to university.

Ballentine has developed an admiration for the plucky titular character she plays.

“I love how strong she is,” she said. “Anne, right from when we’re introduced to her, has been through a lot of trauma but perseveres regardless. She has such a loving heart and is open to everyone. She doesn’t allow herself to be pushed around by anyone, not someone calling her names, not a silly boy, no one.”

“Anne deals with school and family struggles in Fire and Dew,” Ballentine said. “I feel like this is something almost everyone can relate to. School takes such a toll on our lives with the effort expected to be put in, and of course, family is a constant, so issues will occur. I think it makes Anne really reflect on what’s important to her. As a child, she was so curious and able to explore everything she chose, but these changes force her to step back and analyze where her time is better spent. She really matures in this film and makes bold choices.”

Marilla, too, is dealing with some emotional earthquakes in the third installment, but characteristically keeps a lid on any inner turmoil.

“She doesn’t want people to sympathize with her,” Botsfard said of her character. “She would hate that. And she would hate people to feel sorry for her. It’s just not in her nature at all. She is just such a survivor as a person. She doesn’t have frills in her life.”

It is a delicate balancing act for an actor to portray Marilla’s emotions under the surface, she noted.

“She spent her whole life tamping down those kinds of feelings, so part of what was fun about playing her was trying to get across the fact that she had emotional depth and wasn’t just hard,” Botsford said. “Her life is hard, and she is a person who has been taught just to get on with it and just make the best of things and don’t complain.”

The affectionate sibling relationship between Marilla and Matthew, likewise, isn’t full of gushing sentiment, but conveyed in gentle ribbing and unspoken looks.

“I love the relationship between Matthew and Marilla — calling him an Old Goat — just their relationship, what they understand about each other, despite their foibles, that they love each other and care for each other,” Botsford said. “It was really fun, of course, working with Martin [Sheen] because he’s a master at conveying a million thoughts with a simple look. He can express a lot in one nod of the head.”

The story of Anne has endured for more than a century, with multiple adaptations on stage, screen and television. Despite the different time period, many of Anne’s struggles are universal, Botsford noted.

“Lucy Maud Montgomery let her grow up, and so she didn’t stay stuck in childhood for us as readers and viewers,” Botsford said. “She wasn’t just this 11-year-old kid who was cute and impossible and thought some imaginative things. She allowed her to grow up and allowed us to follow her as she became an adult, and I think that’s part of why she endures so strongly as a character because she tackles things that everybody has had to have tackled some time in their life. Are they going to leave home? Are they going to go to school? What kind of sacrifices are they willing to make for the kinds of things that they want? And what kind of sacrifices are they willing to make for their family? And I think most people can relate to those things. Yes, it is a very, very different time, but those essential things that she is grappling with — going into maturity, love and boyfriends, and embarrassment — everyone’s experienced those. It doesn’t matter if it’s 2018 or when it is, and I think that’s probably why she endures.”

Though a young person living in a quite different time, Ballentine said she found things she and the classic heroine have in common — and things to learn from Anne.

“I would like to say I’m strong and independent like Anne. My friends would certainly say I am,” she said. “I’m a very loud feminist, haha. I did find, though, after filming, to learn from Anne. She’s very wise. She knows to live in the moment. Of course, it’s wonderful to dream of the future, but not to allow yourself to worry about it. I’m a very anxious person but I’ve really tried to adapt Anne’s way of living peacefully to my own life.”