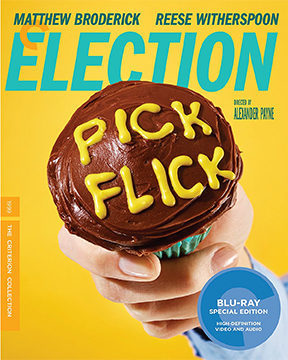 The novel upon which Alexander Payne’s Election is based drew its inspiration from the 1992 presidential election, and the disruption Ross Perot’s third-party bid brought to the two-party routine.

Now, it would be one thing if Tom Perrotta’s book simply translated that race into a high school analog. But that’s not quite what he did. The beauty of politics, at least from a storytelling perspective, is that when used as a storytelling template it can inspire any number of archetypal characters who can be identifiable in any era. Using a high school student body presidential election is just the brilliant metaphor that makes the story a timeless one, providing the foundation for a film that, if anything, might seem more relevant today than it did two decades ago.

Even in the first few years after the film’s release, people were drawing comparisons between its ambitious go-getter Tracy Flick (Reese Witherspoon) and Hillary Clinton. At one point, Flick even narrates a bitter monologue expressing her outrage that anyone else would work to usurp what she has worked so hard to achieve.

In the film, Tracy initially begins her presidential campaign unopposed. But then the teacher overseeing the election, Mr. McAllister (Matthew Broderick), takes umbrage with her sense of entitlement, and believes she must be stopped before her ambition is unleashed on the world. He also wouldn’t mind exacting a bit of revenge against Tracy for having an affair with another teacher that led to said teacher being fired.

The only wrench in Mr. M’s plan is Paul’s lesbian sister, Tammy, whose girlfriend dumps her in favor of Paul, inspiring Tammy to run for president on a nihilistic platform to get back at him.

The three-way race inspires all sorts of hilarious campaign tricks and confrontations on the way to a bizarre resolution.

Many of the bonus materials point to comparisons with the 2008 election, with Tracy as Hillary Clinton and Obama as the upstart seeking to take away what she feels she has earned.

However, it’s hard to deny that there may be even more parallels with the 2016 race, which is what makes this excellent Criterion Blu-ray edition so timely. With Tracy again serving as the Hillary analog, a large swath of viewers will no doubt find parallels between Donald Trump and Paul, the rich kid who decided to run just because he could. Certainly some of Tammy’s open antagonism toward the system could be attributed to Trump as well. The sense of the outsider swooping in to steal Tracy’s/Hillary’s thunder could also apply to Bernie Sanders. And that the film’s election involves allegations of cheating only strengthens the connections.

Of course, none of this would have been known to Payne or Perrotta so long ago, which is what makes this film so intriguing as time goes on. I suspect the film will be just as interesting when seen through the lens of 2040 or some other future election, much in the same way we might draw parallels from Mr. Smith Goes to Washington to our politics of today.

What really drives the comedy home, though, might be the way the narrative is divided to spotlight the unique perspectives of all the key players, in contrast to what the audience can see is actually going on. Paul may be a dumb jock, for example, but he doesn’t know that.

It’s in this regard that Broderick really shines as the hapless Mr. M, who constantly attributes profound significance to his mundane existence, which comes across as either hopelessly optimistic or extremely delusional (such as when, after being caught having an affair with the fired teacher’s wife and kicked out of his house, he considers it a chance at a fresh start. If only).

Interestingly enough, Perrotta’s manuscript went unpublished for several years until the film rights focused renewed interest on it, allowing its publication in 1998 just as the film was going into production.

The Blu-ray includes a good mix of vintage and fresh bonus material to really give a nice view of the picture.

There’s Payne’s commentary from the 1999 DVD, his 1990 UCLA thesis film, and a local Omaha newscast about the film’s production.

True retrospectives are offered in a new interview with Witherspoon, who looks fondly upon one of her earlier roles but also laments how it typecast her; and “Tru Inside: Election,” a 2016 TV documentary that really explores the impact the film has had so many years later, with interviews with several cast members and filmmakers. This documentary is also the only place on the disc to see footage from the film’s lackluster original ending, which was more in line with the book but which filmmakers felt negated all the bite the film had up to that point.