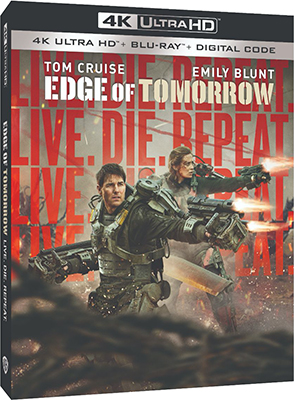 There’s always something fun about seeing characters trapped in a time loop, reliving a day over and over but looking at it each time from a slightly different perspective in an attempt to change the outcome. It’s certainly not a new concept for sci-fi or fantasy, with Groundhog Day being the best-known example (though “Star Trek: The Next Generation” had done a time loop episode a year before that movie came out).

Director Doug Limon’s highly entertaining 2014 film Edge of Tomorrow, based on the Japanese light novel All You Need Is Kill, put a fresh spin on the formula by making it a war movie, forcing its protagonist (Tom Cruise) to relive a bloody battle until he can unlock the secret to saving humanity from an alien invasion.

Cruise at the time seemed to be fully entrenched in a Charlton Heston phase, similar to how that legendary actor spent the middle-age portion of his career hammering out a series of science-fiction films. In the decade or so prior, Cruise had appeared in Minority Report and War of the Worlds, and had just come off of Oblivion from director Joseph Kosinski, with whom he would reteam for Top Gun: Maverick.

Thus, it’s quite amusing to watch the progression of Cruise’s character, Maj. William Cage, as he adjusts to his circumstance. In something of a parallel with Cruise’s own career, Cage begins the film as a smooth-talking military PR flunky who gets by on charisma alone, not unlike 1980s Cruise, until a vindictive general forces him into combat. The hapless Cage is quickly killed, but the circumstances of his death cause him to relive the day every time he’s killed. This allows him to hone his combat skills enough to become action hero Tom Cruise.

He finds an ally in Sgt. Rita Vrataski (Emily Blunt), who once experienced the same thing, and used her power to defeat the aliens in battle before it wore off. Turns out, the aliens are the ones resetting the day, adapting each time they lose so they can eliminate humanity’s defenses.

This gives Cage a clear objective. Find the source of the aliens’ ability to manipulate time, and destroy it. This really gives the film the feeling of a video game, with Cage as the player who has to start the level over each time he loses a life.

For his part, Limon says in the bonus featurettes that the film isn’t as much inspired by video games or alien movies as it is his reaction to what he doesn’t like about them, and his desire not to make a boring film that relies on cliché.

The film stretches its concept as far as logic allows, anticipating plot holes or questions the audience might have and then providing the answer. For example, there comes a point when Cage can’t keep Rita alive past a certain point, which only serves to highlight why he still needs her to carry out his mission. Sure enough, the next time through Cage tries it solo (though this leads to a new set of complications).

The editing is crisp, keeping viewers fully informed about what’s going on without the need for repeating events more than required. The visual effects are a nice mix of practical sets and CGI that look great in HD.

The film also subtly reminds viewers of our own cycle of warfare by linking the alien invasion to some of the famous battlefields of the two World Wars (particularly the beaches at Normandy).

Screenwriter Christopher McQuarrie had worked with Cruise on 2012’s Jack Reacher, and the creative team would align again in 2015 when McQuarrie took over directing duties for the “Mission: Impossible” franchise. He was also one of the co-writers on the Top Gun sequel.

At the time of its release, the biggest complaint about Edge of Tomorrow seemed to be that the studio saddled it with a sappy title that seemed better suited for a soap opera than a hard-boiled sci-fi actioner (for which the novel’s original title of All You Need Is Kill would have proved sufficiently badass). This might have hampered marketing efforts to built audience awareness, though the film still managed to earned more than $100 million domestically and bring in enough worldwide to double its budget. It enjoyed a second life and became something of a cult hit on home video, where the tag line “Live. Die. Repeat” was given such prominence in the packaging and promotional materials that fans and retailers assumed the studio had re-named it, leading to even more confusion about what the actual name of the film was.

There were rumors of a sequel in development that would have been called Live Die Repeat and Repeat, but the pandemic seems to have delayed production enough that the studio is now pursuing an HBO Max spinoff instead.

The Edge of Tomorrow 4K Ultra HD re-release includes the same bonus materials as earlier releases of the film. The combo pack has no extras on the 4K disc, and the regular Blu-ray is the same as previously released, offering a few inconsequential deleted scenes and about an hour’s worth of behind-the-scenes featurettes that focus mostly on the stunts and special effects.