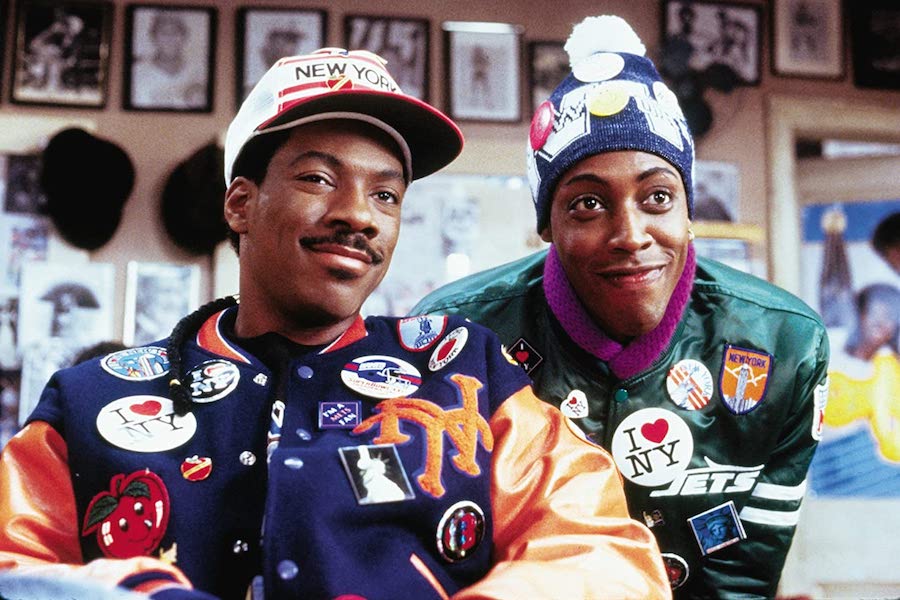 The Eddie Murphy classics Coming to America and Beverly Hills Cop will come out on 4K Ultra HD disc, and Trading Places and The Golden Child will come out on Blu-ray, Dec. 1 from Paramount Home Entertainment in anticipation of the debut of Coming 2 America.

All four films will also be available digitally.

Newly remastered in 4K with HDR from a supervised restoration by director John Landis, Coming to America will be available for the first time on 4K Ultra HD with digital copy in a limited-edition 4K Ultra HD Steelbook with themed mini-poster, or on 4K Ultra HD digital. Murphy stars as an African prince trying to find a princess. The mission leads him and his most loyal friend (Arsenio Hall) to Queens, New York.  In disguise as an impoverished immigrant, the pampered prince quickly finds himself a new job, new friends, new digs, new enemies and lots of trouble. Extras (previously released) include the following previously released special features in HD: “Prince-ipal Photography: The Coming Together of America”; “Fit for Akeem: The Costumes of Coming to America”; “Character Building: The Many Faces of Rick Baker”; “Composing America: The Musical Talents of Nile Rodgers”; “A Vintage Sit-Down with Eddie & Arsenio”; the theatrical trailer and photo gallery.

Beverly Hills Cop has been remastered in 4K with HDR and will be available in a 4K Ultra HD/Blu-ray combo pack with digital copy and is available now on 4K Ultra HD digital. Murphy plays Axel Foley, a street-smart cop from Detroit. Tracking down his best friend’s killer in Beverly Hills, Axel smashes through the local barriers in a hilarious, high-speed pursuit of justice. The 4K combo includes the following previously released special features: commentary by director Martin Brest, “Beverly Hills Cop — The Phenomenon Begins” (SD); “A Glimpse Inside the Casting Process” (SD); “The Music of Beverly Hills Cop” (SD); deleted scenes (HD); behind-the-scenes featurettes incorporating vintage 1984 interviews (HD); an isolated audio track of the original score by Harold Faltermeyer; “BHC Mixtape ‘84”, which allows viewers to go directly to the scenes featuring the hit songs “The Heat Is On,” “Neutron Dance,” “New Attitude,” “Stir It Up,” “Do You Really” and “Nasty Girl”; a location map; and the theatrical trailer (HD).

Newly remastered from a 4K film transfer supervised by director John Landis, Trading Places will come out on a limited-edition “Paramount Presents” Blu-ray Disc presented in collectible packaging that includes a foldout image of the film’s theatrical poster and an interior spread with key movie moments.  The film will also be available on 4K Ultra HD digital. In Trading Places, the very rich and extremely greedy Duke Brothers (Don Ameche and Ralph Bellamy) wager over whether “born-loser” Billy Ray Valentine (Murphy) could become as successful as the priggish Louis Winthorpe III (Dan Akroyd) if circumstances were reversed. Alongside the street-smarts of Ophelia (Jamie Lee Curtis), Winthorpe and Valentine are a trio ready for a revenge that culminates on the commodities trading floor in New York City. The “Paramount” Presents Blu-ray includes a new “Filmmaker Focus” with John Landis and access to a digital copy of the film, as well as the following previously released bonus content: deleted scenes; “Insider Trading: The Making of Trading Places”; “Dressing the Part”; “The Trade in Trading Places”; trading stories; an industry promotional piece; and the theatrical trailer.

Newly remastered from a 4K film transfer under the supervision of director Michael Ritchie, The Golden Child comes to Blu-ray for the first time as part of the “Paramount Presents” line. The limited-edition Blu-ray Disc is presented in collectible packaging that includes a foldout image of the film’s theatrical poster and an interior spread with key movie moments. The film will also be available on 4K Ultra HD digital. In the film, Murphy is the Chosen One, a social worker on a madcap mission to find the Golden Child, a young boy possessing mystical powers. Joined by Kee Nang (Charlotte Lewis), they battle the countless henchmen of Sardo Numspa (Charles Dance), the mysterious and evil cult leader holding the boy captive. The “Paramount Presents” Blu-ray includes a new featurette on the making of The Golden Child, as well as access to a digital copy of the film and the theatrical trailer.