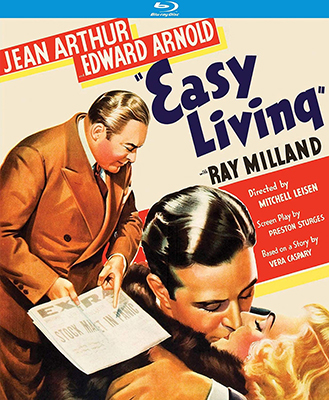 I’ve seen plenty of Easy Living title confusion in TV-listing screwups over the years, so let’s clarify. This version, here on a welcome new Blu-ray from Kino Classics, is Mitchell Leisen directing a great screwball cast in Preston Sturges’ first full-fledged comedy script; its title tune, heard here instrumentally, became a minor jazz standard when lyrics were added and was a big hit at the time for Billie Holiday. And then there was the alternative: 1949’s same-namer about professional football in which Jacques Tourneur directed Victor Mature and Sonny Tufts in jockstraps, though (the Production Code being what it was) this is not something we actually see. No Billie Holiday tie-in was forthcoming, though Moanin’ Low might have worked.

The 1937 Sturges-Leisen take is clearly superior (though the ’49 isn’t awful; Liz Scott, Lucille Ball and even Jack Paar are in it, too). But beyond the movie at hand’s madcap plot about a menial magazine employee whose life changes when a sable coat drops on her head, the earlier film has all the built-in art/set genius from the studio house pros who made Paramount films so much more interesting than their MGM counterparts in the black-and-white ’30s. And compounding this, we have Leisen, who was a standout production designer on his own before moving to directing (helping to achieve the “look” of the early Cecil DeMille pictures wasn’t a bad preliminary attention-getter on to have on your resumé).

Trouble is, some famous writer/director names — Sturges and, more famously, Billy Wilder — thought that was all he was, and it’s pretty well accepted history that Wilder was finally motivated to turn director over Leisen’s tinkering with the Wilder-Charles Brackett dialogue on 1941’s lovely Hold Back the Dawn (a recent Blu-ray from Arrow, and a long-coveted one). This hurt Leisen’s reputation in a trickle-down sort of way until revisionists later stepped in to even things out a bit.

Personally, I’ve never seen what the fuss was all about. Leisen lacked the ultimate razor-sharpness and did too many clunkers to qualify as a Wilder or Sturges, but when your output includes Midnight, Remember the Night, Hold Back the Dawn, Frenchman’s Creek (you should see this in a 35mm three-strip nitrate, as I have), Kitty, To Each His Own, No Man of Her Own, The Mating Season and some other comedies I haven’t mentioned, naysayers would be better off casting their stones with the velocity of a knuckleball. Even 1949’s loopy Bride of Vengeance, which did its best to screech-halt more than one major career, gave me a better time than expected, while the Sweet Marijuana number from the barely pre-code Murder at the Vanities wasn’t just a singular moment in movie history but a role model for my generation.

There’s no cannabis in Living, nor is there even much drinking, though an automat figures in one full-scale melee (probably the picture’s most famous scene) that’s kind of a cross between the knockout physical humor we’d later see in the Sturges-directed farces and that longshot hilarity in Blake Edwards’ Victor/Victoria in which agitated restaurant patrons begin scratching bug itches in St. Vitus form. The automat employs the Ray Milland character, but he isn’t anything like the film’s focus, at least for a while. But his father (Edward Arnold) is a Wall Street titan, the third-biggest banker in New York. In a fit of pique generated by huge frivolous expenditures by both wife and son, he tosses the former’s plush coat out of their ritzy residence in-town residence, whereupon it floats down several floors and onto the head of an innocent played by Jean Arthur as she sits in an upstairs public bus seat.

In fallout that anticipates the remarkably prescient Garson Kanin-Ruth Gordon-George Cukor It Should Happen to You released 16 years later (leaving aside countless real-life examples from today), Arthur then becomes, as we say today, famous for being famous. In her defense, she’s plainly guileless over what happens to her, and even were she more aware, she’d be plainly mortified. Instead, Arthur is mystified that clothing concerns want to give her even more duds on credit, that car makers offer her gratis limos because they want her to be seen driving it and that a going-bankrupt upscale hotel proprietor (hysterically funny Luis Alberni, the movie’s secret weapon) wants to put her up in the suite that one might have reserved for, say, Clark Gable or Shirley Temple. It even has an ornate sunken bathtub in which Shirley could float models of The Good Ship Lollipop.

There is, of course, more to this, thanks to a series of confused assumptions that are part and parcel of screwball comedy — as is the insane behavior by most of the principal and subordinate characters, who additionally don’t seem to be affected too much by the Depression. In this case, the mistaken assumption is that Arthur must be Arnold’s mistress and that it might be a good idea to stay on her good side. The entire plot shebang is very much in keeping with what several of the later Sturges-directed masterpieces at Paramount would be, what with protagonists who could go from hero to bum, bum to hero and back again in a zip. Think The Great McGinty, Hail the Conquering Hero or Sullivan’s Travels, in which Joel McCrea becomes, if not a literal bum, a literal hobo. (When I was in my short-lived career as a Cub Scout — short-lived because I Pledged the Allegiance to Elvis Presley at a pack meeting — my assistant den mother once explained to me that there was a distinction that a hobo was more than willing to work if food and a place to sleep called for it.)

Film historian Kat Ellinger, who’s getting a lot of work lately, is in for the commentary, covering most of what’s been mentioned here and a lot more. Her speaking voice isn’t exactly the female answer to Ronald Colman’s, but her instincts are sharp and her film knowledge wide. I was curious to hear Ellinger speaking of the great friendship between Milland and Leisen, who was a married bisexual but later more openly gay; the two apparently even competed in two-person yachting waggers. The only reason this struck me is that I can swear hearing on some recent Blu-ray commentary that Milland was something of a homophobe and that it had some kind of adverse effect on one of his co-stars. Oh, well: the only thing that matters in the end are the pictures, and the two made several together. Oddly, the director’s career best were non-Milland’s, excepting Kitty (a period romp I’ve liked since I was a kid, with arguably Paulette Goddard’s best role and performance).

Kino’s release isn’t one of those 4K jobs of a ’30s movie like, say, Criterion’s My Man Godfrey or the Sony Frank Capra digital spiff-ups that are like tube-riding the tallest slide in the waterpark, but it’ll give young idea of the elegant gloss that was Paramount back in the day — and back in the day when a budding generation of enthusiasts grew up with them on TV from the late ’50s through the middle ’60s. Easy Living really does impress me as a movie Depression escapists would have loved for its portrayal of a humble working woman who suddenly has riches thrown into her lap, especially if the theater’s air conditioning were working to make it a really relaxing night out.