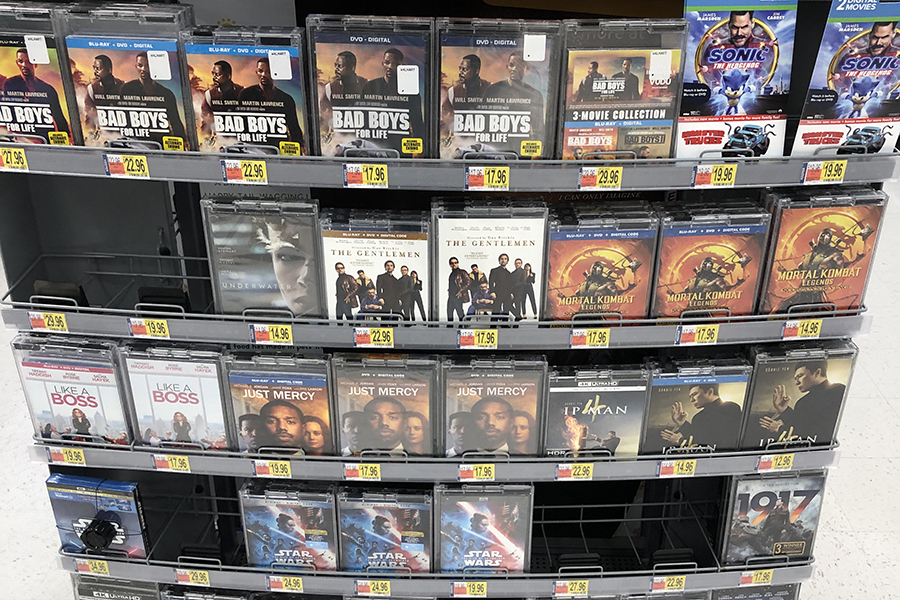 The boost in home entertainment options stemming from the stay-at-home phase of the coronavirus pandemic has apparently sparked a slight resurgence from an old friend: good ol’ DVD.

The 23-year-old standard-definition disc format has seen rapid declines for more than a decade with the rise of high-definition disc, digital delivery and streaming options. But the three-week period from April 19 to May 9 saw sales of film and TV content on DVD post the format’s best year-over-year showing in nearly seven years.

Put another way, for the three-week period as a whole, the DVD format was up 14.4% in revenue and 12.5% in unit sales compared with the same three weeks a year ago.

The top title for the weeks ended April 25 and May 2 was Bad Boys for Life, and for May 9 it was Bloodshot, both Sony Pictures releases. The charts were also boosted by lingering performance from earlier hit releases such as Disney’s Star Wars: The Rise of Skywalker and Sony’s Jumanji: The Next Level.

In terms of revenue, this is the first time DVD saw yearly gains two weeks in a row since April 2014, when Frozen was driving industry sales. It’s the first three-week gain since late-August 2012, when The Hunger Games and Battleship were the top titles.

From the perspective of unit sales, it marks the first two-week year-over-year gain just for DVD since Star Wars: The Force Awakens hit the charts in April 2016. And it’s the first three-week gain since the Christmas season in 2012.

The recent spike may owe to a variety of factors beyond a renewed interest in home entertainment from citizens waiting out the pandemic at home. Streaming services and digital sales were on the rise prior to the pandemic, and shelter-in-place orders only aided their momentum. According to the NPD Group, even DVD and Blu-ray players have seen sales gains compared with last year around this time.

An increase in just the older DVD format could be the result of an increase in impulse bargain bin buys during grocery runs, especially at stories such as Walmart and Target where $5 catalog DVD sections are common. However, the average cost of a DVD is actually up 1.74% during the three-week period, indicating sales of the newer titles are significantly contributing to the surge.

Also, the selection of titles offered during the comparable period in 2019 seems to have been especially weak compared with now. The box office performance of titles released during the three-week period is up 25% over the same period a year ago, though most of that owes to Bad Boys for Life.

The top titles from the year-ago period were the second week of Glass, the sixth week of Aquaman, and the debut of The Lego Movie 2: The Second Part.

It also seems that the recent top releases have audiences that prefer the DVD version compared with other big-screen hits. For example, Bad Boys for Life during the three weeks saw about a 50/50 split between Blu-ray and DVD formats.

Compare this with movies such as Star Wars: The Rise of Skywalker or Frozen II, which each saw more than 70% of their unit sales for their first three weeks on shelves come from Blu-ray formats. Bad Boys for Life hews more toward the Blu-ray performance of Hobbs & Shaw (55% Blu-ray its first three weeks) or Jumanji: The Next Level (54%). Bloodshot’s first-week Blu-ray share was 57%.

The gains by DVD also pushed overall disc revenue and unit sales (DVD and Blu-ray combined) in the respective weeks up over the comparable week the previous year. it’s the first three-week year-over-year overall revenue gain since March 17 to 31, 2018, when Justice League, Jumanji: Welcome to the Jungle and Star Wars: The Last Jedi arrived to market in consecutive weeks. And it’s the first three-week overall unit gain since Force Awakens and The Revenant were driving sales to a four-week uptick in April 2016.

In the second quarter so far, however, DVD is only down about 9.7% in revenue and 8.8% in units sold compared with the previous year. In the first quarter, DVD was down about 22.3% in revenue from the first three months of 2019, and down 25.3% in revenue during that same period.

For comparison, Blu-ray Disc is down 12.8% in revenue and 17.7% in unit sales in the second quarter compared with the year-ago period. In the first quarter, Blu-ray was down 23.5% in revenue and 24% in units sold.