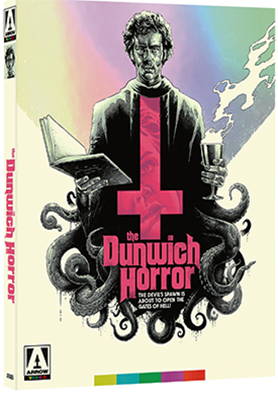 Hold the fright and pass the psilocybin. When 2001: A Space Odyssey’s ballyhoo promised ticket-holders a seat on “The Ultimate Trip,” they weren’t just referring to space travel. All of a sudden, films were endowed with their own psychedelic variations on Kubrick’s Stargate sequence. Even Disney responded by re-releasing Fantasia as a “head” picture meant to lure acid-soaked hippies to view Mickey through the windowpane. What accounts for The Dunwich Horror’s ‘M’-rated sex scenes shot through a dishtowel is anybody’s guess.

If what I read is correct, fans of H.P. Lovecraft’s short story, upon which this was loosely based, despised the American International Picture’s adaptation. The studio had been kicking around an adaptation for almost a decade, first with Mario Bava as director and later with Peter Fonda in the lead. Released hot on the heels of Roger Corman’s acclaimed Poe Cycle and directed by his protege, Daniel Haller, the King of the B’s was looking to spark a successful formula on a new gothic theme. It’s handsomely designed — prior to this, Haller worked as an art director on dozens of films, many of which were signed by Corman. Alas, the shocks are pretty childish; the Vincent Price predecessors never relied on blue-skinned bugaboos to do the horrific heavy lifting.

The set-up promised a weird blend of horror and psychedelia that it couldn’t keep. With the only copy of the Necromicon aka the Book of the Dead in his possession, student of the occult Dean Stockwell, glassy-eyed, never blinking, hypnotizes career virgin/college student Sandra Dee into playing sacrificial lamb in his mind games. Stockwell looked the part, but his character fails to mesmerize or incite dread. Hollywood old-schoolers Ed Begley and Sam Jaffee were both the victims of haunted hairdos. Begley’s toupee outperforms him at every turn, while Jaffe appears to have colored his beard and Isro (a Yiddish Afro) with a black Sharpie® for the flashback sequences. After a three-year absence from movies, this was to be Dee’s comeback film, her first since parting ways with Universal Studios. Wikipedia notes that Dee, “referred to her past 25 films with Universal as ‘all rotten.’” If Douglas Sirk’s monumental remake of Imitation of Life is rotten, then Sandra Dee is her generation’s answer to Dame Judi Dench.

After a brisk first half-hour, the film kicked the crutch of logic from beneath its underpinnings, setting it limping down a path to hocus-pocus-dominocus. Having missed seeing it on its original release in 1970, it’s taken a lifetime to prove that I could have lived without The Dunwich Horror. Arrow’s Special Edition 2K Blu-ray contains a new commentary track by Guy Adams and Alexandra Benedict, scads of interview material, an image gallery, collector’s booklet, and a trailer that’s so bad it’s good.