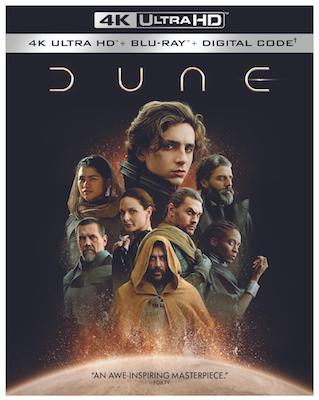 Efforts to adapt Frank Herbert’s landmark 1965 sci-fi novel Dune have been met with mixed results over the years.

The 1970s saw Alejandro Jodorowsky envision a 10-hour movie version, and when that fell through, producer Dino De Laurentiis grabbed the rights and hired Ridley Scott to give it a go as a follow-up to Alien, though the scope of the project proved too daunting for him as well.

Then David Lynch came on board, choosing to adapt Dune over, among other projects, directing Return of the Jedi. His version finally arrived in 1984 after a troubled production and massive edits to bring his three-hour initial cut to a bit over two hours for the theatrical release, a running time that so crammed Herbert’s story that it was generally panned by critics for being incomprehensible.

The Sci-Fi Channel in the early 2000s had a bit better luck with a pair of miniseries based on Dune and a few of Herbert’s sequels to it, earning ratings success while leaving fans of the books to continue to clamor for a worthy big-screen version.

Director Denis Villeneuve’s interpretation seems to have met those aspirations.

Villeneuve’s Dune presents the narrative as a sweeping epic of galactic politics and feuding families, marked by stunning visual splendor and scope.

Covering roughly half of the first book, Dune: Part One, as it is announced on screen, tells the story of a desert world named Arrakis, thousands of years into the future when humanity has colonized the vast expanses of outer space and formed an empire to control it, led by wealthy and influential families. The planet’s sands provide the only known source of the spice Melange, a substance with mind-altering properties that makes celestial navigation possible.

The Emperor has ordered the House Atreides, led by Duke Leto (Oscar Isaac) to take over administration of Arrakis from Baron Harkonnen (Stellan Skarsgård). Leto’s son, Paul (Timothée Chalamet), begins having visions of living among the Fremen, remnants of the tribes that originally inhabited the planet.

The Fremen are experts at surviving the harsh desert environment and dealing with the giant native sandworms that roam beneath the surface, both depositing the spice and menacing the efforts to extract it. Paul is rumored to be a prophesized messiah to the Fremen.

The Atreides will not have an easy time of it on Arrakis, however, as it quickly becomes apparent that their appointment to govern the planet is a trap by the Emperor and the Harkonnens to diminish their power, if not eliminate them altogether by a full-scale assault on the planet.

Villeneuve places the emphasis on the human and character aspects of the story, rather than the more bizarre sci-fi elements that seemed to fuel Lynch’s version.

At around two-and-a-half-hours, he also takes 20 more minutes than Lynch to tell half the story, allowing it to breathe by not trying to cram the density of the first book into a single movie, as the 1984 version did.

To make sure viewers who didn’t read the book are not left completely baffled, long early stretches of the film are very heavy in exposition, explaining who the families are, the Fremen and the culture of Arrakis. But this is all necessary worldbuilding endemic to any good sci-fi franchise and should continue to pay off with future installments.

Savvy viewers may have noticed the influence the original novel had on countless burgeoning sci-fi franchises in the years it took to get a movie adaptation off the ground, with “Star Wars” and its desert world of Tatooine being the most notable example. Because of this, some fans might find a lot of similarities between this latest Dune movie and some recent “Star Wars” shows set on Tatooine, such as “The Mandalorian” and “The Book of Boba Fett.”

The exposition provided in the film is expanded upon in the Blu-ray bonus materials, with an eight minute featurette about the Royal Houses, and 10-and-a-half-minutes of video encyclopedia entries similar to the ones Paul watches in the film in order to learn about Arrakis.

The Blu-ray also includes nearly an hour of behind-the-scenes featurettes as well, with individual videos focused on the usual things like production design, cinematography, costumes and visual effects

Some dig deeper, such as a creating the makeup effects used to create the Baron’s bloated physique. Another looks at the fighting styles used to give the battle scenes a heightened since of verisimilitude. Others show how the visual effects team pulled off the film’s unique vehicles, as well as the giant worm attacks; the longest is an 11-minute examination of the film’s distinctive sound design and Hans Zimmer’s musical score.

Collectively, they demonstrate the precision and craftsmanship that went into constructing the film.