The week of Jan. 11 sees Dune and Halloween Kills make their way to Blu-ray and DVD, while Marvel’s Eternals becomes available for home viewing via digital channels. 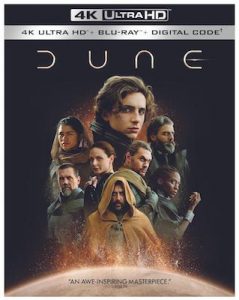 Warner Bros. Pictures and Legendary Pictures’ Dune: Part One arrives on 4K Ultra HD Blu-ray, Blu-ray and DVD  Jan. 11. Dune, which has garnered more than $397 million at the global box office, was directed by Denis Villeneuve (Arrival, Blade Runner 2049) from a screenplay he co-wrote with Jon Spaihts and Eric Roth, based on the novel of the same name written by Frank Herbert. The film stars Timothée Chalamet (Call Me by Your Name, Little Women), Rebecca Ferguson (Doctor Sleep, Mission: Impossible — Fallout), Oscar Isaac (the “Star Wars” franchise), Josh Brolin (Milk, Avengers: Infinity War), Stellan Skarsgård (TV’s “Chernobyl,” Avengers: Age of Ultron), Dave Bautista (the “Guardians of the Galaxy” films, Avengers: Endgame), Stephen McKinley Henderson (Fences, Lady Bird), Zendaya (Spider-Man: Homecoming, TV’s “Euphoria”), Chang Chen (Mr. Long, Crouching Tiger, Hidden Dragon), David Dastmalchian (Blade Runner 2049, The Dark Knight), Sharon Duncan-Brewster (Rogue One: A Star Wars Story, TV’s “Sex Education”), with Charlotte Rampling (45 Years, Assassin’s Creed), with Jason Momoa (Aquaman, “Game of Thrones”), and Oscar winner Javier Bardem (No Country for Old Men, Skyfall). Dune tells the story of Paul Atreides (Chalamet), a brilliant and gifted young man born into a great destiny beyond his understanding, who must travel to the most dangerous planet in the universe to ensure the future of his family and his people. As malevolent forces explode into conflict over the planet’s exclusive supply of the most precious resource in existence — a commodity capable of unlocking humanity’s greatest potential — only those who can conquer their fear will survive.

Spencer, starring Kristin Stewart, is being released on DVD and Blu-ray Jan. 11 from Distribution Solutions, Neon and Decal. In the film based on the life of Princess Diana, the marriage of Diana and Prince Charles has long since grown cold. Though rumors of affairs and a divorce abound, peace is ordained for the Christmas festivities at the Queen’s Sandringham Estate. The film is an imagining of what might have happened during those few fateful days. In addition to Stewart (“The Twilight Saga,” Charlie’s Angels, Snow White and the Huntsman), the drama also stars Timothy Spall (Harry Potter and the Deathly Hallows: Part 1 and 2, Sweeney Todd: The Demon Barber of Fleet Street), Jack Farthing (“Poldark”) and Sean Harris (Mission Impossible, The Green Knight). Spencer is directed by Pablo Larrain (Jackie). Read a review here.

Cobra Kai: Season 3 arrives on DVD Jan. 11 from Sony Pictures Home Entertainment. “Cobra Kai” takes place over 30 years after the events of the 1984 All Valley Karate Tournament with the continuation of the inescapable conflict between Daniel LaRusso (Ralph Macchio) and Johnny Lawrence (William Zabka). Season three finds everyone reeling in the aftermath of the violent high school brawl between their dojos, which has left Miguel in a precarious condition. While Daniel searches for answers in his past and Johnny seeks redemption, Kreese further manipulates his vulnerable students with his own vision of dominance.

The action-horror thriller Amityville Uprising will be released on demand, for digital purchase and on DVD Jan. 11 from Lionsgate. A chemical blast at a military base sets off a supernatural disaster in the action-horror thriller. As Sgt. Dash tries to keep the peace at the local police station, the explosion unleashes a toxic acid rain that dissolves the flesh of anyone trapped in it. Even worse, it causes the dead to rise again and attack the living. Dash and fellow officer Nina Rossi must figure out who is friend and foe, fend off the attacks, and defend their colleagues until the savage cataclysm subsides.

Shout! Studios Jan. 11 releases through digital channels “Diary of the Grizzly Man,” a miniseries about Timothy Treadwell, who spent 13 years in the Alaskan wilderness, studying the park’s grizzly bears, before one of those bears killed him. The three-hour miniseries is crafted from Treadwell’s vast film archive. Treadwell arrived in Alaska’s Katmai National Park in 1990 and stayed there until October 2003, when one of the bears he was studying killed him.  Treadwell left behind photographic and written diaries of his life with the bears and foxes. Directed by Timothy Treadwell, “Diary of the Grizzly Man” was produced by Erik Nelson and Jewel Palovak, the producers of Werner Herzog’s acclaimed documentary Grizzly Man. The new miniseries contains never-before-seen footage and still photographs of Treadwell’s interactions with very wild nature — dangerous interactions that would ultimately lead to the death of Treadwell and his girlfriend, Amie Hugarnard. Along with this footage, Treadwell’s personal diaries are read by his close friend, actor Warren Queeny. The original score for this series is written and performed by the renowned guitarist and songwriter Richard Thompson. 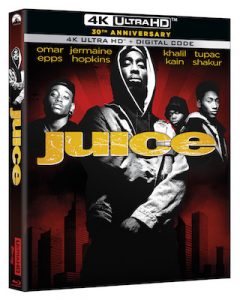 The 1992 film Juice, starring Omar Epps and Tupac Shakur, is being released on 4K Ultra HD for the first time Jan. 11 from Paramount Home Entertainment, marking its 30th anniversary. A Steelbook edition of the 4K Blu-ray also will be available. The gritty film, which continues to be celebrated for its realistic portrayal of Harlem life and the early New York hip hop scene, follows Q, Raheem, Bishop and Steel, who spend their days hanging out and looking for a way to get the power and respect they call Juice. Q hopes to earn respect by becoming a scratch ‘n’ mix DJ.  Bishop has a deadlier plan — take it through an armed robbery with his crew. Juice is the feature directorial debut of cinematographer Ernest R. Dickerson, whose collaborations with Spike Lee include Do the Right Thing and Malcom X. It features a soundtrack that includes Eric B. & Rakim, Naughty by Nature, Big Daddy Kane and Salt N’ Pepa. 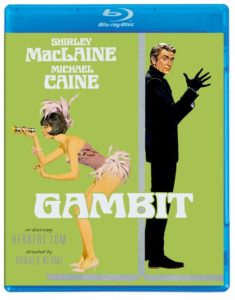 Kino Lorber Jan. 11 releases the 1966 heist comedy Gambit, starring Michael Caine and Shirley Maclaine. The film, from director Ronald Neame, is being released under the independent supplier’s Studio Classics banner. Gambit takes off in Hong Kong, where a dapper English cat burglar (Caine) enlists the aid of a Eurasian dancer (Maclaine) to help him in an elaborate scheme to grab an age-old artifact from the heavily secured palace of a powerful Middle Eastern tycoon (Herbert Lom, The Pink Panther Strikes Again). Unfortunately, the foolproof scheme begins to backfire shortly after it starts and the duo must pull out all the stops if they hope to come out on top.  The film features music by Maurice Jarre (Lawrence of Arabia) and Technicolor cinematography by Clifford Stine (Bedtime Story).

Jan. 12 sees the arrival of Disney-owned Marvel Studios’ Eternals for sale via digital platforms, as well as for streaming on Disney+. Eternals, which has generated $164.8 million at the North American box office, and $401.8 million globally, follows a group of ancient heroes from beyond the stars who have protected Earth since the dawn of man. When monstrous creatures called Deviants, long thought lost to history, mysteriously return, the superheroes are forced to reunite in order to defend humanity once again. The ensemble cast includes Gemma Chan, Richard Madden, Kumail Nanjiani, Lia McHugh, Brian Tyree Henry, Lauren Ridloff, Barry Keoghan, Don Lee, Kit Harington, Salma Hayek and Angelina Jolie. It arrives on Blu-ray Disc, DVD and 4K Ultra HD Blu-ray Feb. 15.