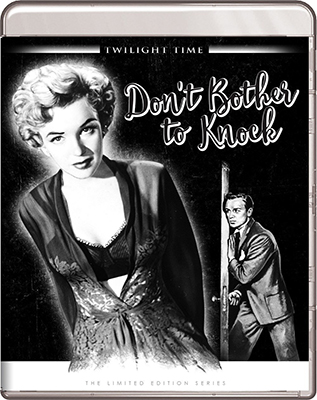 Filmed on three or four simple sets and clocking in at just 76 minutes, Don’t Bother to Knock is an unusual movie for Marilyn Monroe to have made just as she was on the brink of the Twentieth Century-Fox superstardom that was obviously on Darryl Zanuck’s mind (along with, it wouldn’t surprise anyone to hear, one of two other things). Though professionally speaking, Julie Kirgo notes in another of her well-researched Twilight Time essays, that he did make Monroe test for the part, a lesson that one wonders if he forgot when it came to Bella Darvi.

Knock was one five movies that marked Monroe’s 1952 output — along with two Fox comedies, a cameo in the opening segment of the studio’s all-star anthology O. Henry’s Full House and a loan-out to RKO for Clash by Night. Though the last was a drama, she didn’t have to carry large chunks of it, but in Knock, she has to bring off a case of frightening bonker-dom brought on by her lover’s death — an emotional condition that ends up threatening a child’s life.

It’s a somnambulant performance somewhere between effective and one she gets away with — though some will tell you that I’m underrating it, and possibly so. Call Monroe’s approach a second cousin, say, to Kim Novak’s deadpanned dialogue deliveries in Vertigo, though the passage of time has pretty well rendered Novak’s turn a complete success, no matter how she and Alfred Hitchcock got there. Monroe, of course, just got better as she aged, which more people should have told her at the time.

The surprise for me here (or at least something I’d forgotten) is how sympathetic lead Richard Widmark’s characterization is — as an edgy guy not exactly imaginable as, say, some neighbor’s backyard-barbecue invitee but one who ends up being sincerely moved by Monroe’s plight. This unlikely duo gets thrown together because her elevator-operator uncle (Elisha Cook Jr., getting a little extra something out of his role) has ill-advisedly elected to set her up as a one-shot babysitter in the hotel that employs him, not long after she’s been released (too soon) from an institution. After squabbling with his hotel chanteuse squeeze (Anne Bancroft in her feature debut, a component that’s not without interest itself) over his lack of commitment, Widmark sees Monroe through an adjacent hotel window and thinks her might get lucky with her as a one-night companion.

Well, she does have a bottle of booze plus some glasses in the room — but also a younger girl (Donna Corcoron, real-life sister of Kevin “Moochie” Corcoron and Noreen Corcoron of Bachelor Father), who is probably going to be traumatized by what happens or at least have some good material later in life if she ever decides to become a short-story author. The kid’s parents (Lurene Tuttle and Jim Backus in a tux) are no further away than downstairs for dad to get some kind of award involving his newspaper career, but the evening didn’t exhaust Tuttle’s in-room perfume supply, which means there’s some for Monroe to apply (so much of it that Widmark immediately notices). Alcohol, perfume … say, what else can Monroe make hers? Well, there’s always Tuttle’s negligee to put on for much of the movie’s running time — and with its owner just a few floors away, and you just know that no good is come of this. No one ever talks about this, but I think one of the most compelling angles of this story is poor Uncle Elisa learning that no good deed goes unpunished. You have to believe that this longtime employee with the corny jokes (he says his job has “its ups and downs”) is going to get canned after what eventually happens and that his resumé won’t have a very satisfactory answer to the question: “Reason for leaving last job.”

Fox was obviously trying to figure out what to do with Bancroft: She’s a singer here, then did a commercially DOA Sol Hurok biopic (Tonight We Sing), and then there was Gorilla at Large, whose lunacy was possibly a good warm-up for enjoying a happy real-life marriage with Mel Brooks. Despite her presence and that of a lot of welcomely familiar faces, this is Widmark, Monroe and Cook all the way.

Yet let it be said that the faces include the ever ubiquitous Willis Bouchey, who must have fought it out with rank Ferguson and Ray Teal for the “hardest-working white man in show business”; December Bride’s Verna Felton as an ancient biddie — and one who shares a frame with Monroe for contrasting views of womanhood; Joan Blondell’s real-life sister Gloria, who played “Honeybee” on TV’s The Life of Riley; and even the actor who played the police pathologist on the first go-round of “Dragnet” and eyeballed the gradations on the bullets dug out of the human versions of Joe Friday’s workday.

So as Kirgo notes, the result is “unexceptional if always entertaining.” Future Peckinpah right hand Lucian Ballard shot it (no Verna Felton in those collaborations), and the director was Roy Baker (aka Roy Ward Baker), whose later bragging rights over The One That Got Away, A Night to Remember and Quatermass and the Pit just by themselves made him more than a journeyman. And for a movie that’s relatively obscure, I’ve run into not a few people who harbor kind of toasty feelings for it and its sympathetic treatment of mental illness (and, of course, Monroe’s mother spent a lot of time I institutions).

This said, the reviews at the time were only fair, and in the capital city that would soon be my home turf, one of the downtown movie palaces bolstered the bill (or tried to) by adding Models, Inc., with Howard Duff (he’s back), Coleen Gray and — deep down in the cast — Joe E. Ross (hey, I think I’d like to see this). To bolster the Blu-ray, Twilight Time has also included the Richard Widmark “Biography” episode that they’ve issued before and another from that same Fox-associated TV series, this time devoted to Monroe. It gets into the actress’s marriages and, of course, her once famous battles with her home studio — though there’s not even a still photo from MGM’s The Asphalt Jungle to mark how important John Huston’s best movie was to the breakthrough part of her career.