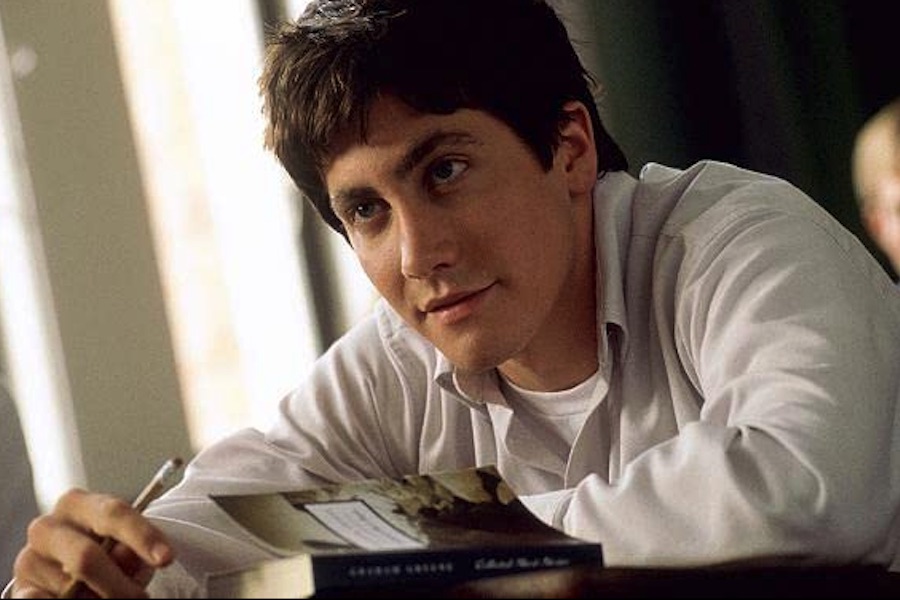 Donnie Darko on 4K Ultra HD Blu-ray, Elvira: Mistress of the Dark on Steelbook Blu-ray, and two 1970s cult films on Blu-ray, Switchblade Sisters and Death Has Blue Eyes, are available in April from Arrow Video and MVD Entertainment Group. 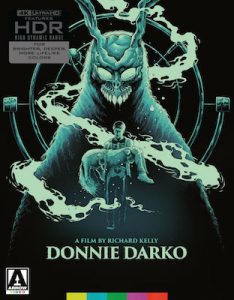 Richard Kelly’s debut feature Donnie Darko (2001) is coming to 4K Ultra HD Blu-ray April 27 in a two-disc set that includes both the theatrical and director’s cut. Initially beset with distribution problems, it would slowly find its audience and emerge as a cult classic. Donnie is a troubled high school student: in therapy, prone to sleepwalking and in possession of an imaginary friend, a six-foot rabbit named Frank, who tells him the world is going to end in 28 days, 6 hours, 42 minutes and 12 seconds. During that time, he will navigate teenage life, narrowly avoid death in the form of a falling jet engine, follow Frank’s maladjusted instructions and try to maintain the space-time continuum. Described by its director as “The Catcher in the Rye as told by Philip K. Dick,” Donnie Darko stars Jake and Maggie Gyllenhaal, Patrick Swayze, Drew Barrymore, Mary McDonnell, Katharine Ross and Noah Wyle and features a soundtrack of 1980s classics by Echo and the Bunnymen, Tears for Fears and Duran Duran. The new 4K restorations of both the theatrical cut and the director’s cut from the original camera negatives by Arrow Films were supervised and approved by director Richard Kelly and cinematographer Steven Poster and feature Dolby Vision. The release includes a 100-page hardcover book featuring writing by Nathan Rabin, Anton Bitel and Jamie Graham; an in-depth interview with Richard Kelly; an introduction by Jake Gyllenhaal; and contemporary coverage, illustrated with original stills and promotional materials. It also includes a double-sided fold-out poster featuring newly commissioned artwork by Luke Preece; six double-sided collector’s postcards; and limited edition packaging with a reversible sleeve featuring original and newly commissioned artwork by Luke Preece. Both discs include numerous extras, including commentaries and featurettes. 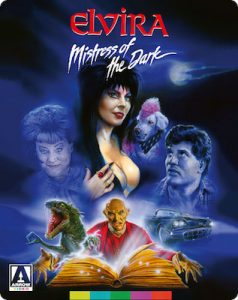 Horror icon Elvira’s big screen debut Elvira: Mistress of the Dark (1988) is coming to Blu-ray in a Steelbook special edition April 27. In the film, having just quit her job as a Los Angeles TV horror hostess, Elvira receives the unexpected news that she’s set to inherit part of her great aunt Morgana’s estate. Arriving in the small town of Fallwell, Mass., to claim her inheritance, Elvira receives a less than enthusiastic reception from the conservative locals — among them, her sinister uncle Vincent, who, unbeknownst to Elvira, is in fact an evil warlock secretly scheming to steal the old family spell book for his own nefarious ends. Elvira: Mistress of the Dark helped solidify the horror hostess (played by Cassandra Peterson) as a major pop culture icon. Featuring a 2018 restoration from a 4K scan of original film elements, the release includes an introduction by director James Signorelli; 2017 audio commentary with Signorelli, hosted by Fangoria editor emeritus Tony Timpone; 2017 audio commentary with Patterson Lundquist, www.elviramistressofthedark.com webmaster and judge of U.S. TV show “The Search for the Next Elvira”; “Too Macabre – The Making of Elvira: Mistress of the Dark,” a 2018 version of this feature-length documentary on the making of the film, including interviews with various cast and crew and rare never-before-seen archival material; “Recipe for Terror: The Creation of the Pot Monster,” a 2018 version of this featurette on the concept and design of the pot monster, as well as the film’s other SFX; original storyboards; extensive image galleries; original U.S. theatrical and teaser trailers; a limited edition Steelbook featuring newly produced artwork; and a limited edition booklet featuring a foreword by writer and director Sam Irvin and writing on the film by Kat Ellinger and Patterson Lundquist. 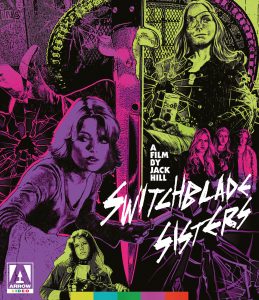 From Jack Hill, director of Spider Baby, Coffy, Foxy Brown and The Swinging Cheerleaders, comes the 1975 grindhouse classic Switchblade Sisters, due on Blu-ray April 27. In the film, Lace (Robbie Lee), the leader of inner-city girl gang the Dagger Debs, meets her match when new girl Maggie (Joanne Nail) moves into the neighborhood. Mistrust and conflict turn to friendship as the girls end up in Juvenile Detention together at the mercy of abusive guards. Meanwhile, the Dagger Debs’ male counterparts the Silver Daggers have to contend with the arrival of a new gang, led by the villainous Crabs (Chase Newhart). But when the girls get back on the streets, a planned retaliation strike in tandem with the Silver Daggers backfires and puts Lace in hospital. Maggie assumes control, teaming up with Muff (Marlene Clark) and her gang of African-American militants from across town to declare all-out war, but there’s a traitor in their midst. Extras include a new audio commentary by historians/critics Samm Deighan and Kat Ellinger; “We Are the Jezebels,” an archival documentary featuring director Jack Hill, producer John Prizer, casting director Geno Havans, production designer B.B. Neel, stunt coordinator Bob Minor, and stars Joanne Nail, Asher Brauner, and Chase Newhart; “Gangland: The locations of Switchblade Sisters,” an archival documentary in which Jack Hill and filmmaker Elijah Drenner revisit the shooting locations; Jack Hill and Joanne Nail at the Grindhouse Film Festival, a 2007 archival interview with the director and actor; an interview with Jack Hill, Robbie Lee and Joanne Nail, an archival 1990s interview with the director and stars in conversation with Johnny Legend; galleries of behind the scenes stills, international posters, video covers and lobby cards; theatrical trailers; a reversible sleeve featuring original and newly commissioned artwork by the Twins of Evil; and, for the first pressing only, an illustrated collectors’ booklet featuring new writing by Alexandra Heller-Nicholas and Heather Drain. 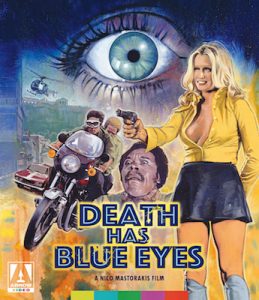 Available now is Death Has Blue Eyes (1976) on Blu-ray, a paranormal action thriller from the director of the cult classic Island of Death (1976). In the film, when local gigolo Chess (Chris Nomikos) greets his vacationing friend Bob Kovalski (Peter Winter) at Athens airport, the pair embark on a string of scams and erotic dalliances that eventually lead them into contact with an elegant wealthy woman Geraldine Steinwetz (Jessica Dublin) and her glamorous daughter Christine (Maria Aliferi). Geraldine blackmails the two bachelors into acting as bodyguards for Christine, whom it transpires has telepathic abilities and has had her eye on them for some time. After fleeing from a series of assassination attempts, it soon becomes clear that Geraldine herself might not be quite who she seems, as the two young men find themselves caught up in a political conspiracy of international dimensions. In his debut feature, filmmaker Nico Mastorakis presents viewers non-stop car, bike and helicopter chases, a bevy of beautiful girls with guns, softcore sex scenes, psychic thrills, and Cold War political intrigue set against the picturesque landscapes of 1970s Greece. The release features a new restoration from the original camera negative approved by the director; two versions of the film, the widescreen 1.85:1 version and the full-frame 1.33:1 version; an exclusive new interview featurette with Nico Mastorakis; an exclusive new interview with actress Maria Aliferi; “Dancing with Death,” tracks from the Death Has Blue Eyes original soundtrack; original theatrical trailers; an image gallery; a reversible sleeve featuring original and newly commissioned artwork by Graham Humphreys; and, for the first pressing only, an illustrated collectors’ booklet featuring new writing by Julian Grainger.