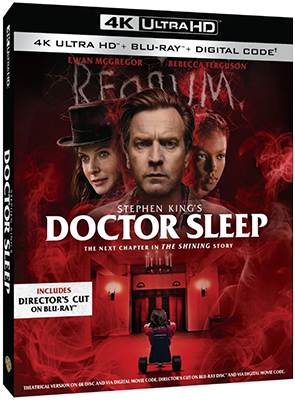 It’s not exactly a secret that Stephen King didn’t much care for Stanley Kubrick’s 1980 adaptation of King’s 1977 novel The Shining. King’s distaste for the film was even a plot point in the 2018 film version of Ready Player One.

So it’s a bit remarkable, then, that King, serving as executive producer of the adaptation of his 2013 sequel Doctor Sleep, would allow the film to quote so much of Kubrick’s work.

Somehow, director Mike Flanagan has managed to make a film that both faithfully follows Kubrick’s version of The Shining while reconciling the differences between the source material and the film that irked King to begin with. The result is one of the better King adaptations, a terse game of supernatural cat-and-mouse that manages to be far more interesting than other recent King-to-screen efforts such as the bloated It: Chapter Two.

Like the book, the film picks up the story of young Danny Torrance, the little boy tormented by his father in The Shining, as he grows into a troubled adulthood (where he’s played by Ewan McGregor). Like his father, Dan has descended into alcoholism, turning to booze to drown out the traumas of his experiences at the Overlook hotel.

But he has also learned to deal with the ghosts that sought him due to his telepathic powers, and after reaching rock bottom manages to sober up and get a job at a hospice, where he uses his powers to help the terminally ill die peacefully, earning the nickname “Doctor Sleep.”

His telepathy also puts him into contact with others with the shining power, including a young girl named Abra (Kyliegh Curran). She alerts Dan to a cult of shiners led by Rose the Hat (Rebecca Ferguson) who seek immortality by murdering innocent children to claim their youth.

Dan then must take steps to protect Abra when the cult decides to come after her next.

Flanagan re-creates sequences from The Shining, albeit with different actors embodying the spirit of the original film, to effectively bridge the time gap between the two stories. The use of different actors can be a bit uncanny for those familiar with Kubrick’s film, especially if watched back to back with The Shining, since Flanagan admits he didn’t feel the need to go down the rabbit hole of digital re-creations of the original actors as long as he stayed true to the characters. He does a nice job matching Kubrick’s visual style, however, re-creating specific scenes and even using the original film’s music to good effect. Flanagan’s script also references plot elements of the second book that weren’t fully carried over into the film version.

As much as the film is a journey for Danny to reconcile traumas of his youth with the potential for using his abilities to help the world, so too it seems is it a chance for King to embrace the legacy of Kubrick’s version, which is often considered one of the greatest horror films of all time. In interviews before the theatrical release of Doctor Sleep, he spoke to elements of Flanagan’s screenplay that redeemed Kubrick’s version for him, and he echoes those sentiments in the home video bonus materials, in which he seems very much to have softened his stance toward the original film.

Indeed, the sequel does provide some deeper context for what transpired at the Overlook in the first film while giving Dan a chance to atone for his father’s demons.

The Blu-ray includes a three-hour director’s cut, which runs about a half-hour longer than the theatrical cut. There aren’t really any scenes that change the meaning of the work, but the new material does give the story a chance to breathe by developing the characters a bit more. There are also more scenes of young Danny and his mother that take place shortly after The Shining, deepening Danny’s personal story and enhancing the film’s effectiveness as a psychological thriller while making it more of a bridge between King’s and Kubrick’s interpretations of the first novel.

Really, the director’s cut is the definitive version of the film, so anyone who hasn’t seen it should probably just start there.

Included are three featurettes running a bit more than a half-hour in total that are aimed at fans intrigued by the prospects of a King-approved sequel to Kubrick’s Shining. The 14-minute “The Making of Doctor Sleep: A New Vision” deals with the general making of the film, the five-minute “From Shining to Sleep” provides an overview of how the filmmakers went about trying to connect the disparate movie and film versions of King’s vision, while the 15-minute “Return to the Overlook” focuses on re-creating the iconic sets of the first film.