With more than 73 million subscribers through the most-recent fiscal quarter, Disney eyes Latin America as the platform’s next big growth sector after India. 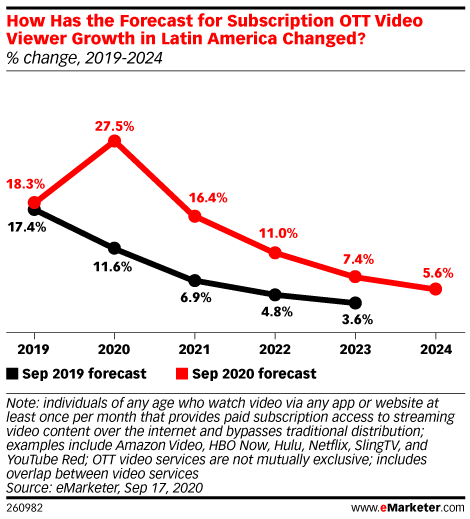 Research firm eMarketer says Latin America has become a prime focus for SVOD services largely because of its improving digital infrastructure and the growing need for indoor entertainment throughout the coronavirus pandemic. A May 2020 survey from McKinsey & Company revealed that nearly 64% of adults in Mexico reported spending more time watching video content during the pandemic than they did normally.

“We now expect the number of subscription OTT video viewers in Latin America to grow by 27.5% this year to 117.2 million,” analyst Matteo Ceurvels  wrote in a post. “That’s a roughly 16-percentage-point increase from the 11.6% growth we previously anticipated in our September 2019 forecast.”

“What’s more, HBO Max and Hulu will be rolling out in these markets in 2021,” he wrote.