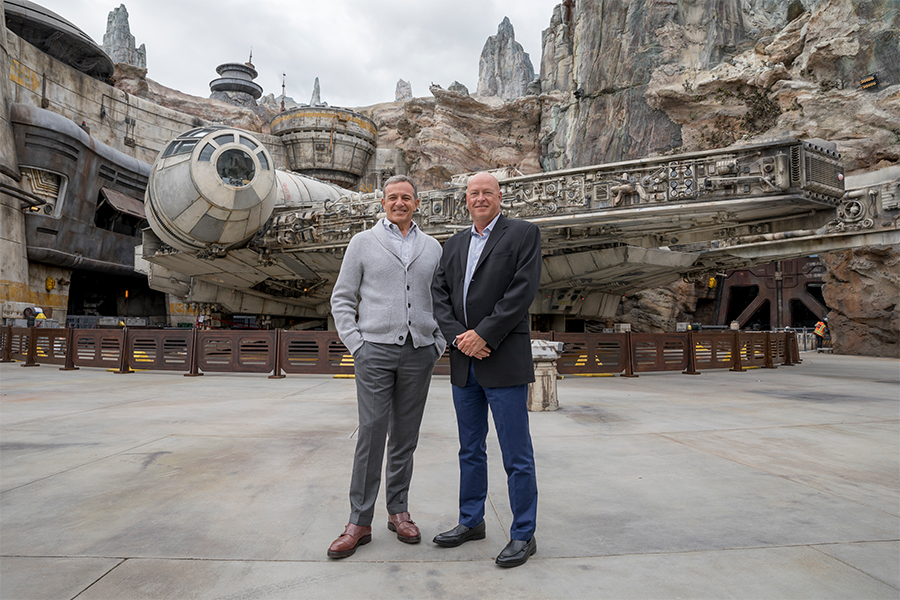 (L-R): Bob Iger and Bob Chapek at the opening of Star Wars: Galaxy’s Edge at Disneyland. (Photo by Business Wire)

While some media companies have set aside tens of millions of dollars for displaced workers and production personnel, The Walt Disney Co. is cutting salaries and perks to senior executives as its business units get hammered from all directions due to the coronavirus pandemic.

With nearly all business segments either idled or severely curtailed due to shutdowns and consumer quarantines in major markets, Disney will subject its senior executives to significant payroll cuts and related perks, effective April 5.

According to a regulatory filing, former CEO Bob Iger, who earlier this year transitioned to executive chairman, will forgo his entire $3 million salary, in addition to the use of a company car. Disney will still pay Iger his health care benefits.

Iger’s successor, Bob Chapek, will have his $2.5 million salary cut in half. In addition, general counsel Alan Braverman, CFO Christine McCarthy, human resources chief Jayne Parker, and head of corporate communications Zenia Mucha will see 30% cuts to their base salaries.

Disney said that except for the amount of compensation for paid time off, the salary reductions are not intended to reduce any company employee benefit provided to executives that is determined by reference to the base salary payable, except as may be required at law.

Chapek is still eligible for a bonus of “not less than 300% of the annual base salary,” according to a SEC filing. He is also in line for “a long-term incentive award having a target value of not less than $15 million” for each fiscal year of the agreement through Feb. 28, 2023.

“There remains virtually no visibility as to when sports and Hollywood content production will resume and re-openings for theme parks and theaters will take place — we assume beginning of June,” Mitchelson wrote. “As for the media business, the depth of ad declines is also uncertain.”

It should be noted that base salaries are what constitutes the majority of Disney’s payroll taxes and related employee costs. The bulk of senior executive compensation revolves around stock options, which are based on, and compensated by, the stock market.

Indeed, Iger received total compensation in excess of $66 million in 2018 and $47.5 million in 2019 — the bulk of it stock options and bonuses, including a combined $18.5 million if he remained employed with the company past July 2, 2019, and closing of the Fox studio acquisition.

The Disney board  later rescinded the Fox bonus (after fiscal contributions plummeted) and Iger voluntarily forfeited the employment deadline perk.