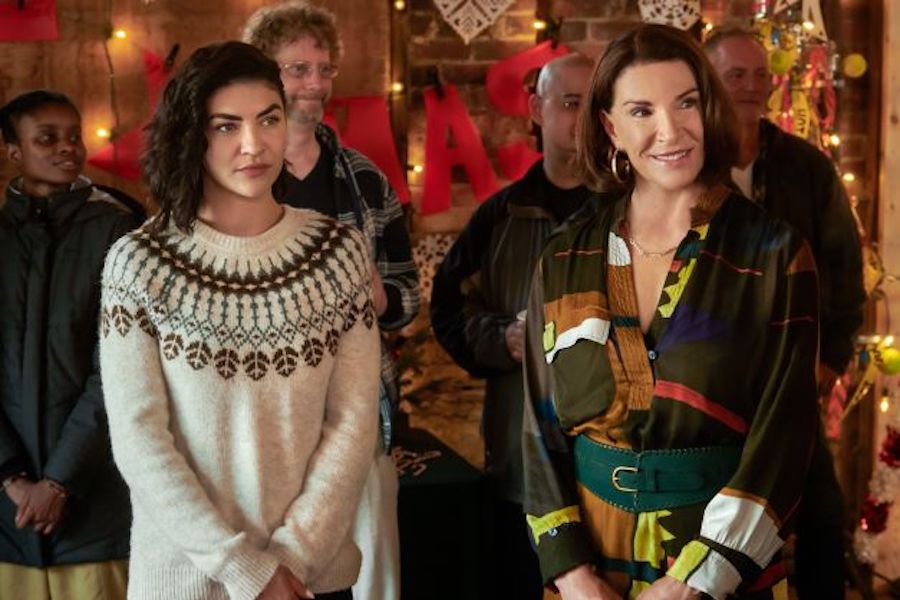 In Designing Christmas, interior designer Stella (Jessica Szohr) and contractor Pablo (Marco Grazzini) have charmed millions as co-hosts of their popular home renovation show. Although Stella is planning her wedding with fiancé Jack (Mykee Selkin), a last-minute production change means that she and Pablo must work overtime to keep their hit show on schedule. Stella confides in her mentor Freddy (Hilary Farr) about her complicated feelings for Pablo that could jeopardize everything.

A Gingerbread Christmas finds Hazel Stanley (Tiya Sircar) spending the holidays with her father Ted (Sugith Varughese) in Chicago, where she discovers the family bakery is in decline. Hazel, who hopes to save the family business by winning $100,000 in a gingerbread house competition led by food celebrity Mark Clemmons (Food Network’s Duff Goldman), finds unexpected romance with local contractor James Meadows (Marc Bendavid), who is helping to restore the bakery.

A Christmas Open House stars Katie Stevens as Melissa Norwood, an ambitious Atlanta property stager, who joins forces with her old high school crush David Phelps (Victor Rasuk) to sell her newly married mom’s home in their small Georgia hometown with some additional help from artists Henry and Sarah Wright (HGTV’s Ben and Erin Napier). As the tensions of the Christmas deadline grow, so does a romance between Melissa and David, but their diverging goals could be a deal breaker for their new relationship.

Due Nov. 1 on the streaming service is Mary McCartney Serves It Up, in which photographer and food writer Mary McCartney invites her celebrity friends to cook and chat in her kitchen in London. Mary serves up fast, delicious and comforting vegetarian family favorites in under 20 minutes or less.

Nov. 3 comes Tut’s Lost City Revealed. It follows archaeologists who have discovered a 3,000-year-old “lost golden city” in Egypt — the “largest” ever found there and the most important find since the tomb of Tutankhamun. The city, called “The Rise of Aten” was unearthed by a team of archeologists led by Zahi Hawass under the sand on the western bank of Luxor, about 300 miles south of Cairo.

Due Nov. 7 is “Inside the Heist.” It reveals the wilder-than-fiction ways real criminals pulled off the most audacious and lucrative heists in recent history. Each of these iconic crimes took months, sometimes years, to plan and prepare, and required unique skills and bespoke techniques which had to be rehearsed and honed until they were absolutely perfect.

Streaming starting Nov. 19 is Vardy vs Rooney: The Wagatha Trial, which goes inside the story of the trial. Rebekah Vardy, wife of England International soccer striker Jamie Vardy, sued Coleen Rooney, wife of retired England Captain Wayne Rooney, for libel. Coleen had claimed Rebekah was responsible for the leaking of private stories. In an investigation worthy of Agatha Christie, she’d planted fake stories which only Rebekah’s account could see. Her infamous social media post “It’s …… Rebekah Vardy’s account” went viral. There was mass trolling of Rebekah, including death threats. With exclusive insights from her legal team, Rebekah speaks out about becoming public enemy number one and denies the allegations.

Due Nov. 27 is “Written in the Stars,” a new reality/dating series that puts contestants’ love lives in the hands of the world’s top astrologers. In this social experiment, 12 single strangers, all desperate to find love and each representing one of the 12 signs of the zodiac, arrive at a mysterious villa in Greece to find they have been matched with someone in the group. Globally renowned astrologers Colin Bedell, Michelle Knight and Francesca Oddie match the contestants using just their birth charts and work tirelessly to help them get to know each other and ultimately fall in love.

Finally, streaming starting Nov. 30 is the CNN Original Series”Stanley Tucci: Searching for Italy,” in which Academy Award nominee and Emmy Award-winning actor Stanley Tucci indulges his passion for Italian cooking as he explores the stories and people behind the world’s most popular cuisine. Tucci, who is Italian on both sides, brings us on his journey to the bustling food markets and hidden trattorias of the Italian peninsula to discover the secrets and delights of its cooking, region by region. Across four episodes, audiences have a front row seat to experience Liguria, Puglia, Sardinia and Calabria.